This blog does not have a hint of violence or political intrigue!

Sometimes you don't see what is 'just under your nose! Every day I take Perdy for a walk at her favourite place, mainly because she enjoys meeting her friends there. Yes, dogs do have friends; the doggie kind, and people they like. You just have to watch their tails when the afore mentioned meet to understand that.
The round trip to the 'Bay' is about 10kls, meaning that I probably travel an extra 70 kilometres  a week, not an insignificant cost when one is looking at the not too distant future when 'retirement' will mean a curtailment of expenses. (See my older DIJATC--blogs)
Today I took Perdy to the beach that is less than one kilometre away. It even has an off-the-leash area, where I can legally let her loose. We parked the car in the upper car park and I let her out, whereby she bounded down the path to the grass area. She waited impatiently while I caught her up. I can do that  a lot quicker these days! Being 45 kilos lighter makes one hell of a difference to the speed one operates at.
I threw her ball, down the hill sloping towards the beach. She was off in a flash, diverting slightly to chase some cheeky magpies and then let it bounce once before grabbing it between her trusty teeth. We repeated the exercise for a few minutes before heading on down to the actual beach.
The tide was way out, leaving an expanse of slippery /mud/sand. Normally I would have avoided this combination, especially when I was heavier. I hate to think what would have happened if I came a cropper by slipping and twisting something. I very much doubt I would have been popular if someone had to help me back up to the distant car! But now---- no issues at all.
This time we ventured far further than we had in the past. I threw the ball along the mud, but stopped when I realized that there were sharp shells. I did not want Perdy to cut her paws; mind you---she wasn't complaining.
I followed Perdy down to the waters edge. In this part of the Manukau Harbour, the channel is quite close to the shore. Perdy jumped into the water after the ball, faithfully returning the orange orb and asking for more!
On the way back we met a guy heading for the channel with two fishing rods. It had not entered my thoughts to try fishing there, especially at low tide. The guy informed me that he caught good sized Snapper and Kahawai. Mmm--- I just know who is going to accompany me fishing very soon.
Later, back at the car park, I had this cool feeling--why always travel when something this good can be had, oh so close to home. PLUS---with the new ME, it isn't hard to skip on down the path. I almost feel like a kid again.
www.authorneilcoleman.com 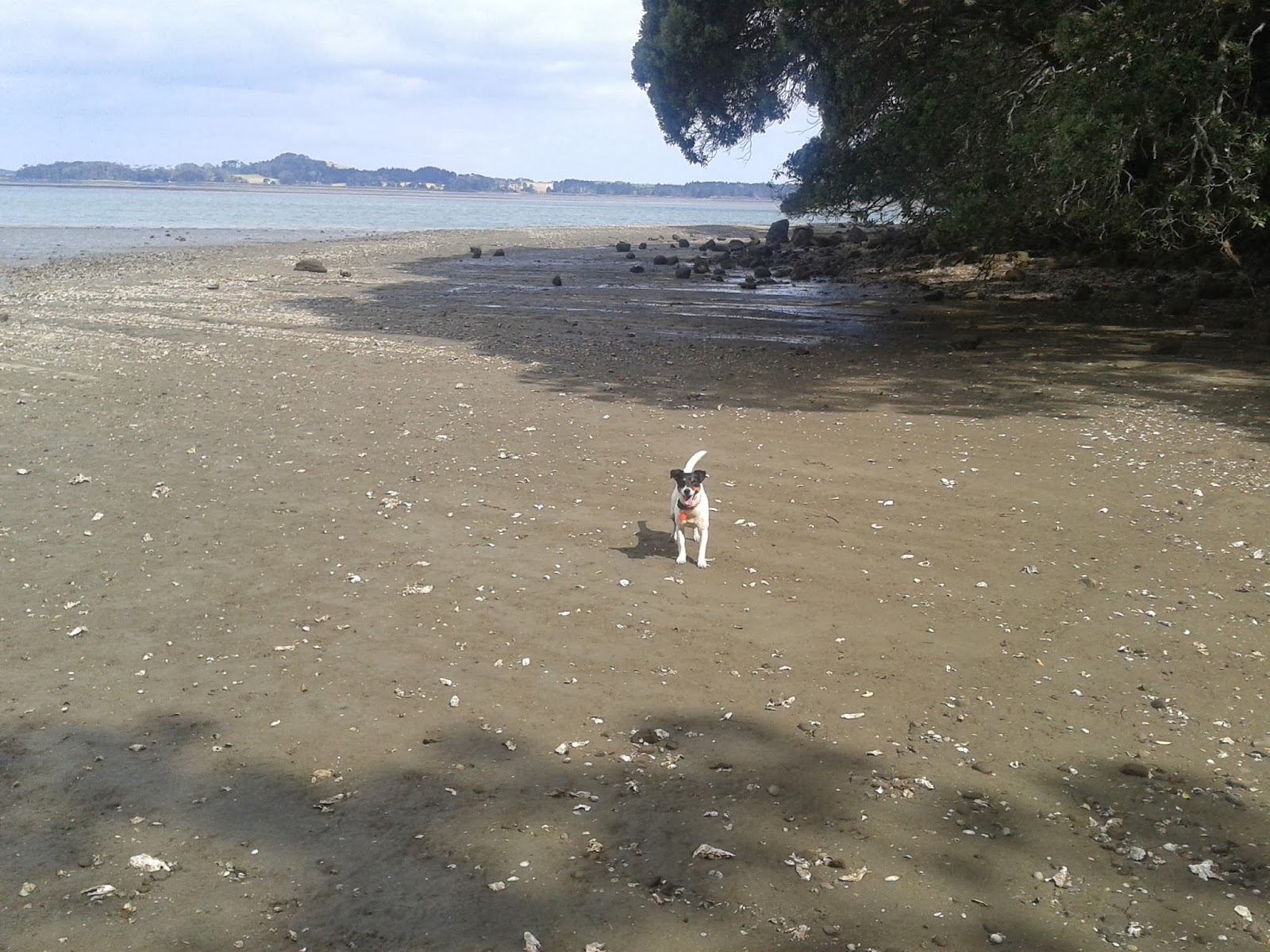 Come on Dad---throw the ball! 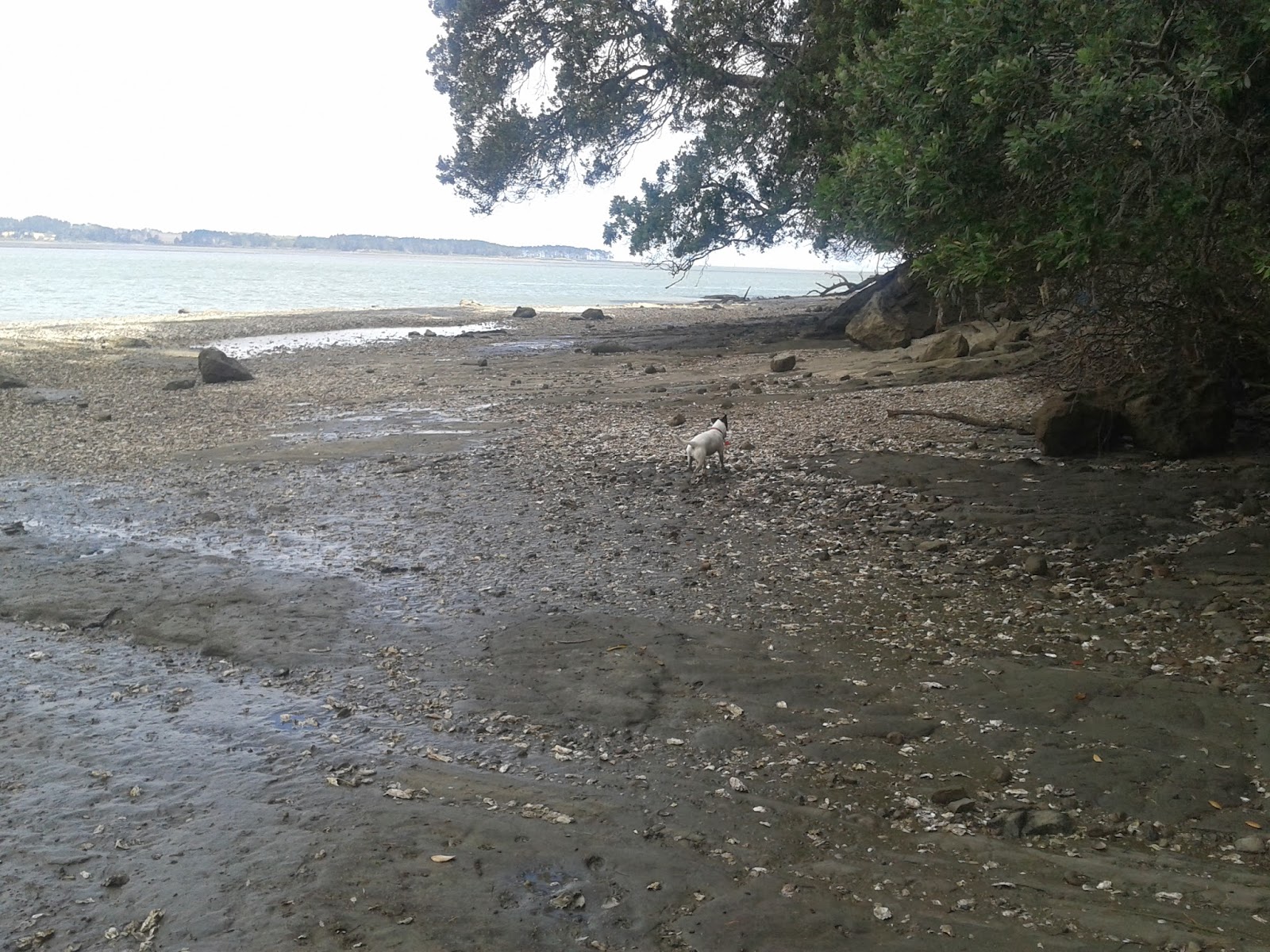 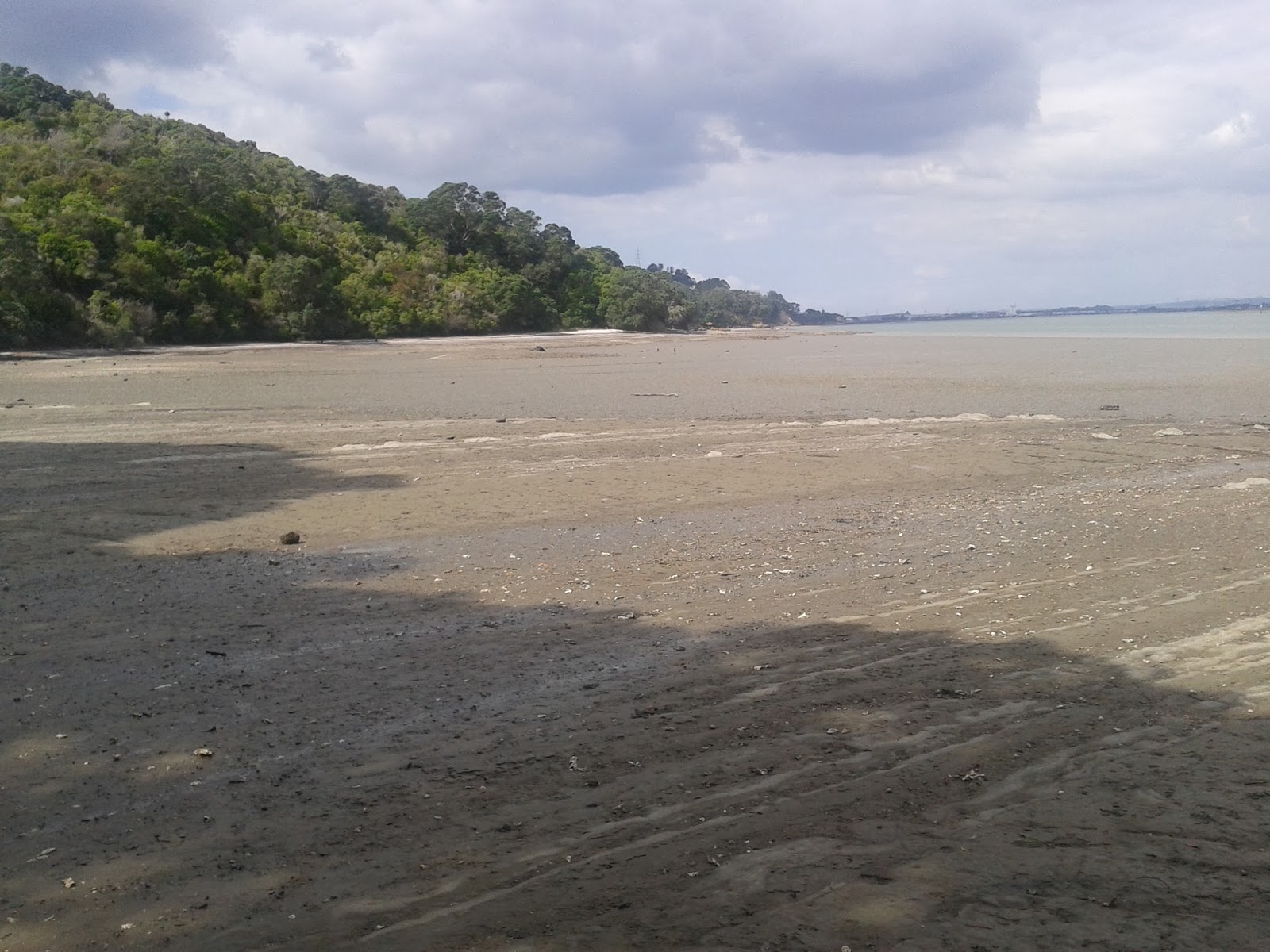 It's so 'Perdy' eh Dad!
see me!
Posted by www.authorneilcoleman.com at 8:53 PM No comments:

Russia will find an excuse to invade Ukraine!

Russia has put its forces on alert on the pretext that Russians living in the Crimea are in danger and that it must protect its Black Sea Fleet. These are merely excuses for what it has intended for a long time---to reclaim what it once had as part of the Soviet Empire. While it is true that there are a large number of  Russians living in the Eastern part of Ukraine and that they favour stronger ties with Russia and indeed may even wish to return to the Russian fold, that does not excuse a military intervention on the part of the 'back-to-the-past, Russia.'
Russia is going down a road very similar to what Hitler did when he invaded Poland at the start of WW2, using the pretext that German citizens were endangered. History does repeat and I sincerely hope that the result is not a conflagration that could draw in the armed forces of Europe and the USA. Step back before it is too late, Russia (and the USA need not make inflammatory statements) and enter a dialogue to find out what the Ukrainian people wish, even of that means some sort 'partition.' This is not the time for 'big power bullying, from 'any' source! There must be a peaceful resolution because the alternative is just too terrible!
www.authorneilcoleman.com
Posted by www.authorneilcoleman.com at 8:22 PM No comments:

2014 has been called a ‘bloggers heaven,’ particularly if they are observers of politics. It’s is election year in New Zealand and I am going to join the group of people who regularly contribute their ‘unbiased’ thoughts. I admit to favouring the slightly ‘left of centre in NZ,’ and I openly own up to having joined the Labour Party; however if that means that I come in for some stick for criticising party policy or individuals, then I fully expect to earn some rebuke or even to get tossed out of the party. Being in a party has never sat comfortably with me; if that means following the party line, so maybe I have sown the seeds of my own expulsion by admitting to these ‘serious political failings.’
I am not going to sit by and watch stupid games that are so often played by members of all political parties, especially at election time. I am not going to take as the ‘truth,’ utterances from party leaders or minions, just because that is ‘their policy!’
When I hear or read about ‘policy’ that resonates with me I shall say that I like it, be it from Labour, the Greens or anyone else. Where I see stupidity I shall also highlight it. If I find that I have said something that is wrong, re policy or any other comments I have made, I shall say I am wrong or have changed my mind.
New Zealand is at a crossroads as to what we want for our future. We have sold off much of what is valuable re our State Assets. We have gone down a pathway that is driven by economic theory that claims ‘Trickle Down’ as its basis. I believe this to be a misnomer; it should have been called ‘Trickle Up,’ because that is what has happened. A smaller tiny group at the top now owns about 85% of the wealth in NZ. I find this abhorrent. The gap between rich and poor has never been as large, in my lifetime that is.
With the above statement, I think you can see where I am at the moment, and I admit to having that colouring my viewpoint. But, once again, when I listen to some of the statements by some politicians on the Left/Green alliance, I am sometimes not in agreement. Equally, occasionally, I hear and read policy from the National Party that is not totally divergent from my own beliefs. That does not make me a National Party supporter. Let’s face it: much of the legislation passed in parliament, is supported by both major parties!
NZ First also holds true to a few policies that, due to my ‘age’ feel comfortable for me. Hey I want to be able to use my Gold Card in a few years so watch out any political who meddles with the gains that Winston has helped to bring about!
OK, the scene is set. Take this posting as NUMERO UNO!
www.authorneilcoelman.com

Posted by www.authorneilcoleman.com at 3:45 PM No comments:

The 'season of plenty and promise,' is nigh in New Zealand.

March is nearly upon us in New Zealand and I always feel the abundance and promise of a wonderful ‘harvest,’ of all things good that NZ produces at this time of the year. Sure, apples and other fruit have ben available in their delightful tasty freshness for a few months now, but it is the flush of harvest at this time of the year that delivers so much promise. It seems that everything, from wine to whisky and the crispy offerings from the soil are now in abundance. It times gone by, housewives (that’s how it was then folks) were busily engaged in salting, preserving and later freezing the abundance from the backyard gardens and orchards. That still happens to a degree, hopefully with the help of the ‘partner,’ in whatever form he or she may take, but the source of the sheer profligate produce may be from places other than the urban garden.
Still, one cannot help noticing the displays in our fruit shops and supermarkets as well as the stalls on the roadsides. We should dip our fingers into our pockets or bring out the ‘cards’ and celebrate this incredible time of the year. It is a time that ‘shows up NZ as truly being 100% pure,’ despite the detractions we had in the past year.
May we all enjoy the benefits of living ion this wonderful country. Go forth and sample the delights; be it from a bottle or the gardens.
www.authorneilcoleman.com
Posted by www.authorneilcoleman.com at 10:54 AM No comments: