When your solar oven doesn't quite measure up for 'real cooking.'

I have been ranting about my solar oven for a few months now, and the only food I have cooked is one vegetable dish and dried some Bay Leaves. Today I washed my sports shoes and I needed them for a walk in a few hours. You know what's coming. Yes, I died them in my solar oven and it took about 90 minutes. Whether they are dry or cooked, is another matter. Oh well, at lest the 'pathogens' will be gone, eh. So all the 'preppies' and survivalists will be having really clean, dry and healthy shoes! Now all I have to do is 'eat them.' 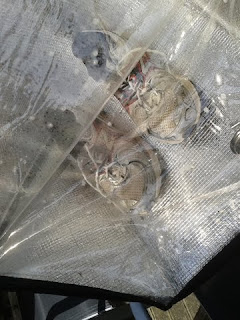 Sometimes I just want to turn the news off!

Today, I arose from my bed, had a lovely breakfast of scrambled eggs with cheese and mushrooms (but I was still down on the scales!  ---below 77kilos) and considered the tasks I needed to complete; the washing, dishes (OK, I lied about the dishes) and a few other necessary household-cohesive duties. Perdy, our Jack Russell was being patient, probably because she had read the signs; I wasn't going to work so it must be walkies time soon.
THEN I TURNED ON THE NEWS!
An item featuring one of the Pussy Riot ladies and her totally over the top punishment for what we would see in New Zealand as a nuisance issue, rather than a major breach of the law. Sure, it wasn't the brightest way to show opposition to a regime that is looking more and more like that of the old Tsarist or Communist examples of the past. For Russia it feels like there is an inbred psyche that is formed by a history of suffering and unbridled brutality of those in power. Just for a few years after the fall of the Soviet regime was there a glimmer of hope but then the selfishness of the ruling oligarchy rose from the depths from which they probably never sunk to. It seems that the ever-suffering mass of the people were going to have whatever brief gains they had made, stripped away from them. Putin and his cohorts merely replaced and in some cases were joined by those forces that the Russian people had dared to believe had 'had their day.' No such luck! Russia is rapidly heading 'back to the future;' nothing has changed. Sure there is an aura of wealth in the Russian capital and the shops are full of luxury consumer goods. The only difference is that that old 'Party' does not hold hegemony over who buys and is allowed access to the glittering shops. What stays the same is that a small elite who  can afford them; the holders of political and financial power, and they do not intend to give up their privileged status.
Before readers in the USA, Europe, Australia and New Zealand spout on about how much better we are, then they need only look at the stance taken by some Republican (Tea Party members, especially) and they will see another version of that nasty, selfish 'hold-on-to power,' at all cost mentality that pervades the corridors of power in Washington. The gap between rich and poor in the USA and in other 'Western Democracies' is also  an endemic fact. We see it in New Zealand; the same forces who would take what little some of the citizens at the bottom of the economic pile possess; those who live a life that looks like and is one of poverty. The numbers are growing and the politicians who espouse the theory that 'trickle-down' works, hold on and entrench their positions. Opposition parties can and often do look like lesser-versions of the same elitists bodies that hold sway in Wellington now. The vast majority of voters do not see hope in the choices they are offered.
In the USA, the great American dream is still a lie. From time to time, someone breaks the mould and achieves power and status, but those examples are massively offset by those who have no hope as the average wage/salary of Americans slides to new lows. The possible access to health resources for a larger number of Americans is lost in the argument put up by a Republican Party that  'Obama care' is 'anti-American.' Millions of citizens continue to suffer unnecessarily as the Whitehouse remains impotent to pass legislation that will make a real difference. The Republicans and their allies represent the same forces that operate in Russia.
Look to other nations of the world and exactly the same issues occur. In China, India and the Islamic world; it is the same, varying in degree and in name. Sometimes religion is used to divide the citizens and to retain power; in other countries a military elite will hold the same gang-like hold on it's people.
Before I throw up my hands and retreat to an unreal world of 'doggie-walking' on a beach, forgetting about the the woes of the world, I guess I have to find hope and identify what is good in my own country, be it at a national level or at a local level. We must hold on to hope. There are 'counter-forces, who struggle on a daily basis to achieve more for the lager majority of our people. In New Zealand it is still possible to make a differences, despite the forces arraigned against us. I don't like joining political parties, especially if it means that I have to speak the same voice at all times. I trust that the conference in Christchurch this weekend for the Labour Party engaged in vigorous debate and will result in a fairer NZ, if they gain power, but they should always look over their shoulders and learn from past mistakes when arrogance rears its ugly, yet very human head.
Do I feel better now, that I have had my rant? Well at least I know that I can go on down to the 'bay,' enjoy the sights and company and not worry about being arrested, but I still have to return to the reality of what life is and could become if we stick our heads ion the sand too deeply. Thank God, I live in New Zealand!