The 'Bay' gives back---mushrooms for a late lunch.

It rained, the sun shone and Perdy didn't give a stuff. She had lost one of her orange balls during our morning walk--yes the Bay claimed yet another ball. Oh well, it seems that the God of the Bay felt sorry for me so she led me to a little treasure trove of fresh mushrooms. Mother nature had sent gentle rain overnight, bringing about 8 beautiful little mushrooms, right by the fence near the road---just waiting for me to stumble across them. Perdy had led me there---maybe she too felt a bit guilty, having dropped her ball---God knows where, but there they were sinning in the sun, waiting my discovery. Good things happen to those who are patient and mine was rewarded with a lunch of mushrooms cooked with the chilli nuts I had made earlier in the day. Yes the Bay provides in more ways then one: friendship, companionship[ and the occasional  wonderful surprise. 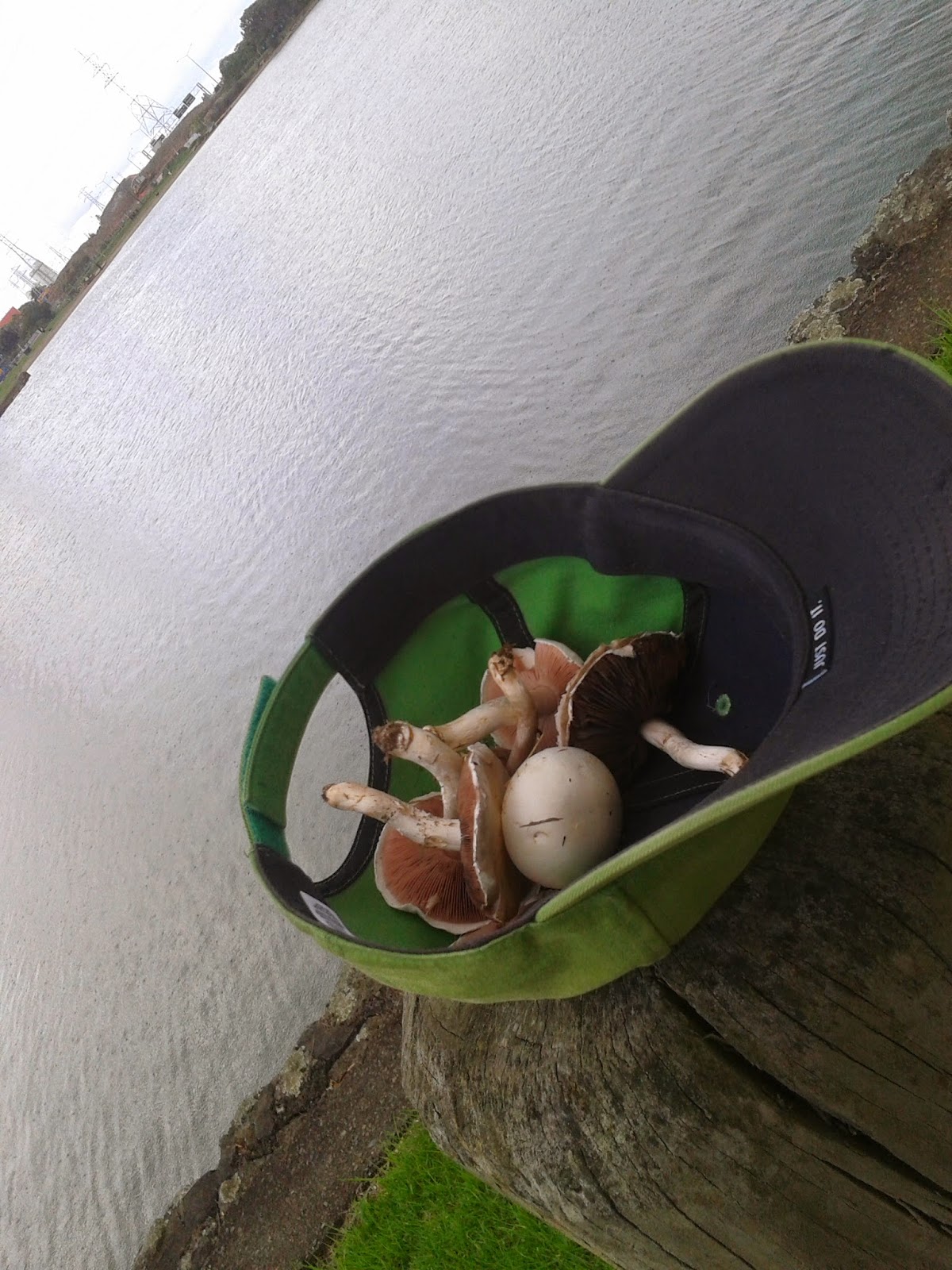 Yummy mushrooms down at the Bay.
Posted by www.authorneilcoleman.com at 7:18 PM No comments:

Roast your own chilli nuts!

I am sure many of you love to chomp away on roasted chilli nuts. Yum! When you buy them in those small packets at the local liquor store--you know when you feel like an aperitif before dinner---a glass of your favourite wine with some nuts on the side. Do that often and you will notice that the costs add up. Why not do your own nuts and save some money!
OK---off you go to the local supermarket bulk food section and purchase about half a kilo of raw peanuts--shelled of course unless you are areal glutton for punishment!
While you are their, buy some chilli flakes or look at my previous blog re drying your own red chillies and blasting them in your food processor. Man----I'm on a roll!
Right--here goes. Heat your wok up with about two tablespoons of canola or other oil. Chuck in the nuts, add some salt (garlic if you dare!) and add about a tablespoon of the chilli flakes---more if you are a 'hottie' or less if not!
Just heat them through for a few minutes and then spread them on an oven tray, lined with baking paper. Cook them in your fan oven at about 80-100C for as long as it takes to get them golden brown. Taste them---it won't kill you unless you have been overly generous re the chilli. Let them cool and pack them in jars or plastic snap bags. They make a great gift---if they last that long!
Posted by www.authorneilcoleman.com at 3:48 PM No comments:

It seems that those celebrating the important victory re Japan hunting whales in the Antarctic were way to premature in their belief that the 'hunting' had stopped.Why are we surprised that we hear today that the Japanese are simply switching to the Pacific. The so-called 'scientific' researching excuse is just that or worse---a lie. The Japanese possibly lost face when the international court ruled against their previous hunting expeditions, so here we go again and expect the same response from the international community. Japan need s to be isolated in its endeavours to continue this barbaric practice. They do not need to catch whales for food. They are a rich nations and they have many alternatives to whale meat. Indeed the young, in Japan, predominantly support the ban on hunting whales. It is time Japan took note of world opinion, because if they don't, they should expect further action from protests groups, governments, including Australia and New Zealand. They will of course try to bully those nations that dare to raise the issue again in the courts, but this time but they need to know that opposition to their illegal pursuit will grow. Shame on this proud or should I say---stubborn nation!
Posted by www.authorneilcoleman.com at 3:22 PM No comments:

Make your own chilli flakes.

if  you shop around in Auckland at the present, I am sure you will come across very cheep fresh red (or green) chilli's. The markets are best for that I think. Now, take the next step and make your own wonderful chilli flakes or powder.
I cut them length ways and placed them on a wide tray in the fan oven at  about 70C. The secret is to leave the oven door slightly open. It takes about 4 hours. Stir them a bit throughout process. Cool them and then put them into your food processor with the baled cutter. I used a very cheap machine that I brought from the Warehouse for about $20. Process them using a combination of pulse and higher speed. If you want them fine, just process longer. Make sure they are totally dry before putting them into containers. Wow---the smell is just downright wonderful. Enjoy. Now- I wonder if I can do the same for red peppers and make my version of Paprika!
Posted by www.authorneilcoleman.com at 2:22 PM No comments: