Millions of dollars worth of New Zealand lamb sitting on Chinese docks---Who stuffed up?

What a stupid situation. Picture  a huge shipment of top quality NZ lamb sitting on the docks in China and the buyers unable to lift it until the 'officials' in China grant access. One has to wonder where the problem lies. Is it stupid pedantic Chinese officials, with maybe a hint of corruption or is it New Zealand officials who have not crossed the 'T's and dotted the 'I's? Is it some plan on the part of various sector groups in China who have vested interests in NZ lamb NOT being landed in their country. Perhaps we have assumed too much about the 'Free Trade' agreement between our two countries and that in the end, China doesn't give a stuff about NZ farmers or rules. We in New Zealand after all are just a small blimp in the bottom of the South Pacific,' and China owes us nothing. Why should they? Our ties may be growing and we have all seen the 'photo-shots' of meetings between senior political figures where they state the 'new love' between China and NZ but perhaps we, should take a deeper look at where this is all going? Should we once again 'put all of our eggs' into one basket? I don't think so. I have the distinct impression that we are going back to the future. Remember when we relied on Britain and hell--- we had historic ties with that nation. We died in our thousands defending British 'interests' in three wars and what happened in the long run? They cut us lose when they joined the 'Common Market' in the 1970's, so why on earth would we expect the Chinese to show us any favours? If they can't get their officials to sort out what is a relatively easy issue or our officials lack real understanding of how this huge market operates, then let's take a hard look at the implications of this latest bureaucratic nightmare. Come-on trade officials on both sides---get your act together! MAYBE NZ NEEDS TO TREAD VERY CAREFULLY WITH BIG BROTHER CHINA!
Posted by www.authorneilcoleman.com at 10:58 PM No comments:

Waterspouts over the Manukau Harbour in Auckland.

I took Perdy for her usual afternoon walk today, knowing that we would have to hurry in order to avoid an incoming storm. Perdy jumped out of the car and waited patiently for me to put my boots on and get the ball-thrower from the back of the car. Having achieved that without her leaping up to encourage me, she was off like a shot, chasing her favourite orange ball across the sand. Two 'doggie walker' friends were returning to their cars and Perdy tired to great them by attempting to jump in their cars. It was then that I glanced towards the South Western horizon, beyond the heavy machinery that is carving out several new beaches on the waterfront.
'Holy hell!'  I yelled, to no one in particular. 'Look at that----isn't that a bloody tornado!'
Other people jumped out of their cars and watched as a sinister grey twisting mass of cloud reached for the surface of the harbour; the distance hard to measure. It was then we noticed a second much more compact deep grey thread of mischief, visibly moving towards us.
'Shit, two of them. One is definitely a waterspout1' I crowed knowledgably. That was pure assumption on my part. What the hell would I know. I did know one thing though and my thoughts were echoed by the others watching.
'Those poor people in Oklahoma.' The scene before us was as different as night and day. Still, 'Mother nature' was giving us a display that truly moves one. Within a few minutes, both spouts had retreated to their parent  clouds. I rang a few people and asked them to watch the news or listen to the radio. A short time later, Perdy and I drove out from the car park, just as a mini maelstrom assaulted us. I turned the wipers to fast and we headed around to the foreshore. By the time I pulled up to the sea-wall, the clouds had a distinctly lighter feel to them and the storm moved east over the city. On the way home I heard several reports of the two spouts. Luckily they did not make land. I once again thought of the massive destruction in Oklahoma. My thoughts went to the dead, injured and the families. We returned to the comforts of home and for me, a huge cup of coffee. Am I correct in thinking that these huge tornadoes in the USA are becoming more frequent and even in little New Zealand, we seem to be seeing more of the smaller versions. 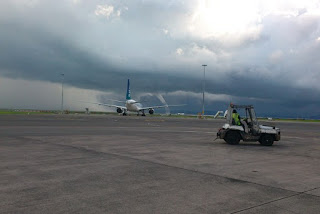 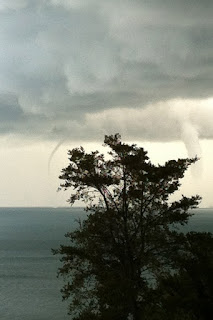 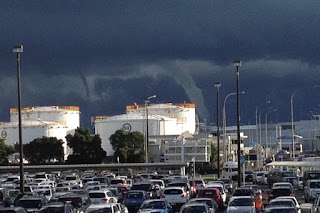 Posted by www.authorneilcoleman.com at 9:59 PM No comments:

From Russia with love!

From the time I began writing blogs I was pleasantly surprised by the number of readers I seemed to be getting from Russia. I know that initially I made jokes about that, because there is a fairly high number of Russian woman seeking New Zealand blokes for ‘relationships,’ especially in the time when Russia was going through turbulent economic times. I have no idea how that is panning out now. Of course I alluded to the fact that if I was a target for some amorous Russian ‘beauty’ then they were indeed ‘barking up the wrong tree.’ Let’s leave that for now eh, and focus on more plausible reasons for the larger and once again increasing number of Russian readers.
I now assume that there is a bit of interest on the part of my readers on the land of many time zones and for that I most willingly respond. I would love to get some feedback, especially for my very upfront and maybe a little risky outbursts about your wonderful leader, Mr Putin. I know I have been a little critical of him and liken him to one of the power hungry men from the past. His lust for power is not of course dissimilar to many politicians in numerous countries. The one thing that we can say about the USA of course is that nay President is limited to no more than two terms in office. That Mr Putin manages to ‘change the rules’ about that issue speaks volumes for processes in the modern Russia.
New Zealand and Russia and natural trading partners and I hope that we receive many more Russian visitors and that NZers travel to your huge and wonderful country. My wish is to travel from Moscow on the Trans-Siberian Railway, all the way to the Pacific. Then it’s just a pleasant sail down through the Pacific to New Zealand---- Just a few Islands and pirate-ridden seas to traverse.
Keep reading my blogs my Russian friends. You are once again catching up with Australia. Maybe I have put them off by insulting them. They are tough though, just like Kiwis!
Posted by www.authorneilcoleman.com at 7:31 PM No comments:

Perdy wants a beach holiday this year at Xmas.

Yes, I was sternly told that it is about time that we took Perdy away for a beach holiday this year. She wants a bach, somewhere on the Thames Coastline and one that welcomes Jack Russells. She said that she won't make a mess and most of the day she will be with us and out and about.  Mind you we already know that doggies are not really welcome in the main street, but we can live with that. I have tried a local agent and I hope that they get back to us so that I can pack Perdy's bags, bones and toys. I hope there are other crazy dogs there so Perdy can make some special new friends. Hopefully Sea raealty will get back to us, otherwise one of you may know where we can find a nice bach.
Posted by www.authorneilcoleman.com at 6:34 PM No comments: