My NZer(s) of The Year award goes to-----The hard-working people of NZ who struggle to keep their heads above water!

Yes, forget about the high-profile people who have been honoured in the New Year's honours list. Yes, they deserve their awards, most of them, but the people who have and continue to struggle against all odds to keep their kids in school, out of trouble, fed, clothed and give that most important of gifts; time and love---they are ones who win any award in my opinion. They are the unsung heroes, the consistent, givers and the winners in NZ. They do this despite the Government's actions or inaction on a range of fronts. They do this despite the lack of a living wage, felt most strongly in the big cities where people have to live, because that is where the majority of the jobs are. That is their responsibility you say. of course it is, but must to be so hard. Must the gap between the top 10% and the rest become ever wider, causing an accumulative effect on those  who once considered themselves middle-class? They don't complain as we would expect them too. They just get on with life, taking a cursory interest in the politics of the nation;perhaps that is their only downfall. They are simply too busy, looking after their kids, doing the 'right thing,' to have time for what they consider a waste of time. They know that they will not be listened to by our leaders, who arrogantly get on with their agenda, to sell NZ to the highest bidder, usually the mates of those at the top. Yes, the real heroes are ordinary NZers, who have put up with an uncaring Government for so long. They will seek answers in the coming year, but once again they will risk being hoodwinked by a dishonest Government, who will trot out platitudes and once again fool the people---unless they truly 'wakeup.'
Have a wonderful New Year New Zealanders, of all persuasions!
www.authorneilcoleman.com

Posted by www.authorneilcoleman.com at 8:43 PM No comments:

Papatoetoe---I took a drive and a short walk through 'nostalgia---where have all the gardens gone?

My family left the farm in Taranaki in the early 1960,s and for the most part my education at pre-tertiary level took place in that suburb. Back then our street could claim that every home had  a garden of sorts, many of them quite magnificent. I well remember my father turning our version the 'quarter acre paradise' into a pleasurable and very productive garden. There were fruit tees and many vegetables; much needed by a family of six children. The flowers were there for Mum too and we often had to help weed them. That was before the days when Dad managed to learn that if you didn't like roses, you mowed the buggers down!
I remember the sports-fields and the swimming pool too. Today I took Perdy for a walk on the Papatoetoe Recreation Grounds. No, I didn't take her on the sports-fields----we skirted the edge so that we didn't disobey the rules!
I was struck by the redevelopment of the swimming pools  but I could not see a soul swimming there. Maybe I was just too early or is it that kids don't fill their days there any more? We used to bake (not very sensible in hindsight) in the sun between swims and listen or not listen to the twit who used to yell at us over the loud speakers if we even dared to move at more than a snails pace around the pool area. Who says that we bring up kids with cotton wool surrounds now?---it had its beginnings with him!
After our walk, where we admired a few survivors of the traditional garden and back sections facing the park, we resumed our journey through the streets in my little Hyundai, I was again disappointed at the lack of care most of the sections had. It looks like most of the homes are rented or that the people no longer care about appearances and beautifying the suburb. (Mrs 'Bouquet/Bucket would have been most put out!) Mind you, Papatoetoe doesn't have that on its own now. We don't spend the hours in the garden any more. Is that because we are too busy, lazy or just don't care? Take your pick. I am surprised, given how busy many of the garden centres are when you visit in the weekend. I suspect that the effort is going into smaller patio-style gardens now but I wish there could be a revival re gardens per-say.
Another change in Papatoetoe now is the cosmopolitan nature of the suburb. The shops had been going through a it of a down-turn over the last few decades but the advent of a large Indian population has brought back some colour and vitality to the shops, especially in Hunter's Corner. I was assailed by colourful clothing shops. I like the myriad of colours in Indian styles. Bring it on, I say!
Oh well, nothing stays the same. Maybe Papatoetoe will continue to evolve, much like the rest of Auckland. I am not moaning---I embrace the differences. I still love the big older well-built houses of that suburb from my youth.
www.authorneilcoleman.com
Posted by www.authorneilcoleman.com at 2:44 PM No comments:

I think it must be 'holiday time,' around the world because many countries are reading my blogs---now read the books!

It is so nice to see so many countries a reading my blogs today: Mexico, Spain, Germany, China and all the old favourites. Help me spread the word about my self-published books. Go to my site   www.authorneilcoleman.com  and download ROSKILL on Kindle or your reading App. Just follow the links from the site. Please let me know if you have done so by emailing me from the website using 'messages'. 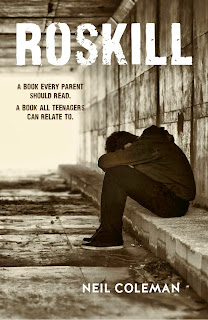 Posted by www.authorneilcoleman.com at 12:47 AM No comments: