Humans are easy to train

I was having a cup of gravy-beef stew the other day, eating of course from an old Crown Lynn bowl that I insist is the only vessel from which I eat. My friend Finn was visiting and he didn’t seem to mind the plastic one, although I did see him giving his owner/servants some sidelong glances. I suspect there will be words spoken when they get home later--- things are going to change.
We had just got back from the Onehunga Dog Walkers Bay. I get so annoyed that it isn’t officially named as such on the maps, but once again, we are working on that. I mentioned it to the local Member of Parliament the other day, when he fortuitously dropped in to see ‘he who thinks he is master.’
I must say that Phil (we are on first names basis of course) is doing a good job. I know he didn’t win the last election, but he does look so much more relaxed. He has a dog just like me, just a bit older. Hopefully I can go and visit him one day soon. I am sure we can help with policies, even if Phil is the Foreign Affairs spokesman. Perhaps we can arrange visits to other countries so that there is more of an alignment with Commonwealth policies on Doggie rights.
It was so easy to get Neil to take me for my morning sojourn down at the park. I like that word, s-o-j-o-u-r-n---- so sophisticated, but my methodology is much more down to earth. I just act a little crazy and Neil knows what’s coming. It’s his choice--- take me down to the bay or say goodbye to any plans for a decor update in your lounge. Mind you, once he gets there and starts gabbing away to his friends, well--- time just flies. I have to remind him every so often that standing talking doesn’t sit well with me. I just jump on some lady wearing something fashionable and that is enough to move the group on. Sometimes Finn, the Golden Retriever crossed with Gods knows what, has a few tricks too. He loves to run really fast, missing the humans by centromeres---a little reminder. I of course stand by innocently--- they mistake my expression for cuteness, when what I am really portraying to the other dogs is one big laugh---- If the humans only knew.
Things got a bit chaotic today. There were lots of walkers and Neil nearly hit some of them on the head, when he threw the ball with that littler thrower he likes to use. I don’t think he can throw the ball far without it. I love it when the other dogs try to chase me and catch up. I know some of them can run faster, but I gig and jive and they run past me. I saw something on TV on the History Channel the other day. It showed a HARRIER Jet stopping in mind air and the other jet sweeping past, thereby exposing itself to the wrath of the harrier. I’m something like that—a little Jack Russell harrier jet dog. Some of the other smaller dogs try it on, but I pretend to bite them and they veer off, so it’s not only humans that I control--- dogs beware too. You make a huge error of judgment when you take me on. Naturally I have a few big friends, so that if any nasty dog shows bad breading, I have an ally or two.
In the past when I was little (Don’t say it--- I’m still little) Neil could never get me to come to him, for the return ride home. I trained him so that he needs to have my favourite treats, to get me to come to him. If I don’t like them, well he has to wait until I am good and ready. I let him think he has me ‘trained now.’ I go and sit with my flashing eyes, full of love, looking up at him. I put on that shivering thing he thinks is so cute and he kneels down, near enough for me to lick his face. I let him lead me to the car, whereupon I jump in and receive my reward.
Oh—life can be so simple. Neil stays home with me most of the time in weekends and holidays. I got him so well trained that he feels guilty if he leaves me alone for too long. I think he would take me to work if he could, but that may be pushing it. Anyway--- even I need to rest sometimes. That is when I dream about what I can do next to amuse myself and train him more. 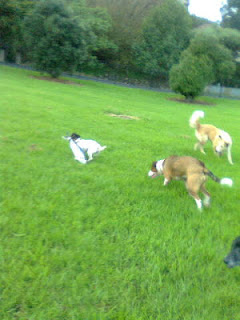 I can even get away when I have caught a fish!
Posted by www.authorneilcoleman.com at 4:56 PM 1 comment:

When everyone's on holiday--it's not a holiday!

Perhaps I am being a sanctimonious twit (now that should get you going), bit I am happily ensconced in my sunny lounge, with ‘Miranda’ playing in the background, quite unusual for a male, I am multitasking---that is writing this blog at the same time.
I wrote a blog a few weeks ago asking, ‘Who had stolen New Zealand’s summer?’ Well, it appears that who it was, has decided to stop the suffering and given us some sort of summer back, even if it is only for a few weeks, before plunging into a late autumn and winter. So far, the Easter break has been a succession of glorious days, with temperatures reaching into the 20’sC and blue skies to complete the perfection.
Joining New Zealand’s version of a British Bank Holiday Weekend is not my cup of tea. No—I do not fancy, sitting in a long line of cars, trucks, caravans and near ‘road rage,’ occupied vehicles in general. OK, that means one would be delayed about an hour, then the traffic flows normally. Still---- the very thought is enough to keep me nearer home at these times. The benefit is that Auckland’s traffic is bearable. The only logjams are in and around shopping malls when they open for their Easter sales. Avoid the malls, and trips across Auckland to beaches parks or friends are actually quite pleasant. During the Christmas Holidays this peaceful time extends to several weeks--- take the hint, would-be tourists and come at those times.
Mind you, I did choose to travel to Hamilton yesterday, but that was in the middle of the Easter break, a day before the hordes return home. Now I am looking at Perdy, twisting her head in that endearing way, trying to understand my ramblings. I just asked her what she would like to do today. I mention the word ‘beach’ and her tail wags. If you haven’t figured out who Perdy is by now, then I shall leave you wondering who I keep for company--- should raise a few questions eh.
Posted by www.authorneilcoleman.com at 2:33 PM No comments:

OK-- I know---the title to the book I formerly called The River Always Flows, sucks big time. This is where you come in. Read the first chapter and give me some ideas. No--- or maybe yes--- Perhaps I could call it 'Dead Cat Pie For Lunch.'  I was amazed at the hits that little blog got (but not clicked on in the adsence). Have a read of the first chapter and get back to me. Those of you reading my blogs via Facebook and Twitter--- please do the same.


A word about the Adds. It seems that Google has put some on about online dating and meeting Russian Women. (Hell--- if you are gonna do that--- stick on the complete spectrum).  That may explain why I have so many hits from Russia. Sorry dears,  I'm not in the market. Mind you, I may also be very wrong and soon some of my friends in Mother Russia will repsond and enter into a dialogue, just like my increadibly stimulating new USA friends. I am not getting away with any ioncorrect statements with them. God---- they are such a refreshing group--- the experience has renewed my faith in humanity. They can even read my terrible typing. I have self-diagnised my condition. It is 'Technological Dyslexia'.
Posted by www.authorneilcoleman.com at 1:41 PM No comments: