For those of you reading 'The River Always Flows'---

I am waiting for some direction from you, otherwise the plot is going ot turn rather nasty-- is that what you want?
I am about to write Chapter 4.
Posted by www.authorneilcoleman.com at 10:31 PM No comments:

A good cup of coffee-- what can I say?

If I had to choose between giving up wine or coffee, you may think that the choice would be easy. Then you would be wrong. I would struggle for a moment and then some, but I think coffee would eventually win. Luckily, I am not in that terrible situation. I have noticed of late however that I seem to like no more than two standard measures of a decent red, usually from NZ or Australia, although I did just take delivery of a mixed case of Italian and Spanish Reds. California also beacons and I am sure my America friends are going to tell me on Facebook, which ones I should consider.
Now back to coffee. For the last five or so years I have been making my own coffee at home. I started with a reasonably cheap machine and it made tolerable Flat whites and cappuccinos. Now I know I have said this before so forgive me for repeating myself. Flat Whites are a NZ/Aussie invention and now they are sought after in London as Kiwi and Aussie baristas make their presence felt, both amongst the natives and expats. If Aussies are reading this they will throw their hands up in horror as they expect me to launch into yet another discussion on how NZ always claims that the Aussies stole everything from famous racing horses to actors and pop groups. I shall save that for a time when I am feeling particularly reflective on Aussie Kiwi spiritual connections.
I love my coffee hit and I eventually invested in an Italian coffee machine, one that has resisted design changes for a good many years and one that is easily fixed and serviced. That can’t be said for the models that sell for next to nothing, make good coffee for a year or two and are then thrown away, because no one will touch them. It is better to invest in a good machine that will last for many years. Mine has been going for at least five years and I expect it to keep on going.
Combine a good machine with a quality coffee grinder and you have beginnings of a café away from a café--- at home. There is something special about the process of grinding fresh beans (no more than a week old--- get the beans from a ‘reputable supplier). Don’t use one of those disgusting little cheap machines that cut the beans. You will lose so much flavour. 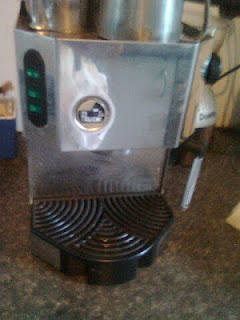 I make sure the machine is well primed and heated. It only takes a minute or too. If you are in a hurry, then use instant coffee! I warm the cups and then express the coffee. I love to watch the velvety mixture cascading from the nozzles, like mouse tails, filling the kitchen with an aroma that only a real coffee drinker can relate to.
Sometimes I get it wrong. There is only one thing to do--- chuck it out and start again. As I said before--- don’t hurry the process. If it means getting up a few minutes earlier in the morning, it is worth it.
Now for the milk; I use a lower fat variety. We are blessed with choice in NZ, so I will just say—make up your own mind. Everyone has their favourite. I hold the jug at an angle until the volume has increased to ‘perfect’, and then plunge deeper into the silky mix, heating it to a hot touch on the bottom of the stainless steel jug.
Pour the mixture into the waiting cup, holding the slightly thicker part for the top. It will make its own pattern. I have often been disappointed by pretty designs that cafes insist on swerving, not backed up with a quality taste. What can be better than relaxing at home with your own lovingly made coffee? 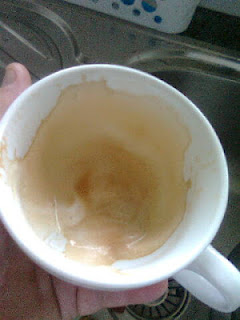 Posted by www.authorneilcoleman.com at 9:37 PM No comments:

LOL I just checked my earnings-----

I see that 1  yes one cent has been credited to my account. God only knows what that's for-- maybe someone 'thought of me.'
Posted by www.authorneilcoleman.com at 5:29 PM No comments:


I love having you all reading my blogs. Now make some commnets and please click on the adverts so that I can put yet another huge book on. It is called 'Sons of Orpheus,' an historical novel from the 1860's.
Posted by www.authorneilcoleman.com at 4:57 PM No comments:

I am most pleased with the numbers of readers. They keep having to change the numbers on the side of the graph-- I'm sure one of you who reads this on Facebook can tell me what the correct term is.
Now, I need clicks on the adverts. Very slow becuase we all have a natural inclination to ignore adverts, but that is potentiallly what will help me get my books out there so---- you know what to do.
MMMM what's the weather like tomorrow? That will determine wether I take Perdy to work. The neighbours have all been nice to her after all the fuss. She of course couln't give a rat's ass (see I am spelling for my dear USA friends!
Posted by www.authorneilcoleman.com at 4:36 PM No comments:

‘Hello, ---- anyone home?’
Moana was having an early morning coffee and watching TV in the lounge. She enjoyed these times to herself. The previous night had been stressful and her sleep had been punctuated by disturbing dreams, leaving her a little jaded. She remembered that she had opened the back door after making her coffee. She was a little wary as to who would be calling at seven in the morning.  A lady was standing on the back porch with a plate of freshly baked scones.
‘I’m Kathleen, your neighbour,’ she said, indicating the house to the left.
‘Come in Kathleen. I’m Moana----sorry about my appearance,’ Moana replied. She was still in her dressing gown and was about to get some breakfast for the sleeping family. ‘I’ll put the kettle on and we can have a chat. No doubt you heard the kafuffle here last night---.not a very good neighbourly act for our first night eh?’
‘Well I should have come over last night, but I was at my sisters till late,’ Kathleen said as she sat at the kitchen table.
‘I have to say that we got quite a fright last night, especially with the threats those guys made as they were taken away,’ Moana said.
The kettle bubbled away as Moana put out some of the rinsed cups from the night before.
‘Mmmm----we don’t even have the fridge on yet, so there’s no milk,’ Moana said apologetically.
‘That’s OK--- I don’t take it anyway, but I’ll nick across and get you some for the family’s breakfast,’ Kathleen replied and disappeared for a few moments out the door and along the side path.
When Kathleen returned, Moana had the tea pot ready and waiting, along with some sugar she had found in one of the boxes stacked around the wall.
‘I’ll be glad when this lot’s packed away,’ Moana said. 'Hopefully another day will see it all done.
‘Well I will just have to stay and help you after we’ve had our cuppa and fed your family,’ Kathleen offered.
‘I’m beginning to change my mind about last night already,’ Moana replied laughing.
By the time the rest of the family wandered into the kitchen, looking like they had partied all night, Moana and Kathleen had the kitchen organized and another pot of tea on the table. The scones were re heated and Kathleen had returned to her house for more jam.
‘This is yummy, Mum,’ James said as he munched away on his third scone.
The subject of the broken window and attack came up.
‘There are always young ones out there,’ Kathleen said angrily. ‘You’d be surprised at how young some of them are too. I’d like to deal to their bloody parents’
‘What gets me is that nothing really happens to change things for those families,’ John added.      ‘The same thing happens in Christchurch too.’
‘Well you two just make sure you keep away from them,’ Moana said to her two children.    ‘We’re going shopping later, so we can stock up for the kitchen. If you want, you can come too. We’re going to St Luke’s.’
‘OK, I’ll drop you off there and then I can check in with my new boss,’ John suggested. ‘I don’t start officially until next week. Just text me when you are ready for me to pick you up. Take your time----why don’t you go to the movies first? Then I will have plenty of time with the boss.’
‘Well,----sounds like your day’s organized, so I’ll be off. Don’t be strangers now,’ Kathleen said as she left.
‘Right,----- you two-----be ready in an hour. I’m having the first shower,’ John said, pre-empting James’s usual attempt to commandeer the bathroom.

Posted by www.authorneilcoleman.com at 4:26 PM No comments:

You are most welcome Saudi-- I think I know who that is and it will be great knowing you are reading my blogs
Posted by www.authorneilcoleman.com at 4:08 PM No comments: