That is how we describe a spring day in Auckland. On any day we can have 'changeable weather in this wonderful city. It is predicted that we will get to about 16C today and on my sheltered deck it may get to 19C. It's a good day to test the efficacy of my new Solar Flair solar oven. Let's be fair here; the manufacturers make no claim that I am going to be able to cook anything useful on such a day, but test it I will!
I set it up on the deck, with the thermometer inside and a cup of water on the rack. Within ten minutes of the set up the thermo mentor read 70c and then the sun started dancing in and out of the clouds. Still, I was quite impressed. That temperature would be enough to dry fruit or tomatoes. To stop it rising I assume I would only need to reposition the oven, slightly away from the direct sun. As a precaution I need to lock up my crazy Jack Russell, because she is showing far more interest than I would want!

4)  OK, When I cam back an hour later the clouds had slapped the sun away and the temperature had dipped to 50C. IN my view that is pushing it for cooking anything other than a long slow session with drying fruit.
5) The sun came out but was still patchy, raising the temperature into the 60C plus range.

I will not attempt cooking chicken unless I can consistently have temperatures above 100C. I suspect that may not be possible at this time of the year, but I shall keep testing. Maybe the chicken Moroccan curry will have to go in the slow cooker tomorrow! I will keep experimenting.

So while you are all waiting to see if this is going to work, go download ROSKILL on your Kindle or Tablet. Just go to my website to click on the Kindle version of ROSKILL. 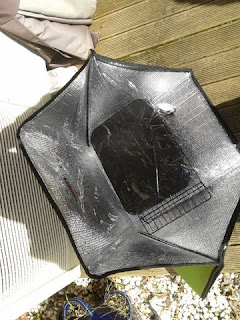 So far on crappy days I have managed to get it to 85C--enough to dry fruit but not enough for meat! 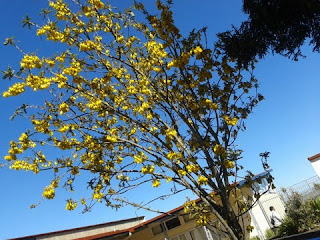 Spring day in Auckland with the beautiful flowering Kowai.
Posted by www.authorneilcoleman.com at 4:38 PM No comments:

USA and Australia---What have they got in common?

Yes, I know, lots of you will say---well everything, but Aussie is America's bitch,' doing what the big slapper says.'  Why?---Because Australia sees itself as some sort of Great Power' in the Southern Ocean, emulating what 'big brother' does elsewhere in the world. It also takes this attitude to extremes when it comes to performance on the sporting field. When Aussie is doing well, it is wall-to-wall TV coverage. The same can be said for the USA.
Take for example, the media coverage of the America's Cup finals in SF. When Oracle was preforming to plan, the coverage was right up there, with constant news chatter and glorification of the 'boat and sailors.' Then came the losses and New Zealand edged towards the magic number of victories needed to bring the Cup back to Auckland. What happened? Many new channels went dead, as the big eye turned towards other more important news issues, like Syria, the nation that most Americans would have a problem finding on the map! I did see a few brief mentions of the Cup when Oracle actually won a race against Team NZ, but after yesterdays drubbing by the Kiwis---that was it!
Aussie does something similar when any NZ team takes it to them. Am I accurate in my summation? Mostly; just do a little survey for yourself. Does anyone care? Of course not! It goes with the territory. Do we love the afore mentioned countries any less? Of course not! We are used to such posturing  and have learnt to deal with it for many years. After all; 'friends' always have 'tidal- like' relationships; the ebbing and flowing is a natural event, indeed one that is necessary in order to keep the 'natural flow.'
We only need to look at our collective histories where the behaviours of other countries has thrown the three of us together. Is that from a sense of 'caring' or is it more to do with the interests of the two big daddies that have so much influence on our lives in tiny NZ?
In the next few days, if everything goes to plan, Team NZ is going to lift the Cup from SF and bring it home. Maybe the  big eye of the USA media will focus on this insignificant country in the South West Pacific for long enough to inform the American public where we are. Then they will line up to buy our farms----Ooops, that sector of the USA is already doing that! Damn!