Today, a funny thing happened on the way to the forum. Really?

OK, OK, I am just trying to grab your attention. What I have to tell you is perhaps just a bit of light relief from the wars, corruption and bullshit I have been listening to in the news, from all around the world. If is isn't self-destructive suicide bombers or dishonest politicians, failed states and God knows what else at this 'festive'time' of the year, it is yet more bad news. So--I made something happen for me. AND---I warn you, it is totally frivolous, so----- STOP reading right now!
I like Trade Me, an on-line facility in New Zealand, sort of like a smaller version of E bay. I use it to sell a few items and to increase the usually less than useful items that inevitably end up---yes you guessed it---in the garage, or shed in my case. Sometimes I actually use the items I win. Yes, I admit, I get carried away. But, more often than not, I bid on certain items and usually get blasted out by clever 'dealers,' who I suspect sit with their finger on the button, to win deals that they then sell on to others. I AM NOT A DEALER, so I am not so good at doing that.
This time, I spied some cups that I really liked and I made a decision that I would win them and use them every day. They were about 30 years old and a certain appeal that goes well with serving coffee to friends, family and of course---me! Before you ask---yes, they were Crown Lynn.
I put my bid in, trying to find the tip point, or reserve price. After upping the bid to over $30, I succeeded in meeting the reserve price. Then, the war began. A dealer had his/her eyes on the 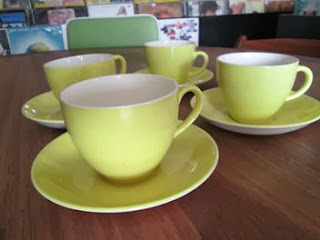 same items and when I looked at their profile I noted that they had many of the same things on their page, at much dearer prices. So I made a decision to meet them head-on. after all, they were trying to buy them and sell them for a profit. I was going to love them and use them---no, no the dealers, the cups! So, I did not have the profit motive driving my actions, merely that of 'wanting something a it too much.'
Over the next few days I checked my 'bidding war' and usually they had outbid me, so I waited until a few hours before closing time and put on an 'auto-bid' a few dollars above the last on-lone bid. I then waited with my fingers poised (yes, that is how people win!) and hoped like hell that the bid would not auto-extend. It seemed that the dealer must have been at the beach or otherwise engaged, or perhaps had decided that there was not enough 'margin' in the deal for him going beyond my bid. I WON! Do I feel good---hell yes! Was my story of any value to humanity---hell no! So my guest can sup their tea and coffee from cups with a 'retro feel.' Will it taste any better?
www.authorneilcoleman.com
Posted by www.authorneilcoleman.com at 6:52 PM No comments:

I am right behind you, Pussy Riot---but is your solution to the Putin you dislike all that much better?

Pussy Riot deserve credit and respect for the way they are prepared to put themselves on the line re their opposition to their President. I am behind them, but I just heard that they wish to put the man who Putin had put behind bars for ten years, in his place in the Kremlin. I really do wonder at the 'rightness ' of their decision. I also wonder if 'he' is all that much better. He is yet another (or was)  person who gained a huge amount of power after the fall of the old Soviet Union. That he attained so much wealth in an above the board, honest manner is questionable to say the least. Why put him in the same position as Putin? Is this not 'same as, same as,' politics? One does wonder at the thinking behind their position. I had thought Pussy Riot to be astute thinkers. Perhaps they have been carried away in the moment and maybe they have links to the person they wish to replace Putin. Oh well, time will tell. One thing I do not believe is that 'he' has had some sort of 'seeing-the-light-moment, biblical in nature, and now is really a genuine and wonderful person, capable of delivering freedom of thought and actions, to the people of Russia, in a 'fair' and equitable manner.  Think carefully, Pussy Riot!
www.authorneilcoleman.com
Posted by www.authorneilcoleman.com at 6:33 PM No comments:

Perdy checked out what the 'rich and famous' are doing in Auckland.She wasn't that impressed.

There is a rather strange looking boat (I know, it's probably called a yacht--but 'they' have sails as far as I am concerned!) in the Auckland marina at the moment. It hails from Russia, the land of the new billionaires and is here for some sort of makeover. We stumbled upon it down at the new Winyard Quarter, a new addition to the Auckland waterfront. Don't worry Wellington; it has nothing on the magnificent version you have---yet) Each time we visit the area it seems to have had another addition, almost appearing overnight. I hear there is even a plan to construct a 300 metre long canal. Won't that be 'nice.'
We took Perdy and she did not like the huge yacht. Maybe she could detect sounds that are way beyond the human ear or she just didn't feel welcome. After all, she is a British dog by design!  Don't get me wrong----I have nothing against these luxury yachts coming into our harbours. They provide much needed work for NZers and the services they require help local businesses.
Needless to say, we were not invited on board, to be served Russian Caviare and champaign. I guess it is not within the scope of mere mortals like myself to aspire to such giddy heights. Maybe the owner will read this and call for me to visit this 'other side' of life. Yeah right! Oh well Perdy; time to go home for a nice cup of coffee and some Xmas goodies.
www.authorneilcoleman.com 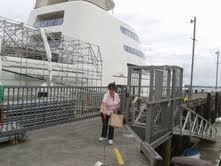 Posted by www.authorneilcoleman.com at 2:25 PM No comments:

Pussy Riot are incredibly brave to take on Putin!

Only hours after being released from their cruel prison term, Pussy Riot have shown that they are prepared to risk everything in order to take a stand against Putin. It seems that they are not just a group of young ;people, seeking publicity for themselves and their 'musical careers.' Indeed Pussy Riot are now defunct as a group, transferring their energies to the fight for a better and more transparent political system. There can be no doubt that they are going to cause discomfort to Putin and his cynical treatment of those who oppose him. Now that 'world media' is strongly focussed on the actions of the Pussy Riot women, Putin is going to find ways to silence them. I am pretty sure that he will do all in his power to keep them away from the site of the upcoming Winter Olympics because that must be a 'target' for them.
Putin of course does not inhabit that space where leaders will do almost anything in order to maintain their hold on power, but that he tries to portray himself as some sort of Macho Russian Father, with only the best interests of his country at heart simply falls on very barren ground for those of us trying to understand what is going on in modern Russia.
Any real opposition to him, always seems to be sidelined or disappear when the calls for change become uncomfortable for him. He is simply following in the footsteps of countless Russian leaders from the past by acting in the way he does. Who will stand up to him? Well, it will need to be people and groups who are prepared to pay the maximum price---the loss of their freedom and a curtailment of the pathways we take for granted in those nations that actually have right to oppose in a reasonable manner. We must take the example of our Russian friends as a reminder that that right is one that must be defended. Go well, Pussy Riot. The world is watching! I wouldn't have a clue what your music sounded like, but the messages you convey are coming across loud and strong.
www.authorneilcoleman.com
Posted by www.authorneilcoleman.com at 11:35 AM No comments: