Life is about choice. One can begin the day, walking the dog down at the bay where no one else is present or chose to brave the mayhem of a Boxing Day Sale at a popular clothing retail outlet. I am not one who likes to have choices imposed, merely by the fact that 'others' are doing the later. I also had a plan that I was going to take a modest amount of money to the 'sales' and buy clothing that I could not normal afford. I felt that I should reward myself for the year's journey re the Bariatric Surgery I undertook in April. Now that I am down in weight by 44 kilos (well over 34% of my former body weight) I convinced myself that I deserved a reward.
To keep a balance and after listening to the early morning radio reports of the traffic mayhem near the big malls I decided to take the walk first then attempt to 'assail the walls' of the clothing outlet stores in Onehunga.
I dropped Perdy off at home after our peaceful walk and headed toward the stores. I sensibly parked the car well away, avoiding any possible 'car park anger,' where some people morph into impossible creatures, completely devoid of any humane tendencies. They must 'win' at all costs---what?---I am not sure. The 100 metres closer to the mall they parked must somehow rank extremely highly with them. I swear I saw some of them still searching with stress-ridden demeanours, for that elusive car park, while I strolled quietly past them, having parked a simple 5 minute walk from the object of my journey.
I entered the 'halls of clothing paradise' and was immediately struck by the seething mass of people. I have shopped in the Great Jakarta Sale and various other venues, but I am sure that the zombies I encountered on this day surpassed the worst I have ever seen.
I headed towards some of the stores that I had planned to visit; bugger---I could hardly enter the doors and when I did, it seemed that something nasty takes over in peoples behaviours. They grab, just as I was about to take a quiet inspection of a clothing item. My mistake was that the table I searched, had a notice saying, 'nothing over ten dollars.' OK I got the gameness; if I wanted even a modicum of sanity, I was going to have to go 'a little upmarket.' Sorry Hallensteins, you just didn't do it for me today. Hey, I love your clothing, but I shall get it on-line. My nerves are just not up to it. I do not want to compete with 'snatchers, pushers, harassed shop assistants or the plain bloody-minded manners of my fellow shoppers. I headed to other sections of the big mall.
I came upon two 'nice' shops that were obviously more expensive; namely Barkers and Bing Harris and Co. It turned out to be a most sensible choice. If I sound like a snob--hell, I have earned that privilege, just for one day!
Sure, I did not buy as many items but it was most definitely a case of that wonderful adage I so often talk about re my writing---'less is more.' I brought quality rather than quantity. Was that not the purpose of the visit? As soon as I had purchased my 9 items (for less than the budget) I left the premises, running into another 'dog walker,' who was about to enter the fray. She steeled herself and waved goodbye, hopefully to be seen down at the park---if she survives!
I took the picture and deliberately distorted it (OK I just shot it and it turned out crap, so I can claim that I was protecting the images of the crazy ones who also sought bargains)
God, it is so good to be home again and rewarding myself for a light lunch and later, a walk with Perdy. 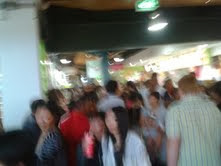 A distorted view of the shoppers at the Boxing Day Sales or is that what they actually saw as they struggled win a bargain!
Posted by www.authorneilcoleman.com at 3:03 PM No comments: