Australia--- what is it about you and politics?!

I have just finished watching the Governor General swearing in the new Australian PM and Cabinet. I cannot help ask a few poignant questions. How can the political polls turn around so quickly; to the point that the Labor Party is possibly back in the race for the upcoming elections. If they pull this off, it will be one of the biggest turn-arounds in Australia's history.
A week ago, Julia Gillard and the Labor Party were basically stuffed; dead ducks in the water, waiting to be swept aside by a resurgent Tony Abbot.
Then, along came Kevin at the behest of his former colleagues and all bets are off. Kevin is back and Julia is gone. What is it about the relationship between the electorate and this feisty Lady? Was she that hated by the bulk of Australians? Did she turn off voters to the extent that few would admit to voting for her? Does her demise say something about Australians and their attitudes to women, especially those in a position of power?
Perhaps the 'toughness' of the Australian psyche came back to haunt her. The rigorous Australian climate and the history of the 'lucky country' may have come together with some other aspects of Australian culture to make it nigh on impossible for Australians to give a female a fair go? No--- then was it the fact that she knifed Kevin Rudd and it is a matter of 'what goes around comes around?' Maybe Australians never forgave the manner in which Julia came to power. I merely pose the questions. I don't say with any certainty what has led to todays political turn-around. I can just say that I am perplexed.
Perhaps we will see the political knives out in the NZ Labour Party soon. I hope not, because our David Shearer deserves a chance. Oh well, Kevin will bring his own brand of action to the Australian scene and Tony Abott will know he is in for a bloody good fight, come election time!
www.authorneilcoleman.com
Posted by www.authorneilcoleman.com at 10:00 PM No comments:

I came, I saw, I conquered. Just a little achievement and one of many to come.

I conquered Mt Everest like any good Kiwi should aspire to. OK, I know that is a bit too much to claim as the mountain was a mere hill, but for a former fat boy, it was quite an achievement. Not only did I accompany my crazy Jack Russell to the summit, along with about a dozen other dogs and their bosses (well they think they are!) I did it without actually being aware of the steady climb because as usual I was motor-mouthing the entire journey---surprize!
It was a beautiful day and on reaching the top, the view was magnificent. To think that about 4 months ago, I would have had to stop about ten times; that’s about once every 15 metres, then I am happy with my little achievement. I know the picture isn’t that good, and if you can’t see it, go to my blog through my website.
www.authorneilcoleman.com 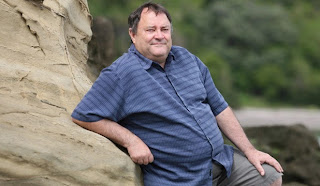 The pitures big, beacause it needed to be! The old me!
Posted by www.authorneilcoleman.com at 1:02 PM No comments:

A nation can feel proud when both its womens team and the men won gold in  sport near toits heart. New Zealand are double World Cup Sevens champions now, a title to go along with the win in 2011 that  put the men at the pinacle for the 15 aside game.
One can not feel anything other than pride to see the women quickly followed by the men performing their winning haka. It is not often that we achieve such heights on the world stage.
The only thing that I can't understand is why the Russian hosts, who did a wonderful organnizational exercise chose to use such a huge stadium. For the whole tournament, it was almost empty and even the finals looked like a small town sports-meet. The tournamant lacked that special feeling that should go along with an event of this kind. I wonder why Russia won the right to host the event and one can only assume that politics reared its ugly head in making this decission.
I know that moving the event around is meant to 'grow' the sport but anyone watching the games on TV would harldly be entranced at the lack of atmosphere. Think again, 'officials,' when you make those decisisons about where to host the upcoming World Cups! The sporting achievments delivered, especially if you are a Kiwi.
www.authorneilcoleman.com
Posted by www.authorneilcoleman.com at 12:46 PM No comments: