I know, It's sartorial elegance, but it does the trick. Yeah the rugs are from the Warehouse and not exactly Kashmir, but who cares. It's pissing down outside and there's a warning about more wind and rain. Hell, I'm not going outside. If I need a wee-wee, I shall just have to hold it until morning when I can go for a walk and use the street. Just in case you think this is Neil; think again. It's Perdy.  Yum, those chicken necks were nice for dinner. Now----what's next?  Oh hell, I'm not getting up. 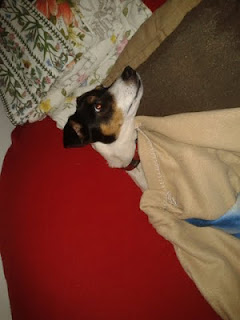 Will you please turn the damn light off and while you're at it, turn the TV down too!
Neil will have to bring them to me!
Posted by www.authorneilcoleman.com at 11:37 PM No comments:

I wish we could give Gilmore 90 days to vacate his position in Parliament!

It seems that bully-boy Gilmore has a 'unique ability' for asking people he comes into contact with about their knowledge of who he is and what he does. The answer should always be easy for those asked, because all they need to say is--'stuff all, mate,' judging by your past and recent history. But that answer is not likely because most people 'don't know' who he is and don't care. It is not the NZ way to use one's position in the manner he does. He is a bully and needs to look for another occupation, before the National Party places him so low on the 'List' that he will need to see his party achieving about 70% of the vote at the next election. I am sure that Mr Key is hoping that Gilmore will just resign, but that too is not likely. Gilmore needs to have his snout in the trough in order for him to  throw his inflated sense of importance around the country. I suppose as long as people are not hurt or put out too much, at least he provides us with some entertainment. With the publicity he is achieving, those he targets will have the support of the nation. Hey Aaron, Mrs Brown says its time to feck off!
Posted by www.authorneilcoleman.com at 2:36 PM No comments: