Don't be fooled by the picture---she is only pretending to be asleep. Even after an hours walk this morning, quickly followed by a manic run at Onehunga Bay and then an hour and a half with her friends at the same place this afternoon, she still would jump in the car for another bout. She ran, played, chased her ball and tackled the much bigger dogs 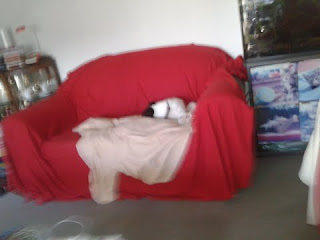 in the car at the end of her THIRD outing she still argued about getting in the car. It looks like she is 'resting' now, but experience has taught me that the slightest sound will have her charging outside to check on her domain. The good thing about this of course is that I have had plenty of exercise today and that she will sleep (with an eye open) for about 8 hours or more tonight. I wish there was a way of manipulating dome of her genes for me, but then again, people who know me would dread that prospect!
Posted by www.authorneilcoleman.com at 8:48 PM No comments: