A unique solution to having a china cabinet that is overflowing!

I shall let the picture speak for itself. When the china cabinet is full of 'stuff' then you have to look for solutions that work. Yes, the items in the picture, consisting of English china, are for sale or will be very soon. They will be on Trade Me. If you cant see the pictures on Twitter and Face Book, then go to my site and follow the blog; that is after you have downloaded ROSKILL  of course.
www.authorneilcoleman.com 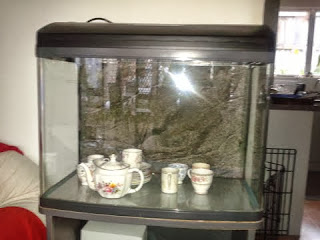 Its all for sale---fish tank and the English China.
Posted by www.authorneilcoleman.com at 11:16 PM No comments:

Vote!---Don't bitch about how things are bad.

Yes, it's local body election time and you are confronted with a plethora of candidates, all promising to either spend all of your money or save you heaps. In that since, you really do have a choice. For those candidates promising to keep the rates down, you can safely assume that there will be little in the way of 'infrastructure' spending, meaning that services will suffer and you will be moaning about this and that not being done, leaving it all for another election cycle for some other group to play catch up, so before you tick the box for so-called austerity candidates, take a deep breath. You are gonna pay one way or the other; it's just a question of when. Then, we have candidates who promise 'free this, and free that.' That too comes at a cost, the difference being that, maybe they have a point, especially when it comes to getting people out of their cars and freeing up cash for projects other than expensive motorways and the destruction they cause to local communities as they rip through the heart of our suburbs.
Then there is the consideration about who the candidates align themselves too, in terms of political parties or ideology. There are of course those 'independent' candidates who claim no political allegiance. The only way to know who they and what they purport to stand for is to meet them, go to meetings  (its getting a bit late for that) to read about them or to go online. There are other ways too. If you favour a certain political party then you can sometimes assume that the billboards with lots of red on them generally favour Labour and those with blue, National. Of coursed that is a pretty rude measuring device, so if you really care, you will have to make the effort to find out more.
I cringe when I hear how some people make their choices. They vote for those at the top of the list, they choose better looking ones, they avoid names that they perceive to being too different (read in race factors!) or they vote for people that others tell them to vote for. Is that any different from what people do for General elections? Democracy comes with a price. it is only as good as the manner in which we vote and hold our candidates accountable and the knowledge used to make decisions is only as good as the information people use to make their choices. That doesn't say much for the process, does it. Oh well; go and make your choices and don't bitch about how things are stuffed, if you don't' get off your butt and do it. Have I done it? Of course I have---TODAY.
www.authorneilcoleman.com
Posted by www.authorneilcoleman.com at 3:39 PM No comments: