Yeah, I know--I ain't 'model' material, but I am feeling one hell of a lot full of life now---six months post bariatric surgery. The only problem is that I have to change my wardrobe, yet again! Bugger! 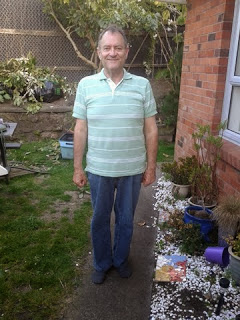 Mr Key's dumb arse statement! 'I wrote it down and put it in the top drawer.'

Really Mr Key? You have a whole batch of notes you have written about the dirt people have given you about Labour MPs? What a ridiculous 'come back and kick me in the butt,' statement. You had quite neatly side-stepped the L:en Brown affair and I thought you had acted quite 'stately' in taking that stance, but then-----you come out with this stupid politically inane statement.
Lets take it as a given that no party is free from skeletons or nasty secrets. Do you really think that your utterances on national TV are anything more than a feeble attempt to embarrass Labour, or any other party for that matter? I was flabbergasted when I heard you rant on with that silly look we have come to know and try to appear 'above the crap' that people get involved in? Anyone with half a brain knows that such statements will place you in that vulnerable position that you would wish to avoid, simply because your own politicians in the National Party, to say nothing of those who are 'allied to you,' will no doubt exhibit very human failings and then some. You have unleashed a 'monster' that will come back to haunt you as you head towards the morass that National is about to crash into, next year. Just when I thought you were handling a 'situation' quite well (I know that many who read my blogs will laugh at my 'nice' statement---or throw up!)  you make this gigantic political faux pas or to put it bluntly--you put your foot, both feet in your mouth. I don't mind; it just means that we see you for who you really are! A word of warning to Labour et al---don't get too cocky, because you too are more than capable of fecking up!
www.authorneilcoleman.com
Posted by www.authorneilcoleman.com at 10:24 PM No comments:

Sometimes signs are just too small---especially for a Jack Russell!

A few weeks ago, we decided to take a trip to Tauranga. It was a beautiful Monday morning and on the way it seemed appropriate to let Perdy out for a run. U had given her a brief ‘sojourn’ down at the Onehunga Bay, where I was hoping I could ‘take the edge off’ her manic behaviour prior to travelling.
We stopped at the home of the Fig Tree Café, hoping to enjoy a nice coffee and a slice, but being Monday, it was closed. He’ll, they deserve a break eh! We settled for a takeaway coffee from another establishment and then walked along the road to a huge park, where we released Perdy so she could run and cavort to her hearts content. There were no other dogs present. Maybe the village just doesn’t have dogs. Oh well, she would have to be happy with whatever time she had and chase her ball while we sipped our coffees.
I didn’t know that Perdy had plans to embarrass me. Yes, she did have a little poop and I assumed that the other picked it up as I remembered seeing them bring a little blue bag for the obvious purpose of collecting Perdy’s poop. In the meantime, Perdy managed to manoeuvre me into a very guilty position, where unknown to me the accompanying picture was taken. I received it today from one of those who had travelled with us. Perdy---you knew that was happening! If you can’t see the picture, go to my website and check out this blog.
www.authorneilcoleman.com   Follow the links from ‘blog.’
Ooops! 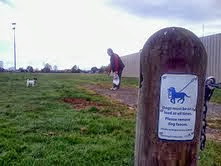 Posted by www.authorneilcoleman.com at 11:52 AM No comments:

OK, I just said that to get your attention, USA. Life is not really like the scenes we see played out on our screens as in Desperate Housewives, or is it? It certainly isn't like that in little New Zealand is it? Those funny, somewhat sinister scenes we all like to laugh at and then cringe as we recognise something that we know is just below the surface, seem to attract us like a moth to a bright light. Recent events in New Zealand, and Auckland in particular add weight to the possible unity of the darker side of human nature, especially when it comes to power and politics. You only need to read my recent blogs about the goings on around the mayoral elections in New Zealand's 'Queen city, Auckland and you will know what I mean. I judge not and merely observe and of course comment. It is said that some bloggers (certainly not me, as I hardly rate re readership numbers, unfortuanalty) have contributed to the whole affair as they drag the secret affair of the Mayor onto the main pages of our newspapers and onto our TV screens. The Desperate Housewives analogy is just circumstantial rather than factual and just a tool to describe that 'potential weakness in us all,' that at times come to the fore and asserts itself in ways that go way beyond our control. Such 'newsworthy' chapters in the lives of our leaders would be better left in the bedrooms and hotel rooms rather than divert us from the tasks that have far more meaning. Why do I write about it? Why---because I am both annoyed at a leader I like and angered at the nasty politically based plots to unseat and debase the democratic process. One wonders why the other 'candidate' and his cronies, who protests from afar does not front up and challenge the target of the 'reports' we hear each day. There will be many losers in this political but very human fiasco!
New Zealand; must we follow big brother USA in everything? Yeah, I guess that's a whole lot better than other models in other far off places, like---I won't go there!
www.authorneilcoleman.com
Posted by www.authorneilcoleman.com at 1:39 AM No comments: