Who needs a watch dog when you have this?!

No, I am not giving my dear Perdy away and yes she is a great little watch dog. She has a different bark for different people. She barks one way for friends and neighbours and another very distinct bark for 'strangers' especially salespeople. Perdy has 'educated' the neighbours as to which category any visitor belongs. They even know when she is barking at cats. Perdy runs outside whenever anyone or any animal comes anywhere near our house. She even knows the different cars so often it is a bark, followed by a bored yawn and a return to her couch, upon which she places herself to sleep and wake at her pleasure. Sometimes I really need an active watchdog to frighten the crap out of some visitors. That is when the 'beastie' in the pool comes into play. That crocodile has elicited many a response as it surveys the 'prey' from the pool. Anyone daring to enter without permission risks losing a hand, head or they may even disappear, never 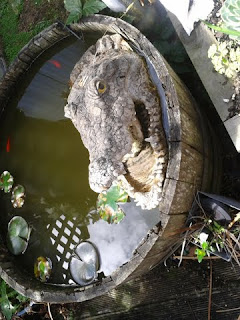 to be seen again! What a great Aussie import!
Posted by www.authorneilcoleman.com at 11:01 PM No comments:

Five year old given a rifle as a gift---goes on to kill his 2 year old sister---did I hear correctly?

I guess that in a country of nearly 400 million people there will be a proportionate number of total 'fu--wits.' Yes, New Zealand has it's own home grown ones, but so far we haven't read about a five year old being given a gun as a present and then go on to accidentally kill a younger sibling. (yes, we have had older siblings kill younger ones though. The difference between the two nations (and Australia) is in the attitude that allows such tragic actions. When is this 'love affair' with guns going to stop, America? What society can sanction such stupidity? Is it so ingrained as an inalienable right that then allows such tragic accidents to occur? I know that many American share my view, but the Senate did not have the guts to act when they were presented with a very mild piece of legislation, aimed at taking some of the 'edge' off the danger surrounding guns in the USA. I know, most Americans who own guns, do so in a responsible manner and most Americans are not part of whacko 'survivalist groups.' I leave those twats out of my discussion, mainly because they probably can't read!
My heart goes out to the family that has just gone through this terrible incident. They must be feeling incredibly guilty. They know of course that they are part of that tiny minority that lives with guns in such an irresponsible manner. It all goes back to numbers, plus the history of the USA; a country that has not managed to move beyond the 'frontier days.' Perhaps the USA needs a new 'frontier'---like in Star Wars, because the one they refuse to leave behind, still has its terrible grip on society.
Posted by www.authorneilcoleman.com at 9:45 PM No comments:

My day in Thames--lovely, except for their dislike of 'dogs.'

I loved my day with Perdy in Thames and the coast just past the town. We had gone there to pick up an item from 'Bliss' that I had won on Trade Me. The beach we first stopped at had sign that dogs needed to be a leash---fair enough, but Perdy needed out, not just for toileting, but for a manic run. We travelled another kilometre and the beach had no sign at all so we figured Perdy could have a run. That she did as only she knows how. Thankfully she stayed away from the end where there were hundreds of birds resting on the sand. I kept Perdy's attention focussed on the ball. That is not hard. Once she had shaken the dust off, we headed back to town, but stopping for a few minutes at a local real estate agent to inquire about renting a holiday home at Xmas; one that would allow a Jack Russell to take up residence. I felt a beginnings of a plan for Xmas 2113 coming on strongly.
By the time we had parked the car and started walking along the main street of Thames, it had started to rain. We were stopped in our tracks by a sign on the edge of the shopping area that clearly stated that dogs were prohibited. Being law-abiding citizens from the big smoke (where such signs are indeed rare) we put Perdy back in the car and parked outside a little unassuming seafood takeaway (Central seafood's) shop. I was able to have a salad of raw fish and other seafood for the tiny price of $4.80. See what I mean about my food bill being less, even for eating out.  I love it, but I didn't love the unfriendly dog-hating attitude of this beautiful, historic town. What's up Thames? Do you have a little clique on your local community board that just doesn't like dogs or has there been a problem with misfit dogs (read their owners) who have either allowed their canine family to crap on the footpath or attack the citizens of your town? Maybe the 'board' needs a shake-up. Maybe I should come on down there and live there, stand fort election on the assumption that things need to change. Don't you realize how many 'visitors like to bring their doggie-buddies with them and that your cafes would flourish with the addition of water bowls on the pathways. Take a trip to Auckland and check out just how many areas have heaps of dogs sitting peacefully at the cafes. You can always ban unruly barkers or pissers etc.. Hell, you could create employment for a few rangers! All you have to do is fine bad owners for allowing bad habits and the fines would make a profit for the town and employ one or two people. (Mmm, sounds suspiciously like 'revenue collecting!'--what the hell) Come on Thames, join the real world! I just love your town and the area to the North! You are indeed a hidden jewel for NZ. Is it that you want to keep it that way and just stay in some sort of time-warp? NO--- I think that the people of Thames need to have a say in your doggie-ban. OH---you are not alone though. I think Raglan has a problem with doggies too.
Posted by www.authorneilcoleman.com at 8:47 PM No comments: