With all the furore over the 'Len Brown' affair, the lack of support by the City Council for a living wage for its employees and on a wider field has possibly gone below the radar. This is a pity as the issue deserves much more attention. Even trying to live on the proposed 'living wage' is damn near impossible for many in the largest city in New Zealand. With housing prices sky high and rents to match; add in transport costs and there is a huge problem for a significant proportion of Aucklanders. It is not as easy as moving away from the 'queen city,' as the jobs are just not where they are needed, in the provinces. I know I have advocated all sorts of solutions in precious blogs, but the fact is--living in Auckland is indeed hard.
That the Auckland City Councillors had a chance to lift the burden, if even only slightly, was missed is sad. That two councillors from South Auckland voted against the proposal is even more worrying. They are out of touch with the community that put them into their positions, but more to the point---the South Auckland community did this by 'not' getting out to vote! There are many reasons for this; some say the apathy was particularly strong in SA, but that is not the complete picture. It is not uncommon for various sectors of our communities to feel disenfranchised; through a process of wearing down people. It is not about not caring; it is more about having to put total energy to eking out a living and having little left for 'politics and movements' that could actually change things. BUT---if change is going to be on the horizon, a movement needs to start whereby more people get out and vote----for representatives who will fight the bog fight, to get a fairer and more equitable society---one that we used to have in the past. 2014 is the next opportunity for such a change.
www.authorneilcoleman.com
Posted by www.authorneilcoleman.com at 9:31 PM No comments:

The food bill is so cheap now---don't ask about the clothing bill!

Eating out has taken on a whole new meaning for me since the bariatric operation and now that I have stabilized for a month, I am enjoying the new challenges associated with choosing the right balance when I visit food-courts, restaurants and cafes. One thing that has become wonderfully apparent is that the bill for the visit has gone down dramatically. Going to my favourite food-court in Otahuhu (Mason Ave---the one featured in Roskill---check it out on my website and download it on Kindle) costs as little as NZ9.50 and I have enough food for the evening meal and the next night too, in the form of the doggie bag I take home. It is actually enough for three meals, but I share the 'remainders' with Perdy. Her table manners of course betray her for what she is-- a Jack Russell, also featured in Roskill.
Given the new possibilities re my 'eating out budget,' maybe I can explore more exotic and expensive cuisines. Suggestions anyone?
www.authorneilcoleman.com 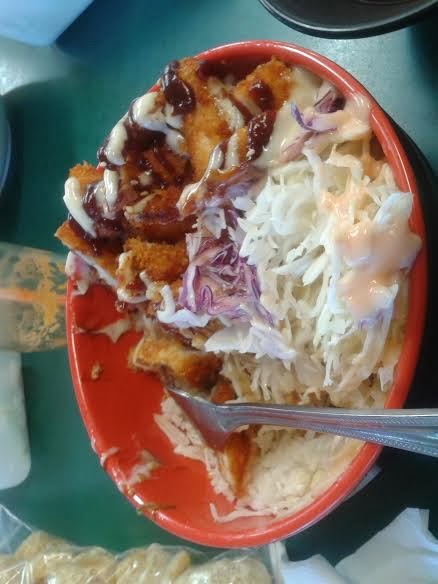 I could only manage a third of the meal. I think I can afford caviar at this rate!
Posted by www.authorneilcoleman.com at 7:51 PM No comments: