China is in a difficult position!

China comes in for a great deal of flak in relation to the South China Sea. It has made its position clear that it has the right to 'police' the area that is claimed by several nations. That 'oil' figures' in the equation, should come as no surprise. Imagine the USA's reaction, if oil was discovered in international waters, off the coast of California. I suspect that a few 'aircraft Carrier groups,' would make a semi-permanent appearance!
China faces a more direct threat, one much closer to its borders---the Korean problem, North Korea and its perchance for a 'nuclear deterrent, to be specific. The Dear Leader, of the 'Hermit Kingdom,' displays personality traits, not too dissimilar to his nemesis in the USA. (OK----maybe Trump is showing signs of actually listening to his advisors a little more without 'executing,' them!)
China no doubt tried to limit the damage caused by the tension on the 'peninsula,' but we are still observing a gradual move toward Noth Korea becoming a fully-fledged member of the 'nuclear club.' If we thought that Pakistan (or Israel?) represent a threat to world peace, then that is dwarfed, compared to the unleashing of North Korea's potential 'off the planet repsonse' to the Dear Leader's perception of what constitutes a threat.
Back in the days when the Peninsula erupted into a war, China was just emerging as a modern nation, having undergone a revolution that had cast off 'Western influences,' and was flexing its muscles, when it came to its own backyard. The North Korean/Sino relationship was more 'direct' and China was still yet to take a real 'great leap forward,' one in which its citizens gained in a far more pragmatic manner.
China is now a full member of the economic framework of the 21st Century; many would say the 'predominant member!' In the meantime, North Korea is the subject of various internationally imposed sanctions, and its economic efforts are skewered towards developing the 'military capacity of the nation, at the expense of a 'decent' life for its citizens. Life for the people of China is vastly different to that of the people across the border and any war, started by the North Koreans, or the USA, would impinge hugely on China.
It is becoming increasingly clear that China does not want a war, that such a conflagration, would spill over to affect much that China has gained over the last few decades. If there was ever a time, when cool heads were needed---we are witnessing it now. One would hope that China's experience re 'diplomacy,' one that has existed for thousands of years, will transcend the actions of the 'fools' who would take us to war--the ones in North Korea, and those in Washington.
Any move to 'disarm the nuclear capacity of North Korea, must be inclusive: China/USA and yes Russia! Therein lies the vexing problem---these nations must get beyond the underlying tensions, we are witnessing on the world stage. Can that happen? Will that happen?
IT MUST!
Posted by www.authorneilcoleman.com at 4:28 PM No comments:

Perdy, the wonderful little heroine, Jack Russell from Thames, New Zealand, has decided to up the game, contribute to the welfare of her supposed master, Neil Coleman and go PUBLIC.
Perdy has been through a great deal, since moving from the big city, Auckland, about an hour and twenty minutes away. There have been storms, a rescue, lots of 'running away events,' plus all the adventures associated with moving to a new home. She has a group of hens to look after, but her idea of the latter is somewhat askew from that of her Daddy, Neil!
Perdy has recently stepped into a new role, that of 'Media Manager/publicist,' for her Daddy's books, ROSKILL and TALK TO ME. It has been a bit of a rocky road, a bit like the storms we have been having down here, but surely there must be a 'silver lining,' in the mix. One quality Perdy shares with all Jack Russells is her propensity to be stubborn, tenacious and downright single minded! To her----those 'traits' are in her DNA---simple.
Perdy engaged in a huge leap of faith, by volunteering to be 'in' one of the books, but to protect her privacy at the time, decided to go 'incognito.' Yes, Perdy became SPOT in Talk To Me. The book is about a hard working talk back radio host Gary, who becomes the target of some pretty nasty stuff, in the book. Suffice it to say, because Spot does not want to give away too much, things to get a bit naughty at times!
Here's a direct address, from the clever little girl:
'Look---the only way for you to find out what I get up to in Talk To Me is for you to download the book from Amazon. Just go to Neil's website (featured at the bottom of this 'post,') and click on Neil's Books. Sadly, you can't get a hard copy of Talk To Me, but hey---the download is really cheap. It would be really great if you let us know on FB if you have downloaded the book---or Roskill (Which IS available as hard copy!) so I can advise Neil about MY performance in my new role. Heck---you don't want me to lose my contract, I hope!'
Perdy has played a part in Neil's efforts to get Roskill  'out there,' too. She has attended launches, road trips to bookshops and picnics in the park when she lives back in Auckland.
Here's what Perdy says about ROSKILL:
'ROSKILL is a story that all parents of teenagers should read and all teens should read if their parents enter the dark world of 'P" (Methamphetamine). Unfortunately, New Zealand has a huge issue with this scourge on society, where families are destroyed along with businesses, all because this substance has taken hold of the user. Roskill is a 'hard to put down,' book, just as is Talk To Me. They are very different books: one a humorous and somewhat cynical 'take the piss,' swipe at the talkback radio industry and the other a challenging story about what happens when 'adults do what they tell their kids not to do!'
A final word from Perdy:
'Thanks for following my exploits on FB and other media. I love life. I want people to be safe, to be happy and for the world to be perfect. IT"S NOT, but I am not going to stop enjoying life. Read Neils books and please let us know if you have downloaded them or purchased hard- copy. Feel free to email me at'
neilcolemanauthor@gmail.com
Here's the link:
Thanks, my dear friends.
www.authorneilcoleman.com 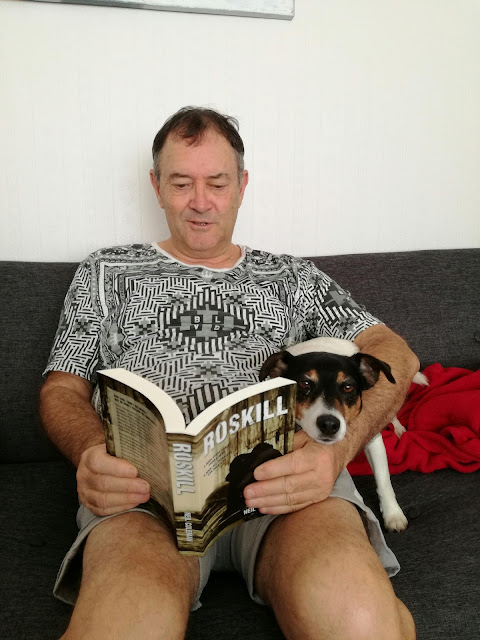 Posted by www.authorneilcoleman.com at 4:19 PM No comments:

I am so proud of my little hero---PERDY!

I am home now, sitting here, contemplating the events for the last hour or so. I am thankful for the curiosity, the singlemindedness and stubbornness of my little Jack Russell, Perdy. Those factors came into play, today in a manner I have never experienced before.
Around 3.30, today I took Perdy for an afternoon walk to the beach, near where we live. I had just finished mowing the lawn and having a bite to eat, so the big date scone probably needed a walk-off and Perdy---well she's a Jack Russell who NEVER refuses a walk.
We ambled by the stream, which seemed to have lost its anger, after the crazy weather most of the North Island of New Zealand has experienced over the last few days. Gone was that contortion, that tumbles stones millions of times more violently than my little stone tumbler, an item that we seek treasures to process, on our walks.
After we left the banks of the stream, we headed towards the pathway that fronts the retirement village, The usual 'characters' were present, many hundreds of Oyster Catchers and other seabirds, all resting, after having been in the Firth of Thames, hunting and doing what every they do 'out there.'
Perdy started her pulling, something that I must admit, I have not made much progress with, other than to 'slightly' lessen the intensity.
She persisted and added her voice to her actions. She became quite stroppy and kept pulling me back---past the area we had just left. She WOULD NOT give in. Her barking increased, causing me to glance towards where she was attempting to drag me.
It was then that I noticed an arm. I froze--then headed over to the bank, where I noticed that a person was stuck, between the rocks and the grass. She was crying out, but the sound of the waves carried her frail voice away from the homes, that were less than twenty meters away.
I bent down, Perdy still attached to me, via the wrap around leash.
'I've been yelling for an hour,' the lady said feebly.
My mind went into overdrive. What to do, scream for help, try to get her out, was she hurt, what if I hurt her more by moving her, were those bruises on her arm, how heavy is she? The questions kept playing in my mind, but suddenly I knew I had to get help---fast!
A flash of orange attracted my attention, on the other side of the pathway, It was a guy, with a small truck---the ka bel said something about 'painter.'
'Mate!,' I  yelled. "Help me---there's a lady who's fallen down---I can't get her out without hurting her!.
He came running and a fellow worker, a fit looking young woman, joined us.
The trapped lady was able to talk to us and was more concerned about  NOT being heard, than with any potential injuries.
The two young people were brilliant. It was almost as if they had some level of training for such situations. They KNEW what to do, and between us, we managed to gently lift the lady onto the grass, where we asked her if she was hurting anywhere, and which of the units she had come from.
She pointed to the nearest unit and even managed to stand up---unsteadily, but there was no keeping her down.
As we approached her unit (I picked up the two containers she had dropped----she had been feeding the birds!) an elderly man popped his face out of the sliding door.
'We should ring management and get a nurse over here,' I implored.
' No need,' the lady said.
My young helpers pulled out a cell phone and made contact with the village management, she assured us that she was on the way, in spite of the objections of the lady.
We were thanked and I asked if I could check on her the next day.
AS we left, I thanked the two young people, telling them that I could not have managed the situation on my own.
It is now, that I am sitting here, at home, that I wish that I had asked for names---of everyone. I didn't. Things just happened so fast. I look at Perdy---sleeping on the sofa.
What a little hero and she doesn't even know it.
I will go and introduce myself, tomorrow. Perhaps a jar of my jam may go down well.

Posted by www.authorneilcoleman.com at 10:05 PM No comments: