I have told you many stories from the 'Coast,' some of them have been a tad far-fetched, but that goes with the territory, of awakening in Paradise. Truth tends to become--enhanced,' or 'augmented as it were. Take today's little ditty, for instance.
Before coming to live in this little part of New Zealand, one that 'punches way above its weight,' in terms of beauty, and other incredible aspects, I was told legendary stories about the size of the rats. If I took them literally, I would have gone out and bought huge dogs, of a breed that excelled even the skills of my beautiful Jack Russell, Perdy.
I stored that 'knowledge' of these mythical creatures in that part of the brain, that is only accessed upon being exposed to the reality, rather than the former. Today, I was confronted with that apparition--- of nightmares.
Last night was one in which the rain fell, not to the point of previous 'one in a hundred year storms,' but enough to make me wonder if the garage was going to be reformatted in a 'Venice-like' appearance. (It's kind of weird that the news media keeps reporting these 'weather bombs' in a manner that makes one wonder if the description is becoming a bit ----over-used!) I entered the garage, hoping that I was NOT going to be throwing our more damaged goods.
I stepped inside and there was no sign of a flood, but there was something else! I saw a huge tail, scampering behind some 'stuff,' that needed sorting. It was almost black, but I could not be sure, as the light may have been playing tricks with my ageing eyes. The tales I had heard of the Thames rats impinged on my thoughts, exaggerated and massaged by visions of the beast crawling up my track pants. What a thought!!!
I quickly gathered the chook feed and left the garage, planning a Macarthy-like return to conquer the invader(s). Once back inside the house, I conversed with Perdy about how it was time she 'earned her keep.' She looked into my eyes in a way that said---'Daddy---just let me at it!'
I stuck Perdy on her leash. I did not want her disturbing delicately balanced objects,' thus turning my garage into an even more chaotic state. I need not have been concerned. Perdy headed straight to the area, whence I had earlier observed the---tail.
She became most excited, sniffing, and scratching in an attempt to get at the beast. It was then that I heard a----meow! What the hell?!! Since when had rats learned to meow? Jeeze, these Thames rats are something else---ventriloquists or Shapesearaen actors to say the least!
A change of tactics was called for. I retreated, knowing that Perdy would not give up and to prove the point, she set up that barking that is specially reserved for---CATS.
'Shut up, Perdy,' I yelled, 'The neighbour is asleep!'
We returned to the house, leaving the door open, in the belief that the 'cat.' or maybe---rat, would leave the garage via the open door escape route. One can but hope. To increase the chance of a vermin-free garage, (There are mice there---I have been surprised by a few scrambling out of the chook feed, but they don't particularly bother me) I decided to take Perdy to the rain-sodden park down the road.
On our return, we re-entered the garage. Perdy headed straight for the area from whence the meow emanated. She was not as 'energetic' in her response, which had nothing to do with her having had her short walk in the rain, but perhaps a great deal to do with the possibility of the 'crat' having left the building. I could hear Elvis singing and the audience clapping.
Dear readers. That I can write a blog about something so trivial says much about my changed life. It also informs ME, that I am content. The 'Coast' is my place, now. Cats, rats---stones and'stuff' from the beach, gardens, veggies ect ect--------------- 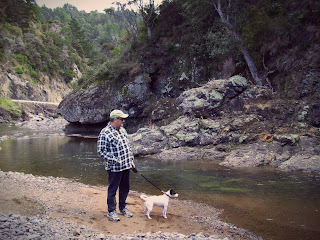 Posted by www.authorneilcoleman.com at 3:22 PM