Ran into David Shearer on the beach at Pt Chev today!

NO I didn't literally 'run' into David. I'd save that for the 'Dear Leader.' Oops, I got that wrong. Didn't someone try and fail to run into dear Johnny in South Korea. Sorry, I got a bit excited and I an not so nasty as to want a success on that line anyway, despite my obvious dislike of JK and his Government, but we live in New Zealand, 'Land of the Long suffering cloud,' and we don't do things that way.
What we should have happen is for the two Davids to sit down and make things happen so that we don't have to suffer any longer. Both Davids are really great guys. Both have that something special that NZ needs to raise its head and feel proud again. I doubt many JK supporters read my blogs so I don't expect any upfront vomiting from those dear readers taking my observations too seriously.
It was good and somehow 'normal' to see David S  having a family day. We need our politicians of all ilk maintaining that connection with the real aspects of life---'like taking a wander' along the sand at a lovely beach. Go well, both Davids. DS must be OK---Why----because my dear Jack Russell, Perdy is a very good judge of character! She did  not bite him.
www.authorneilcoleman.com
Posted by www.authorneilcoleman.com at 7:45 PM No comments:

There are many beautiful places that are 'dog friendly' in Auckland. Here's another one.

Point Chevalier beach on Auckland's beautiful Waitemata Harbour is just one of many beautiful beaches where dogs can have fun; all day during non-daylight savings hours, and for limited times in the summer. There's no need to always hit the same old places. hey, dogs live a bit of variety too!  To top off the experience there are also nice cafes to grab a coffee and a bite after the walk. Roll on summer, but I must say, today is mild and sunny.
www.authorneilcoleman.com 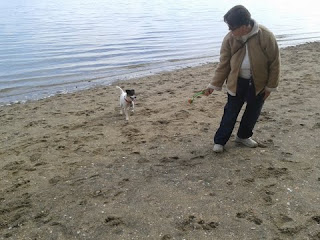 No, that's not me in the picture; I had bariatric surgery, not a sex change!
Posted by www.authorneilcoleman.com at 5:20 PM No comments:

Matt McCarten---He 'suggests' that Kim Dotcom could be a political reality!

'Surely not,' you say. How could this publicity seeking giant take on the Prime Minister and then be in a position to influence Parliament? Matt makes the suggestion that this could be possible, given the amount of support that KDC seems to have in the community. Whether that translates into political influence depends on KDC's taking on the role of forming a new party. So far he has not said that he has aspirations in this area. If he did, it does seem feasible that there could be enough support for his cause from nerds, computer hackers and the like, who spend most of their time indoors gaining that pasty look that goes with the territory.
Add those who wish to 'shove one' at the PM and you could well have the scenario that Matt so cheekily puts forward. Hey, just think for a minute. How many of the KDC followers actually get out and vote? Not the obvious 'shove it' to Key lot---they usually belong to other parties, other than a fictional KDC party, but if the nerds ever get organized and drag themselves to the polling booths, then anything is possible. Maybe their supporting of KDC will have the added virtue of improving their health.
OK, so the impossible happens. Poor Key. Who the hell will he negotiate with? Not Dunne because he's 'done.' Not The Maori Party, because they won't exists (in parliament) and certainly not Hone, because Key would take a bad health down-turn' if he had to talk to Hone at length. Who then? Damn, will he have to swallow every bit of pride he has left and do a deal with  Labour? Of course not; he would get into bed with Winston again! Oh, there is always the possibility that Banks does a Lazarus or God forbid, the Conservatives get over the threshold and force a return to some policies of old, many of which even the National Party has long since left behind in the annals of history.
Maybe Johnny boy hopes he will lose!
www.authorneilcoleman.com
Posted by www.authorneilcoleman.com at 2:08 PM No comments:

got rid of Sky Sports and most of the films---Can I cope?

My God, the first few days were terrible. No films, apart from the odd one or two on TV 1,2,3,Prme and the Maori Channel and no sports. I did this to save money. I'm practising for the time when such costs will not be affordable---retirement, theoretically, although something tells me I shall be working for many years in some capacity.
I surprised myself tonight. I watched, observed, followed, call it what you wish, the game between the Crusaders and the Chiefs in Hamilton. No, I didn't do it the old fashioned way; the radio. I followed live from the NZ Herald site where they had a live blog. I even managed few comments of my own. Man that felt so butch! Damn, it was nerve-wracking; just like the old days when we huddled around the radio---you know the ones--- the old valve radio.
I think I shall be OK with my half price Sky now. I record all sorts of programmes and 'time shift' to suit me. I just hope I don't fold and ring up Sky to say, 'please---it's all too much---put me back on!'
I shall resist that urge. The money I save will go towards my dream campervan; the one that I shall travel NZ with and write my stories and my blogs.
www.authorneilcoleman.com
Posted by www.authorneilcoleman.com at 2:29 AM No comments: