Leave the Ukraine alone---does everybody need to get their 'bit?'

I guess it is Ukraine's strategic geographic position in a 'sensitive' area of the world that makes it a target for Russia and the USA/EU. Both are doing their best to 'drag Ukraine into their sphere of influence. I do not doubt that Russia will win in the end because it had been poring agents and using other methods for years to gain back it's former subjugated ally from the former Soviet Union. It is quite prepared to use bully-boy tactics just as the West uses other less obviously 'heavy means.'
I suspect that Russia is prepared to go to the edge in order to achieve its aims. Lets face it, Russia never left the Crimea and has been sending in Russian citizens to booster the numbers those who would naturally ally with Russia. All it needs now is an incident that could lead to a full-blown invasion but that will probably not be necessary, as the beleaguered nation pulls itself apart.
Ukraine is a divided nation and the only real solution will probably be one whereby it 'splits' into a 'pro-Russian' sector and one leaning towards the West. Is that so bad? What must happen though is that Ukrainians are left to make that choice for themselves. Somehow, other powers are not going to let that happen, hence more suffering for the Ukrainian people.
www.authorneilcoleman.com
Posted by www.authorneilcoleman.com at 6:23 PM No comments:

Judge how free you are by the extent to which the 'truth'can be reported!

I have written a great deal (via my blogs) about many aspects of freedom, corruption, cheating, and the more negative aspects of life in a number of countries, including my own. Of course on the 'freedom to express your thoughts and beliefs metre', there is a huge difference between those nations. In some, no such right exists and in others there is an apparent downward slide as megalomaniac leaders or groups take hold over their respective countries.
I have often criticised the USA for a number of reasons and I have 'shoved the stick' at our neighbours across the ditch; Australia, but not for lack of freedoms (yet!). But, it has to be said that in the USA it is still possible for a large range of views, being expressed and lived, ranging from the 'cult-like' groups who espouse certain religious/cultural beliefs, right though to the abhorrent actions of racists marginal sectors who still hold to old, dangerous and badly informed criteria. Those groups of course are under constant surveillance.
The USA is a huge country and that such a range of espoused beliefs should come as non surprise. These groups quote the Constitution as the basis for their right to exists and for now, who am I to challenge that, even if others suffer because of that?
If we look at the less extreme in the USA, it is not hard to see enacted every day on our TV screens and other media, the constant belittling of the leader of the USA, The President. On one hand we have the likes of Fox TV who seem to be constantly trying to curtail his Obama Care along with many other aspects of his Presidency. Fox can do this, just as other news outlets can proclaim him as their 'hero.' This is how it has been for a long time in  the USA, even though at times there have been curtailments upon the freedom of the press and others to express their views. Take the time in the 50's when a certain head of a major Governmental organization took it upon himself to throw a spanner in the 'freedom works.' That period in American history has gone but not forgotten, because it must not be, or it will arise again.
The difference between the USA and it's 20thC rival the USSR and now Russia, is that the tradition of free speech in the USA runs so much deeper and one that many (on the extreme) would take up arms to defend that right. In that respect at least I can understand the position some on the' gun lobby' side take, but I still will not be swayed that unfettered gun ownership protects democracy.
The differences between the USA and Russia are huge. For every move that any President in the USA takes that may threaten freedom of then press, there is strong opposition, but the Russian leadership is able to take a move on the opposite direction, as we are witnessing on a daily basis. You can be assured that any thawing , is just for the time when the world is focussed on the Sochi Games. After that is all over, the regime will resume it's stranglehold over any voices who dare to criticise the new oligarchy.
I suspect that the USA will hold itself up as a 'torch to freedom,' and Russia will be there on the other side, as the Great Pretender.' The rest of us will be merely observers in a process that is way beyond our influence.
Those who are most influential in the USA will continue to play the 'balancing act' that they have pursued for decades; allow open discussion, but find ways to control anything that threatens their existence as the main power brokers within the USA. Compared to what we are witnessing (and not seeing) in Russia, such moves are lost in the comparison between the 'extreme' and the--well moderate. I know which country I would feel 'less threatened.' Then again, there is a lot to be said for living in a small 'democratic' country at the bottom of the South Pacific, where we all know one another, and still have the capacity to change things, if we bother to get off our butts!
www.authiorneilcoleman.com
Posted by www.authorneilcoleman.com at 1:01 PM No comments:

I am being 'watched.' Paranoia--the next stage of my 'journey!'

It's true, my every move is under intense surveillance, around the house that is, because outside the home, I can divert the attention, or invite others to take up the slack. Yes, from the time I awake and sometimes when I am asleep, I get this indubitable feeling that my very existence is being observed, traced, learned and then acted upon. The ultimate goal of the 'watcher' boils down to one aspect only. It is quite simple and one that is probably acted upon on a huge scale throughout my wonderful country; I (and you) are being observed, not via satellites and hidden cameras; no, nothing as sophisticated as that, but through the simplistic eyes of a 'being' that loves us. You reckon I am talking about 'God,' I guess and thinking that I have undergone an epiphany of sorts. Nah----it's even more simple and one I know you can relate to if you have a DOG! Yes, I cannot shake the inevitable set of events that begins before I awake to a new day. Perdy, my Jack Russell, just knows when I am not going to work. She figures out that the timing is different and that I don't seem to be in a rush, that I take my time cooking a delectable (bit small) breakfast, that I don't put on my better shoes, that I wear different shorts and T-shirt. She dammed well figures out that a 'walkies' is on the cards,' and I am therefore obliged to centre my morning around her needs. Yes, I (we ) am being stalked in our own homes and no amount of complaining to the UN or any other august body will change it. So---we/me must accept out fates. Let's face it---it is after all entirely in our best interests to get up, get ready and take a morning walk. OK, Perdy---you win---again and for the foreseeable future.May it be a long one.
www.authorneilcoleman.com 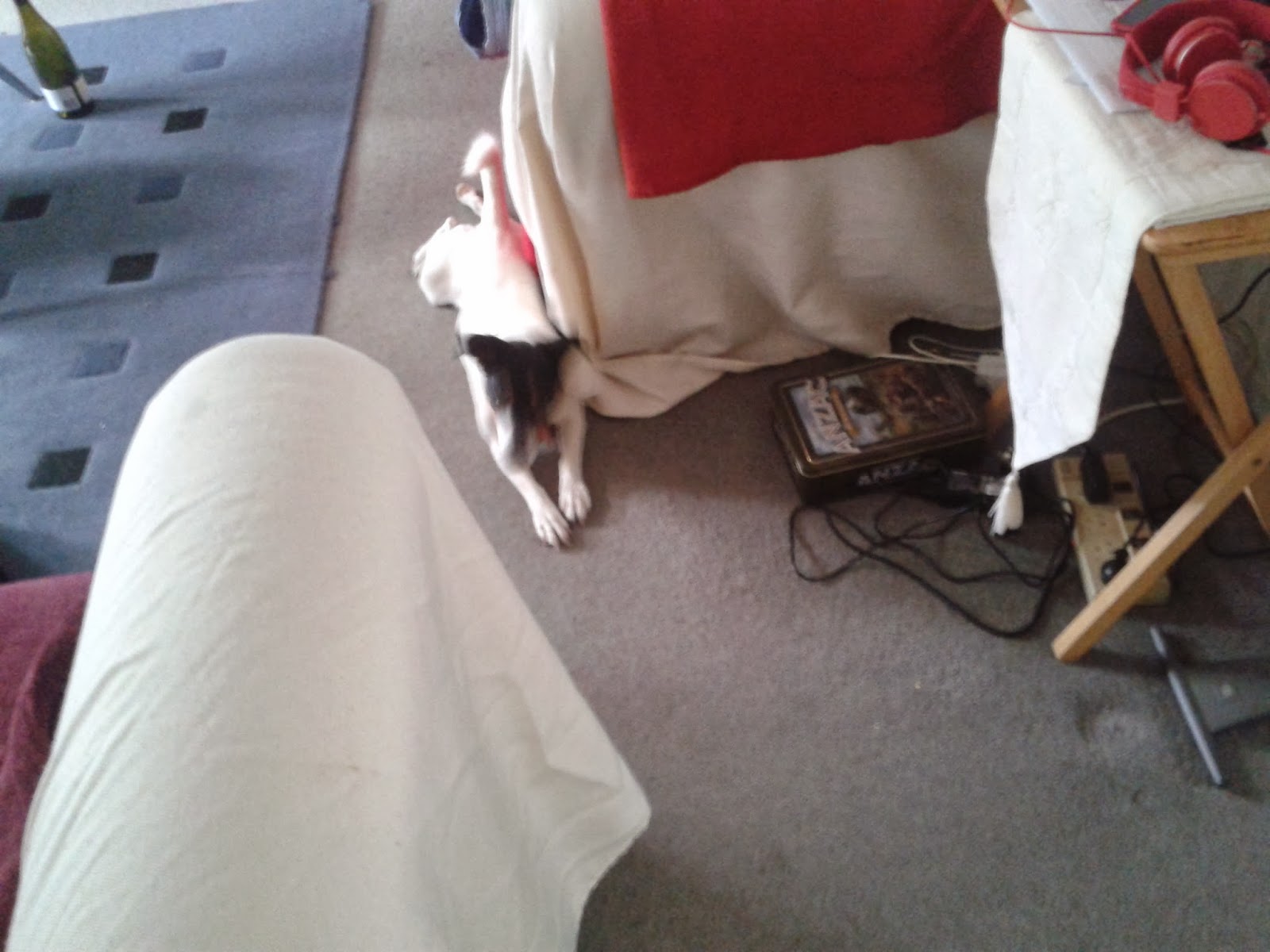 You are being 'watched.'
Posted by www.authorneilcoleman.com at 12:20 PM No comments: