Rainbow Warrior rises again to carry on the fight.

There is no getting away from the fact that the French Governmnet was behind the sinking of the original Rainbow Warrior back in the 80's. They took this action because the Rainbow Warrior played an active role in the opposition to French Nuclear testing in the Pacific, polluting a large area and destroying the lives of countless Pacific Islanders. New Zealand also played a leading role in the fight to stop this senseless 'testing.' Our Prime Minsiter at the time, David Lange carried the fight to higher levels and will always be remembered for his cutting comment---'I can smell the radioactivity on your breath!' Maybe not an exact quote but many New Zealanders remember with anger the actions of a wannabe colonial power that still controls areas in the Pacific.
Now the new rainbow Warrior has been blessed at the very site where Rainbow Warrior One was laid to rest. Go strong mighty Rainbow Warrior Two. Many New Zealanders will follow your voyages of courage against those who would attack nature and destroy our envinment. I am sure many French citizens will also take a positive interest in your story.
Posted by www.authorneilcoleman.com at 9:30 PM No comments: 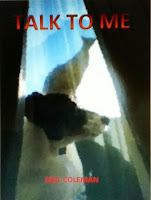 'Where Are We now? Yes, that's the title of David Bowie's latest release, after a ten year absence. Great--- I have always loved his music and I had almost given up on hearing new material. If the Stones and a few other 'acts' can last aslong as they have, then I am doubly happy that David has decided to join the  'living icons.' GO DAVID! Even Perdy loves his latest song!
Posted by www.authorneilcoleman.com at 9:05 PM No comments:

Crown Lynn on a diet?

A friend found this set of Crown Lynn under his house.

Unfortunately there are some chips on about six of them. Maybe I shall put them on Trade Me or maybe I shall give them away to a deserving friend. hen again, perhaps I can find some more to make the set complete and undamgaed. I have had a love affair with Crown Lynn for about ten years and I just can't help myslef. I am still buying examples of this iconic NZ product. MMMM--- that's sounds like my other obsession----food. There's no operation for loving CL. I don't think there's a diet either. Imagine what that would look like. Buy three, sell two---you get it--- the old yo yo thing. It just keeps getting bigger, just like me.
Posted by www.authorneilcoleman.com at 8:36 PM No comments:

Why would we be surprised at the opposition to President Chavez comes mainly from the rich and those companies that were nationalized under his presidency. It needs to be acknowledges that he and his party have been responsible for changing much of the inequality that existed under previous regimes.


Sure he stuck the finger up to the USA and other nations who may have lost out in the ‘changes,’ and his independent stance no doubt got right up the craw of those nations. That he became a spokesperson for many of the non-aligned nations would also tend to place him on the list of ‘unfriendly’ nations.


Now that the presidents health is poor and he may be facing his ‘last days,’ Venezuelan is at risk of been thrust back into the bad old days of corruption and elitist groups. One could hope that the impetus he has provided survives the challenges of a new person at the helm. Perhaps the changes Chavez has made have become ‘entrenched’ as the majority of the people see that returning to the old ways will directly change their lives for the worse.


I am not saying that the President has always protected the rights of everyone in Venezuela, but perhaps that is the cost for the greater good of the majority. Lay off Venezuela and their ailing president.
Posted by www.authorneilcoleman.com at 4:36 PM No comments:

I do not know the percentage of dog ownership for dogs in the Auckland region, but I suspect that it is very high. I also know that there are not many places where one can take their special friend to run and play with other dogs. I live in Hillsborough I take my Jack Russell to the Onehunga Bay every day and sometimes twice a day. She loves it and I have met some lively people and their dogs; to the point that I consider some of them dear friends now.


We all have in common the desire to explore other dog friendly beaches and the question of the Kakamatua Inlet came up as a place to take our dogs for a swim, run and picnic (yes for humans and dogs). My research has left me a bit confused. The Kakamatua Inlet is ‘touted’ by dog lovers as an ‘unofficial off-leash area.’ But some people have written at great length to say that it is most definitely ‘on leash’ during daylight savings hours. Who the heck would take their dogs to such a wonderful beach; show them the area and then tug them along on a leash?


Some writers were incredibly mean about dogs and their owners, quoting spurious concerns about the safety of their children. Others quite rightly pointed out that there are numerous other beaches for these ‘moaners’ opt take their dogs, all with a kilometre or two of the inlet.


Further investigation informed that the new laws will be implemented sometime in mid-2013 and that until then the old laws for the ARA apply and those allow ‘off the leash walking, running and cavorting. Am I right? If this is so, then ‘we the dog owners’ need to make our feelings felt big time with the new council. Surely we make up a significant portion of the populace and that our collective voices should be heard and indeed, make more beaches dog friendly. Come on my friends; (because that is what some of you have become) speak out. Reply to my blog and get things going or inform me about groups that already exist for this purpose. Put other political differences aside and unite. I feel more at ease with ‘humans best friend’ than I do with most politicians; both local and Parliamentary.


Read my book about my little friend Perdy (Spot in the book---‘Talk to Me.’)

Freedom of the press in China---unstopable?

I watched with interest a BBC item about journalists protesting in the streets in Southern China. They seemed to be doing this without regard for the ‘safety.’ They are brave because the authorities are becoming increasingly nervous at the number of such actions, some much more violent than this one.


It began when journalists wrote an article critical of the ruling Communist Party. That item was then ‘watered down’ by officials. The result: many journalists and supporters taking the decision to get out there on the streets and protest. What was noticeable in the news item was that numerous bystanders were recording the actions of the police and no doubt that will be widely circulated; not just in China, but around the world.


The ‘old men’ who make the decisions in China are way out of touch with their people. Yes, they announce that there will be less corruption and they talk about ‘green issues,’ but the bottom line is that the Communist Party does not take kindly to criticism. The leaders of China cannot keep the ‘genie in the bottle.’ As is the case of all societies, once the masses reach a standard of living that takes care of the ‘basics’ in life, they turn towards other ideal, like the freedom to write and read what they like. That becomes an unstoppable movement; causing the Government to either go along with the wishes of the people or becoming more repressive.


China is at a crossroad. Does it embrace the growing desire of its people for real change or does it look backwards to an oppressive past? Somehow, I think it is too late---China has only one choice. It must join those nations that espouse the basic right of their people to have a real choice in how they want their country to run. That of course brings the chaos that ‘democracies’ enjoy as the people play out the act of having multiple choices. It is going to be a torrid time in this massive and powerful nation. Its irrepressible people will have the final say.
Posted by www.authorneilcoleman.com at 12:39 PM No comments: