Perdy gave me that 'I wanna smack my child,' in the supermarket feeling today!

After work today, I took Perdy down to the park at Lynfiled. It is not an 'off-the-leash' area, but I do let her go over the far side of the field and she chases the ball until she is stuffed. Everything went well for a while and she chased a few seagulls and magpies just to add variation.  She seemed to be in a particularly 'vibrant' mood and after abut 30 minutes we headed back to the car park, where from past experiences she has always behaved and jumped into the back seat and off we go.
NOT THIS TIME!
Oh no, she seemed to sense the presence of some unknown 'beastie' in the bushes not far from where we were parked. Off she ran and after a few seconds set up a manic barking. I know that sound. It cried out 'cat!' I just knew I was in for a hard time. Sure enough, after I had crashed my way through the dense undergrowth (I use that description to magnify what was about to come!) I came upon a scene that held no promise of a peaceful end to my afternoon.
A brown possum-coloured cat was perched way up in the tree, looking down disdainfully at my rabid pooch. (I know, another total over-the-top description, but hell, I'm on a roll, brought on by my 'remembered frustration.) I tried to keep calm, as I was not alone. NO, a guy was standing by his car, maybe rolling a joint. He certainly gave me the impression that I was intruding on his 'pastime.' I decided to ignore him and I attempted to ask Perdy nicely to accompany me to the car.
She cast a backward glance over her shoulders as if to say, 'Feck off---can't you see I'm busy!'
She completely ignored me. My voice became more strident and my language more colourful.
'Get in the fucking car you little shit!' I said uselessly. I imagined being still in the park, after they had shut the gates for the night. That thought gave me reason to increase the level of my 'directive language,' all to no avail. In an attempt to draw her way I threw (gently of course) some dry sticks I her direction and if one of them had connected, I doubt that I would have been consumed with guilt. Man, I will never be condescending in my attitude when I see parents trying to clam (Yes I meant clam, not calm) a screaming kid in a supermarket, ever again!
Perdy continued to avoid me and to jump up about two metres up the tree trunk. The cat just looked down and gave me a distinct impression that it would gladly pee on Perdy if it could!
I returned to my car and started the engine. No luck. That usually works down at the bay in Onehunga, but then again, cats don't tend to frequent that dog-in festered place.
I tried another ploy. I grabbed the ball and thrower and when she popped her head out of the bushes, I threw the ball across the car park. She gave chase, returning it to me. She kept glancing back towards the tree and I threw the ball way out onto the sports field. She followed and we began a game a dog and mouse. Yes, I made that up, because even as I write this while Perdy sits CALMLY and watching the rain fall on the deck, I shudder at what could have been even worse.
My salvation came in the form of a beautiful black Labrador/Alsatian-cross. The friendly owner could see what was driving me spare and let his ten month old puppy go. She chased Perdy who turned on her to discipline her. The owner was delighted. I well remember other dogs doing the same for her. Finally, while Perdy was telling off the gorgeous doggie, I managed to grab her tail. I then got her leash attached and that was the end of Perdy's manic run. I thanked my gallant  knight and made my way towards the car. Once in the back seat I left for home.
Perdy watched the receding treeline, probably  marking the spot where that damned cat frequented. Will I take Perdy there again? Yes, but she will be on her leash way before I get anywhere near the car park. Maybe I am being punished for making up my own 'off -the-leash' rules. I am so sorry, oh great God dog of Jack Russell 'terrorists.'
www.authorneilcoleman.com
Posted by www.authorneilcoleman.com at 10:48 PM No comments:

Love your body day at James Cook High---in the rain!


Every Year the PSSP team (Peer Sexuality Suppport Programme) has a 'LOve YOur BOdy Day.They get the message out there that it's OK to be you, no matter what shape, colour or sexuality you are. Be Proud.
Of course the team got everything ready and were going just fine. Yes, this is Auckland and one minute the sun shines and then it bucketed down. So much for good planning. Take a close look at how the message changed. Blame it on the rain! 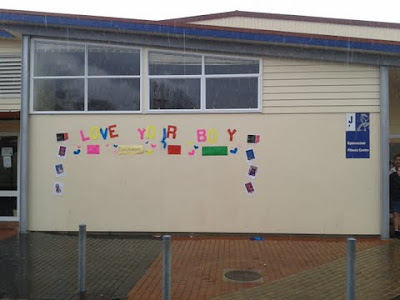 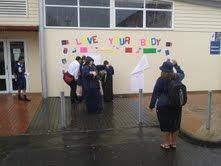 Posted by www.authorneilcoleman.com at 7:01 PM No comments: