Mmmm--- is she checking out a site for me? 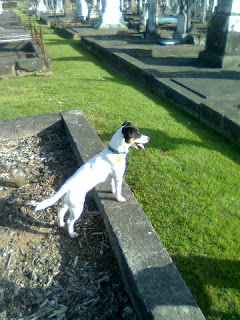 Is she really checking out a site for me?  Nah--- I was down at the Onehunga Cemetry

with the ladies and all the dogs--- it's really interesting seeing all the old graves-- way back at the begiining of European settlemnet of Old Onehunga. The dogs behaved themselves; not drawing too many dissaproving looks from other people visiting. I know some people don't like pets in such places, but its such an open park-like place, bordering the harbour, that I think it's fine. Oops-- my sistser has arrived so I better go and cook.
Weird posting--- I know
Posted by www.authorneilcoleman.com at 10:10 PM No comments: 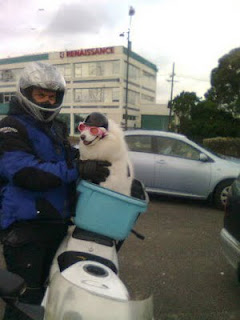 I love to take Perdy for her walk everyday and she lets me know big time, when that time is near. I was a bit late today, so she made sure that I was aware of her presence--- all the way to the bay--I think she may have reached about 70 decibels with her manic barking.
We arrived slightly later than ususal but the others were waiting. Perdy jumped out the car window and took off around the lagoon to meet her mates.
When we arrived back at the car park, we were met with a funny sight. Check it out. Gee--- I wonder if I could get Perdy to ride on the roof of my car; complete with hat and 'doggles.' Yes, that is a motor bike. The dog seemed quite happy, despite the cold day. Cute eh?
Posted by www.authorneilcoleman.com at 11:54 PM No comments:

Every so often I like to go and see my brother, Lyndsay in hamilton. Janice comes too,  and we like to enjoy a nice meal and a bottle of wine. We started off and stoped at Te Kauwhata and that  cafe in the main street. It has become a bit of a tradition; we alternate between the cafe (I think it's called City) and the herb gardens, when it's open in the Summer.
Everything was going to plan and we arrived on time at eleven. Lyndsay made us welcome as usual. The plan this time was to try out Janice's new pressure cooker. We had brought a bolar roast to test out in the cooker; supplemented of course by a Vila Maria premium wine. Nothing but the best for these ocassions.
I burnt the cabbage because the stove rings work sort of back to front-- age catching up there I think-- the stoves, not mine. Thank God for frozen veggies. I browned the roast in oil along with onions. The smell was devine. Once browned I added a cup and a half of vegetable stock and closed the lid. In the meantime, I cooked pototoe, carrot and parsnip chips in the oven. It's real simple, just cut, add some oil, salt and pepper and dried herbs and cook at 220c for 25 minutes.
I was enjoying a glass of wine while I watched the pressure cooker when all of a sudden I felt this sting. Shit--- had I been bitten by a white-tailed spider? I have never seen them at Lyndsya's place. Wham another one--- God was the place infested? NO--- I was been attacked by something qujite differnet. Take a look at the picture. I'll get the bugger back. Next time I go down there--- it's war! 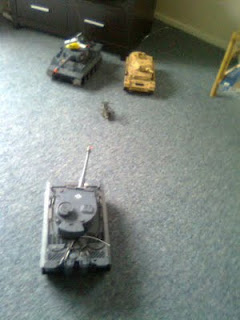 By the way--- the roast bolar was magnificent; tender, juicey with a majic gravy. 9Not Magi).

Posted by www.authorneilcoleman.com at 11:43 PM No comments: