'But I had a bad backgorund,' the horrific abuser will tell the court!

How can a grown man believe that punishing a five year old with a heater held to his face to the point that there are third degree burns and the child will need skin grafts, is OK? I felt sick when I read about this today. This happened in Christchurch and the man has name suppression. I wonder if he was known to CYFS. These things don't usually happen out of the blue. The signs must have been there. Perhaps 'mandatory reporting,' is a must! I work in the field where such issues are often discussed and my colleagues have divided opinions on the issue of 'reporting.' Schools for their part must make policies whereby they report any sort of abuse and the agencies charged with protecting our kids must be well funded and employ people who know what they are doing.
WE all must play a art in keeping our kids safe. If that means 'telling' when things are not right, then that is what me must do. Such actions must cut across all social groups and all sectors of our society, regardless of ethnicity or religion. Harming a child in this way is nothing short of evil. Lets all work together to take care of one another. If you know that a child is being harmed, ring 111, or---tell someone!
www.authorneilcoleman.com


File photo / Thinkstock
A five-year-old Christchurch boy suffered severe facial burns after a man allegedly held a fan heater to his face.
The man, in his 40s, has been charged with wounding with intent to cause grievous bodily harm after allegedly holding a fan heater to the side of the boy's face.
The boy suffered third degree burns from his eyebrows to his chin and will require extensive skin grafts.
Police and social agencies have been shocked by the child's injury, which occurred at a house in the Shirley area of the city on Saturday.
The man, who has name suppression, appeared in the Christchurch District Court this week and was remanded in custody without plea until August 6.
Detective Sergeant Darren Folau, of the police child protection unit, described it as a "horrific" case.
But he was amazed by the boy's "remarkable resilience".
Southern regional director Kelly Anderson said Child, Youth and Family have been working closely with police to support the child and family.
"This is a deeply distressing case where a child was seriously injured in a horrendous manner," she said.
"Our main concern is to help this child and protect them from further harm."
While the police investigation continues, CYF refused to comment further.

- APNZ
Posted by www.authorneilcoleman.com at 9:23 PM No comments:

Just becuase you won't eat it---do I have to?

I was sitting surveying my realm, making sure no cats or metre readers dare to enter my territory when 'you' decide to offload something you brought last night at the Onehunga Night Market. Apparently you brought too much and I think I heard you saying that the squid (whatever the dog damned silly thing that is!) was cooked for too long. And, yes you said, 'Perdy will eat it!'
Really---do you take me for a 'no-class' greedy bitch? Come on, I have tastes too and when I did try it, it felt like rubber. I know, I 'search, chew and destroy' most balls down at the park, but this took the cake. Actually, why not give me cake like that silly French Queen was purported to have said. Wrong again, because when you are at work, I watch TV and I learn many things. So you know what you can do with your squid------shove it right----back in the sea. Have I made my point yet?
Now on a sweeter note. Take me for a run----please! 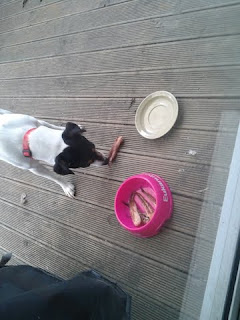 It's true, a dress made from toilet paper won an award in New Zealand recently. That does not mean that our beautiful country is going down the crapper! Maybe it is because we are a green country and have a belief in 'waste not want not.' Fortunately the dress was NOT made from 'used ' paper. That would have been taking things to extreme.
One of the ramifications of losing 35 kilos after my bariatric surgery is that I really feel the cold. I wrap up well and keep out the cold. Thank God spring is around the corner! Perhaps there will be a competition to use pink-bats for clothing. Damn I can't wait, but really---can't they make it blue! Also---won't it itch a bit?
www.authorneilcoleman.com 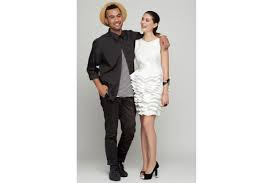 Toilet paper dress so why not a pink-bats coat to keep me warm!
Posted by www.authorneilcoleman.com at 4:30 PM No comments:

Are you looking for that' buzz' you felt when you visited the street markets of Asia or other parts of the world? OK, we can't replicate that feeling completely, but hey, we are way down in the South Pacific and things don't quite move so fast here. The Onehunga Night Market does it for me. Before we entered the car park adjoining Dressmart we caught the wafting odours of an array of foods right where it counted---in our nostrils. The stall operators were still setting up but there were already heaps of people wandering about. I brought a well-made cup of coffee from an independent vendor and we walked around, observing the choices and purchasing some socks from a stall that seemed to sell items from Korea---good value for $5 and woollen to boot.
Now it was time to eat. Remember I can't consume the amounts of old, post bariatric surgery. My gastric juices were rising and I don't mean 'reflux;' more like pure anticipation. What to choose? There are Thai, Indian, Chinese, Hungarian, just to mention a few. I tried one Thai fish cake, one wheel cake (savoury version) and finally a pork and corn dumpling. Wonderful and by then, I was done. My share of the cost---about $5 and we still took some home. If you want to experience something different, then go to one of these night markets. They are springing up all over Auckland and I suspect that some of the vendors attend them all. That's fine with me and hopefully we are going to be exposed to a much larger range of ethnicities and the tasty food that comes with that. It's great living in a city where such options are available.
www.authorneilcoleman.com
Posted by www.authorneilcoleman.com at 12:50 AM No comments: