Guess which one I am! (I know what's coming)

There are three people in the picture and one of them is me. I am either going to have the Bariatric surgery or if you get the wrong one, a sex change. The picture was from a BBQ I attended in the weekend. There were about 15 present and the kids did what kids do---they checked each other out and had a ball.
Here’s the recipe for the simplest ‘take to the party dessert’ you could possibly make. 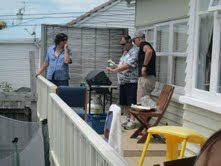 Crumble a cheap Xmas cake (I got mine from the supermarket---to for NZ$8) into the bottom of a dish. Pour on some store brought custard then top with berries. I was lucky enough to have some growing. If you wanted to tart it up a bit, spread some whipped cream (Not sure what you call that in the USA---NO it’s not cream that I am punishing!) over that, of course the berries would then go on top of that. Finally to be really decadent, break up some chocolate flake and sprinkle on the top. There were so many other desserts, so I didn’t have to do that. Yummy and filled our tummies. I couldn’t take a picture because they ate it before I could.
Posted by www.authorneilcoleman.com at 3:24 PM No comments:

If Israel builds the settlements on the West Bank, it's goodbye peace!

Firstly, let me state clearly that Israel is a fact; it is a nation state recognized by the world and has the right to exist within its borders and not be threatened by outside forces, whatever they may be. Anything less than that is unacceptable.
Israel has had a difficult history as it has had to fight for its very survival in some major wars. As a result it has built up a rock solid defensive ‘wall’ around its territory. It has also illegally occupied more land and held on in the belief that it was creating some sort of buffer-zone. Let’s face it; the borders are problematic when it comes to defending the country.
The latest move by Israel to build thousands of houses on land that one day will be part of the new Palestinian state is a worrying development. What does Israel hope to gain, other than some false sense of security? Who would live under such circumstances, unless Israel intends to further increase its landmass, by conquering more land and therefore leaving these new housing estates well behind the new borders? Are these settlements modern day defensive Kibbutz?
Israel is placing itself in a dangerous position re support from countries who have traditionally been her allies, at least in the UN. The latest actions are tantamount to telling the UN to ‘bug off’ and leave Israel to her own devices.
I am the last to wish violence and war upon any nation, but can Israel not see the ramifications of the actions; that they also amount to yet another challenge to her neighbours, be they moderate or extremist, bent on driving the ‘Jews into sea.’ That is the possible conclusion to this sorry affair. For Israel’s sake and her neighbours, I hope that this is not so.
Posted by www.authorneilcoleman.com at 12:04 PM No comments:

What more evidence do you need to get out of Auckland?

The latest figures for house prices in Auckland have taken another leap. Unlike ‘The Great Leap Forward’ in China in the 1950’s, this leap is one that does nothing to help those seeking to buy into the Auckland market. Not a good comparison you may say, but I was just trying to show you I had heard of that event in far off China. There is a link in that many Chinese may be buying property here and therefore pushing the prices up further, so there you are, there is a connection.
If there is even the slightest possibility for you to find employment in the provinces, go for it. Wouldn’t it be great, having a bigger disposable income? Imagine those overseas trips and the new car that you could never afford, if you remain in Auckland. The only problem is---that job!
OK-- let’s say thousands of Aucklanders leave for the provinces. That in itself would generate jobs in various forms: schools, services, retail and many other areas. If those same people brought any capital, then maybe that could create new opportunities. Is there a role for the Government to become involved in some way here? Probably not this Government, but they have done some strange things of late---take for example their vote re Palestine. That one came out of the blue.
Are you seriously considering a move? If so--- where? There are many lovely cities and towns in both Islands. Go north or south, young men and women, and as for us oldies----? The cities and towns elsewhere offer boundless attractions.  I’m sure we can make new friends. Only problem---will they accept us smart-arsed JAFAs?

PS---By the way; it's not that I don't like Auckland. I may be an ex Naki boy but I have lived here in Auckland for many decades and i love the place, but each time I see Egmont/Taranaki, I feel something.
Posted by www.authorneilcoleman.com at 11:02 AM No comments: