Electric trains arrive in Auckland---about time---fantastic. Mayor Brown was aboard.

Yes, the trains have finally arrived, after many years of deliberation, going right back to the days of Mayor Robbie. Today I had the pleasure of being one of the 'chosen,' (Don't go thinking I am getting above my station in life---my sister almost sat on her computer in order to score two tickets for the short ride between Britomart and Newmarket).
We left my car at the Onehunga railway station (the first of the trains will be running from there, tomorrow onwards) and joined a merry bunch of wannabe 'firsties,' so that they can say--'I was there on that auspicious occasion.' The flash new ticketing system that should dispel tickets if one does not have a HOP card didn't work as it had run out of paper, like the proverbial dunny. The nice conductor of the train we travelled on to town (Yes the old 1980's versions we purchased from Aussie--they love to give us their hand-me- downs when they aren't bowling underarm!) told us not to worry. Wow---a freebie.
Our fellow and felowess travelling companions were all in the same frame of mind as us; just happy to be out and about on a gorgeous day and ready to sample the 'travel of the future.' People 'talked to one another; no hiding behind Kindles (I wouldn't have minded if they were reading Roskill!) or newspapers. There was an air of expectancy and as we neared the delightfully lit up Britomart station in the centre of the city we all felt like we were old friends. NO---we were not all oldies. The passengers represented a great cross-section of who and what Auckland is now; kids, teens, parents and the much excited oldies, from every imaginable ethnic group. We were united in our desire to experience what we have lacked for so long in our fair 'city of sails'.
As we disembarked form the rattly old, smelly carriage, we set out eyes on the shiny new slimline train. They looked magnificent.
People took pictures and girls dressed in garish blue were giving out lollies. There was a real party atmosphere and even though we had to line up for our wrist bands, which designated when we would be travelling the short distance to Newmarket, finding out that we had more than an hour to wait, our mood stayed like that of kids waiting to open their Xmas presents.
We wandered around for that time, consuming the free food and drink before finally, we were called to the gates--well they were human gates, dressed as those bars that protect cars at railway crossings. The new small of the carriages and the long view down the entire length of the three carriages struck me straight away. The middle one was especially designed to allow easy wheelchair entry.
Once the train was underway, the first thing we noticed was the silence---what difference from the old ones. I bet the people living near the railway tracks will be happy!
As we emerged form the underground part of the journey, the driver (is that what they are called or is there a new PC name?) put his foot down. We could feel then power of the new engines and we were told that they are pretty fast by NZ standards, not that they will bet much of a chance to go much over 100 kilometres per hour as stations soon appear, making for a fast slow-down. That slowing -down process actually feeds power back into the system, making a saving of 20%.
In our part of the train, we had the privilege of the mayor's company. Earlier on we had witnessed the usual 'protestors with signs, decrying the Mayor for his recent 'transgressions.' Sorry folks, I am not one who casts stones at him---move on and yes, I know I have lost a certain sector of my readers for actually saying what I just said. To make matters worse, I had my picture taken  with my arm around him. So shoot me! He was in a great mood and I don't blame him, [plus we heard him saying that he knew about a petition from Pukekohe residents who want the service (Electric) to be extended to that big town. He said that they needed two or three more trains before that can happen, so Pukekohe people---put the pressure on!
Our short 'return' journey to New market and back was over all too quickly. We all clapped, having partaken in a little bit of 'people history,' promising ourselves to use these cool new trains in the very near future.
What a neat way of spending a day. Call us kids or whatever else you wish, especially for me getting cuddly with the Mayor, but for me-----lets do it again---the train ride that is, but a much  longer one next time! 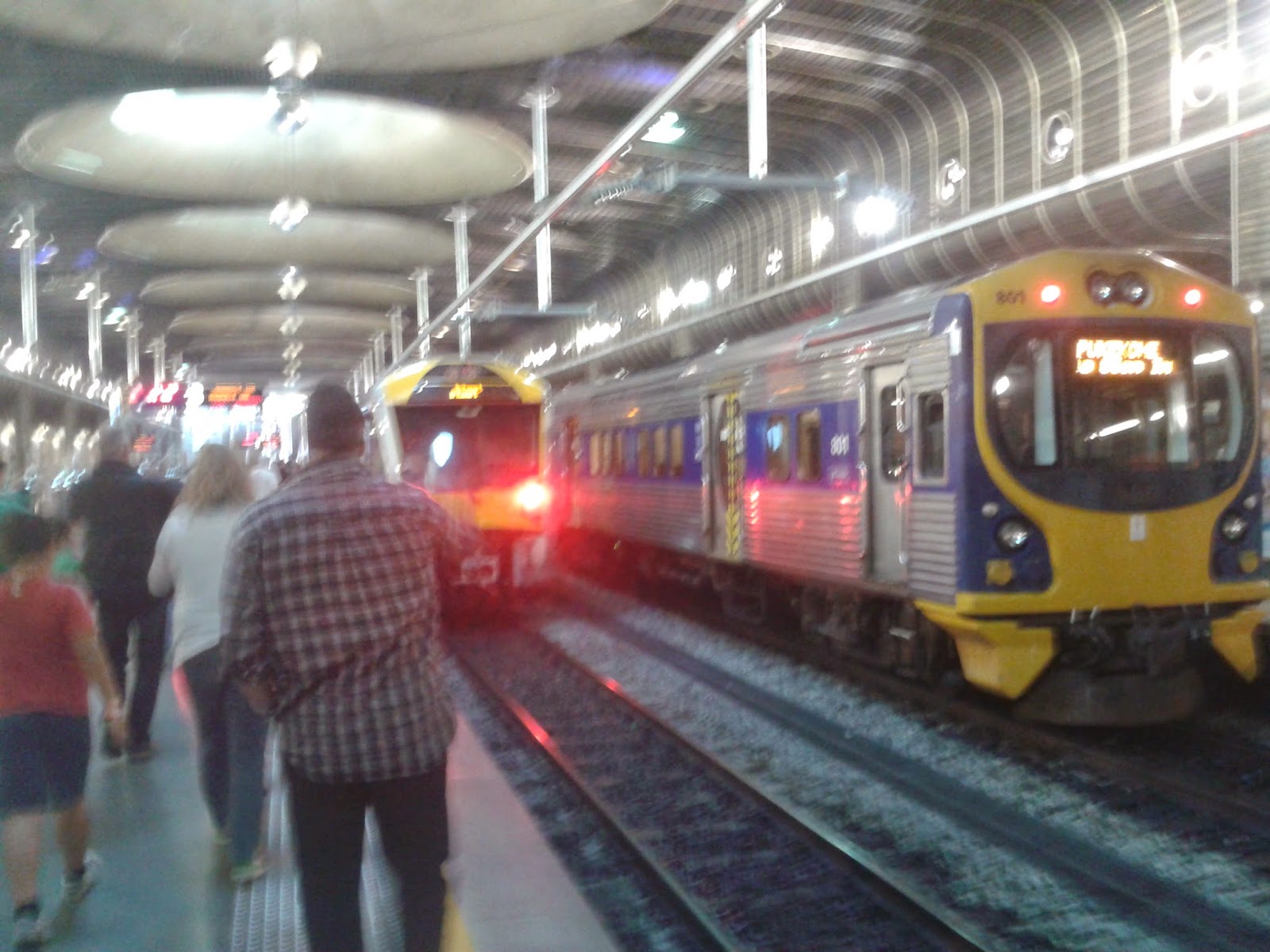 The new ones on the left. 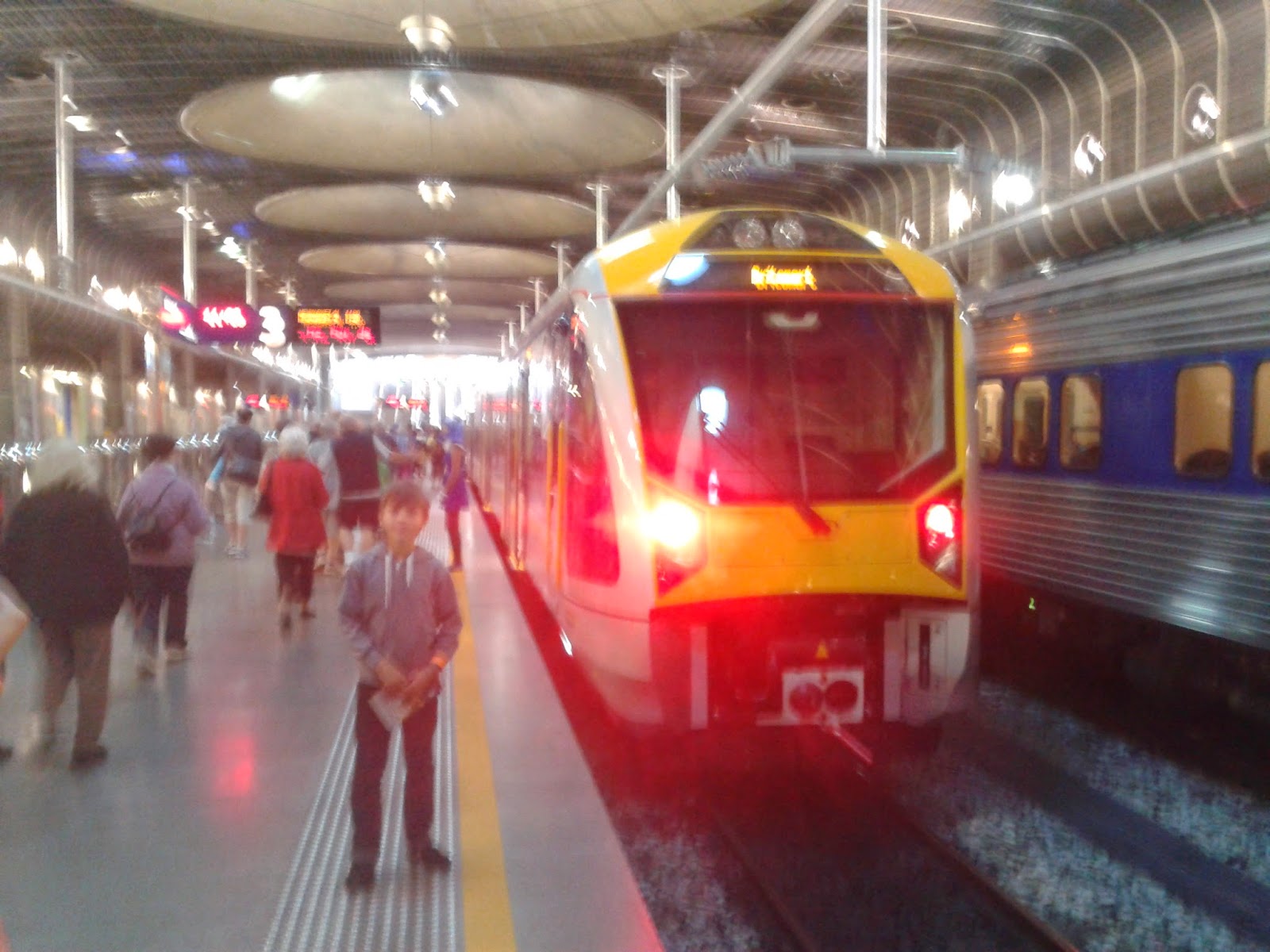 Can't wait to get on! 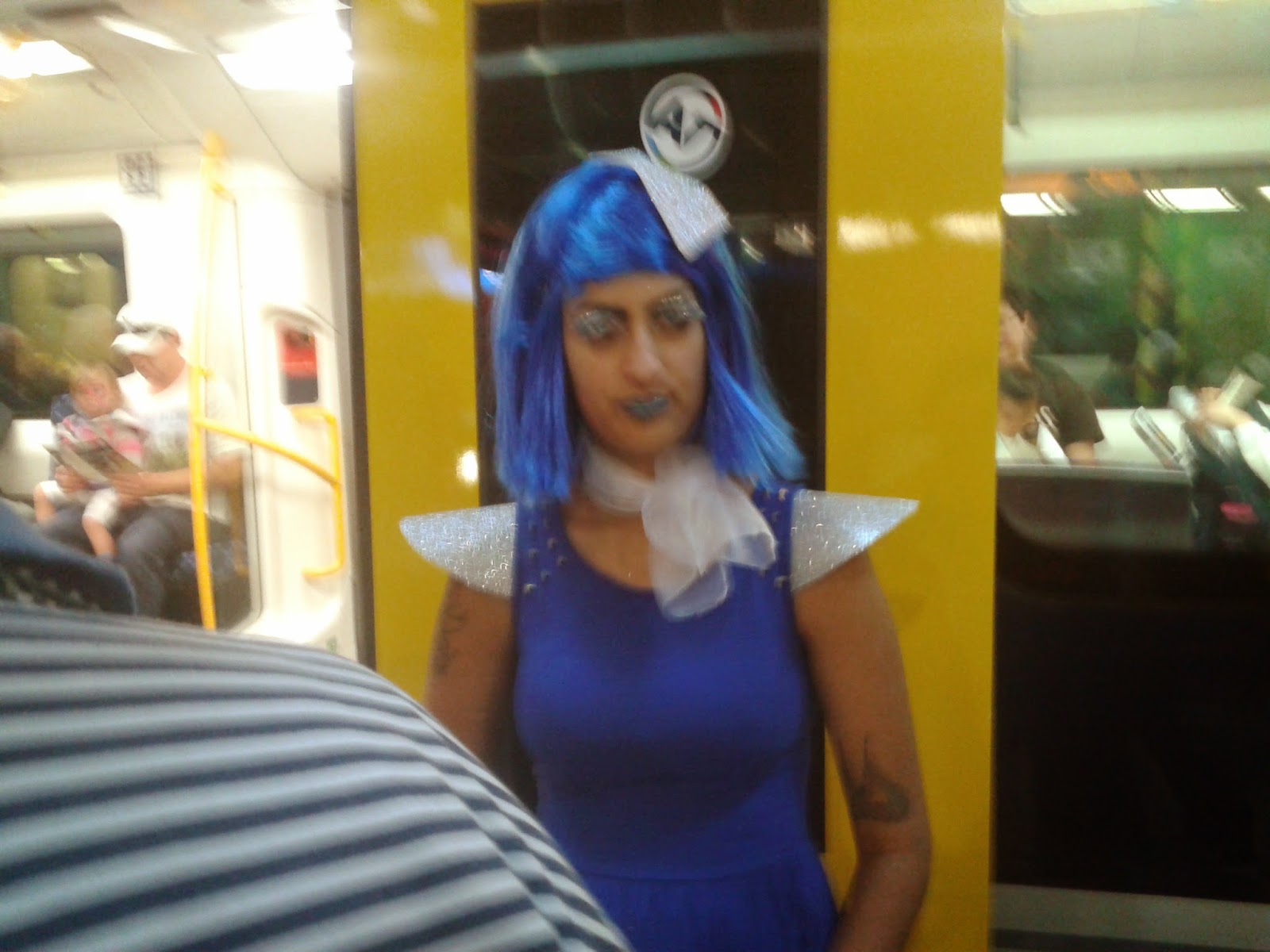 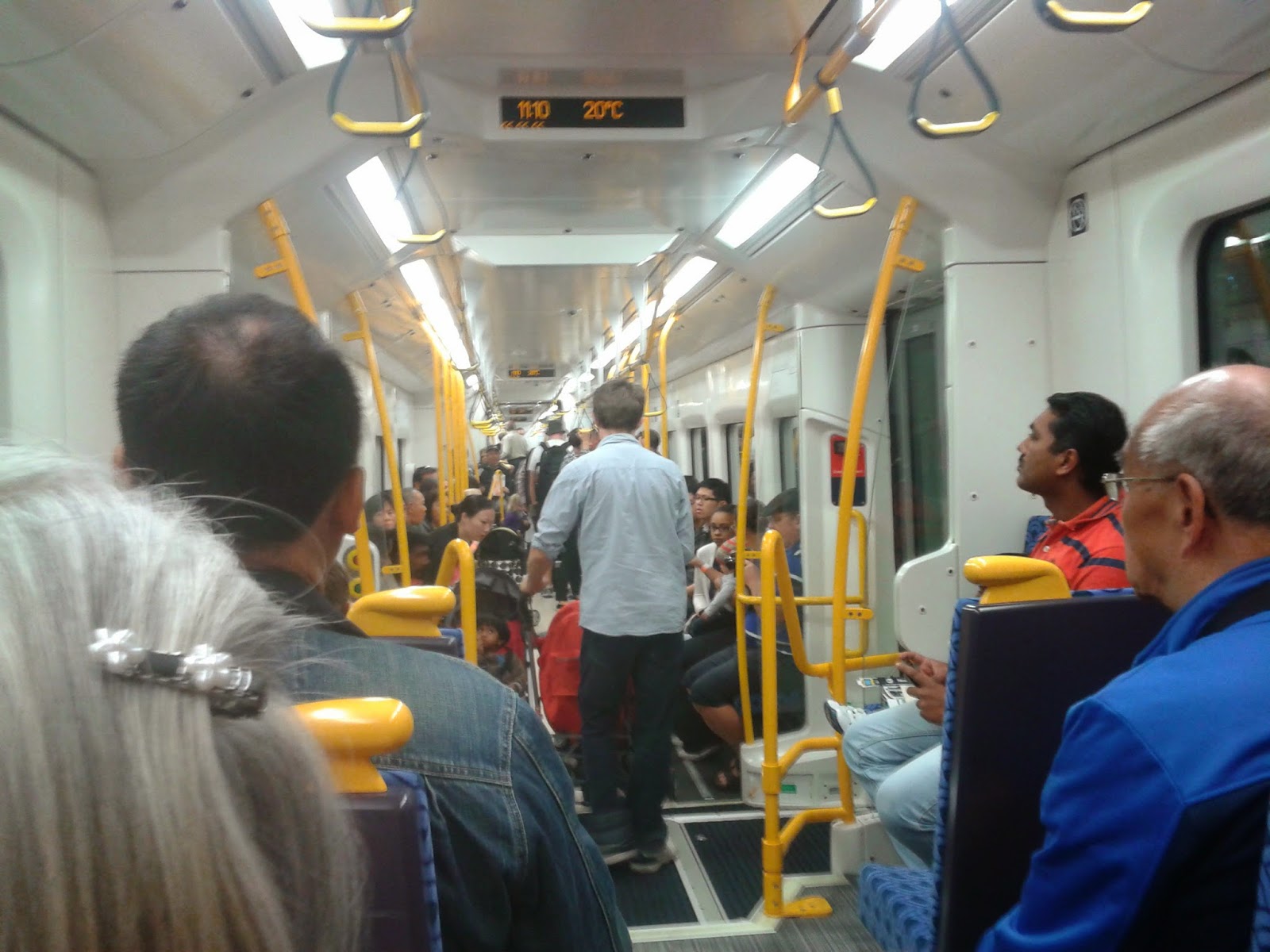 You can see from end to end. 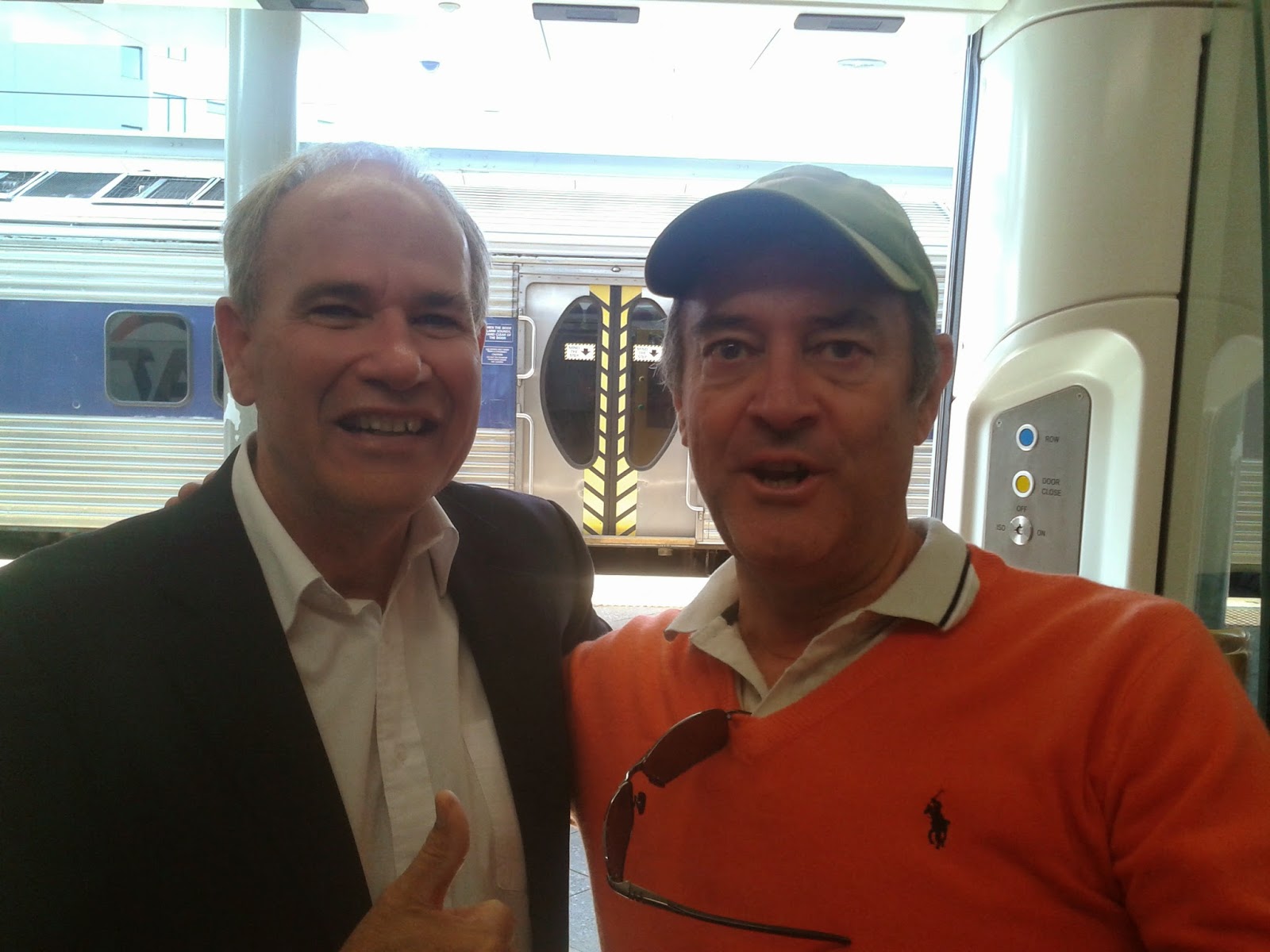 Cuddling up with Len Brown, the Mayor--so what---I like him!

Posted by www.authorneilcoleman.com at 9:23 PM