Perdy is a spy----please don't tell the GCSB!

Last weekend I took Perdy for a walk at Devonport. After a delicious (yes small) breakfast we decided to walk along the 'promenade' (That sounds so special, ain't it!) towards the Devonport Naval Base, the premier location for our tiny Navy. Perdy had an ulterior motive. I didn't know until I came home and found the camera on her collar. She had been bugged and unknowingly I had assisted her in spying on the naval base. I found the invoices in her account that pointed to a foreign power involved . She had been paid three hundred cans of the best dog food and a years supply of chicken necks. No wonder the Aussie Butcher hadn't charged me last time. Obviously she had rang them and made sure she had an account ready for action.
I am torn between the love of my country and the need to keep our naval base secret (of course it is in the middle of the harbour, right by the ferry lanes!) and not have information passed to the enemies of New Zealand. There is a rumour that tiny Tonga is about to invade us because we have been very cruel to them about a certain plane that they had been given by China and that New Zealand claims is unsafe. So you can understand that New Zealand is most worried about security at the moment!
I know Perdy is a dog, but she doesn't see herself that way. She does however have a perchance for all things gastronomic so the stomach is far more important than mere loyalty to the country of her birth. Imagine the confused feelings I now harbour given this extremely serious state of affairs. What to do?! Turn her in or wait until there is a knock on our door in the middle of the night and we are both bundled into a van and taken  to GCSB headquarters. Oh well, maybe I should be more careful about Perdy's activities during our mnay walks. God alone knows what she has planned!
www.authorneilcoleman.com 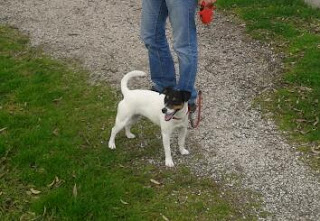 Perdy, 'scanning' the BASE!
Posted by www.authorneilcoleman.com at 9:49 PM