All that glitters is not always gold on the 'Coast.'

The Thames area has a long association with gold. Indeed, Thames was once the second biggest 'city,' in NZ, ranking after Dunedin and bigger than Auckland in the ealry 1870s. It had a reputation rivalling Russell in the far north, re it's many 'houses of 'ill-repute,' and for the sheer umber of such establishments. (I have heard figures as high as 90!). Of course once the gold became harder to extract (the gold had to be extracted by separating it from the rocks, involving massive stamping batteries and the use of toxic chemicals) unlike the nuggets that were found on the west coast of the South Island. The gold is said to be still there in the hills behind the town, but hopefully it will stay there, leaving the forest to retain that special character that we all love.

There is of course another aspect to the 'forest,' that has a history all of it's own. The remnants of that association remain, but in much reduced numbers---the mighty Kauri. The timbers of this incredible tree were much in demand and it did not take long to deplete the once glorious forests that festooned the peninsula. Associated with the Kauri was another industry--the Kauri Gum'gold rush,' that was even stronger in the far north of New Zealand.

That industry slid into history along with the gold, and the timber extraction 'cousins;' all three contributing to the development or 'plunder,' depending on your world view, of the area. Once again, there are remnants of those times. They wash up on to the beaches of the Coast, and it is the examples of these, that I love to find. I feel like I have come across little treasures when my eyes latch on to the golden delights.
One must learn to distinguish between the quartz-like rocks and the Kauri gum, ascertaining at a glance the differences. One can kick, receiving a message that the 'sighted piece,' is lighter and therefore not a rock, or use the 'colour clues,' that are not always reliable. Timing for the search is important, and now I am entering the realms of secrecy. Hell--if I spill all of the hard come by secrets of the search, then I will be diminishing the supply of my new obsession and possibly endangering my 'apprenticeship' towards gaining 'localism status,' down here on the Coast! 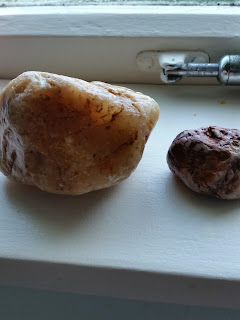 gum---the piece I collected from my 'source today.  ENJOY! OK---the one on the left is the Kauri gum and the other, a nice rock that will find it's way into one of my 'polishers.'
Posted by www.authorneilcoleman.com at 2:56 PM