Obama plays golf with Key in Hawaii. 'Asset-selling' Key has little in common with Obama.

I wonder what Key and Obama talk about during their gold playing sojourn in Hawaii. Let's face it, they probably have little in common ideologically. I am sure that Obama isn't an asset-selling' majordomo and  probably has differing views on public health or education. But---who knows. The Democrats are not necessarily aligned closely with the left of politics any more, despite what Fox TV and the Republicans would have us believe. At best (and I have to admit that it is a good one) it is a publicity seeking stunt on the part of Key and a 'pleasant little side-act' for Obama. That the two get together is in itself sends messages about where the relationship between NZ and the USA is going and that is not bad in my view. We need to keep our options open re relationships with all countries and despite some of my more base thoughts about Key, I do not try to portray the meeting as an attempt to garner political advantage alone---yeah right! Is that trade deal with the USA any closer, Mr Key? Did Obama put some subtle pressure on you re our closer ties with China et al? Perhaps he can put in a good word for you re a 'Green Card,' come later in the year!
www.authorneilcoleman.com 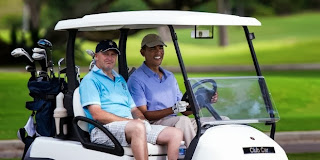 Posted by www.authorneilcoleman.com at 3:38 PM