My friend in Grey Lynn rang me today. He has one of those old villas that I love, with a magnificent view towards Sky Tower---you know---a place that's great to be on New Years Eve---no crowds and no fuss, just a view of the fire works that is wonderful.
He was under his house looking for God knows what and he found these newspapers with a dinner set wrapped up. The papers were dated from 1987, so I sort of guessed what was in them. He said some were chipped but most were OK and he said he would bring them around to me. I happily agreed and we were a bit down at our p[lace so this was a lft. My partners dad in Indonesia had a stroke last night so we were busy trying to get some money together to pay for the hosiptal over there. It ain't free like here. 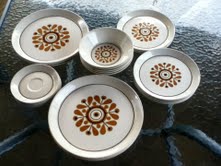 When we arrived back from Western Union, there on the table was the dinner set --I would say its from the 70's or 80's--very retro Crown Lynn. I was going to sell it, but no, I am going to use it, along with all the other CL I have. It's much better than the crap coming in to New Zealand now and so very much----New Zealand.
Posted by www.authorneilcoleman.com at 8:29 PM