I love taking Perdy to the beach and when I get a chance to indulge in my other great love/passion/addiction; call it what you want, I am indeed happy. Look at the picture of the beach. No wonder all of the walkers, with or without dogs were smiling all the time.
We went about 9am, hoping that the tide was out enough to avoid the crowding that can occur when there is a narrow patch of sand for the walkers and dogs to share. Apparently, it has become an issue at times. There was plenty of room for the dozens of dogs and their humans.
As soon as we hit the beach, I let Perdy off. She initially kept jumping at me looking for her ball, but I had decided that today she could run and meet the other dogs for a change, rather than be fixated on the ball. It didn’t take long for her to catch on---- she was off to meet new friends, of both kinds. Perdy has this unshakable belief that most dogs and humans will love her--- she is correct in that assumption. She was also by far the most ‘energetic’ dog on the beach.
She ran, sniffed, jumped, explored and did the odd poo (yes I picked it up). I noticed that she wanted to chase sticks that other people had thrown for their dogs and she kept looking at me as if to say—‘come-on you lazy bugger--- throw one for me!
I picked up one that should have been far too big for her and threw it into the gentle surf. Perdy had not been in anything more and a few centimetres, so I was curious to see how she would handle the little waves. Surprise surprise--- she jumped over the wave, retrieved the stick and plopped it by me on the sand and then jumped back into the water and I swear she was using the waves like a body surfer. Somehow I think she will want to try something a bit bigger next time.
People laughed at the sight of a little Jack Russell, ruining along the beach with a stick that was longer then her. It looked hilarious. My camera is on the blink so I didn’t get pictures of her until later at the café.
The TAKAPUNA BEACH CAFÉ AND SHOP has to have one of the best urban views in New Zealand. The long sweeping beach with Rangitoto Island and the Hauraki Gulf providing a wonderful backdrop is a sight to calm even the most frazzled nerves. The café is positioned only a few metres from the boat ramp and beach.
We should have waited to be seated, but we didn’t see the sign so we plonked ourselves down at the first outside table that became available. (I think that the sign applied to the seat inside--- well that’s what I want to think). A waiter appeared and we ordered coffee. It was Alpress coffee, one that I always enjoy. When the friendly, immaculately dressed waiter brought our coffees, we placed our orders. Perdy had settled down to shiver under the table, but I made sure that she had the sun warming her. She was way too absorbed in observing the other dogs and the business of the café to worry about mundane things like being cold---she was still a little wet from her swim.
It was then that I notice the linen napkins and better quality cutlery. This café is not at the lower-end of the market. The prices reflect that too. It was when we surveyed the menu that we realized why. Don’t expect the usual bacon, eggs and ‘big breakfast’ type offerings. The menu is far more varied and quite exotic.
I chose a smoked snapper hash, topped with a beautiful freshly made green concoction, one organic poached egg and pancetta. It came with a pea relish. The overall affect was almost spectacular. It was a bit more expensive than our usual breakfasts, but you won’t hear me complaining.
My sister ordered Moroccan eggs, baked with other goodies. (They had gluten free bread—always a plus with us) She was delighted and made it clear that she would like to try the luncheon menu next time. We were both more than satisfied with the ambiance, the quality of the service and food and the fact that we could have Perdy with us. There was a bowl of water in the corner that they regularly replenished.
General MacArthur once said----We will return. We won’t need to be in a conquering mood though.

The View from the cafe. 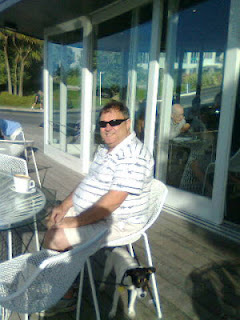 Perdy sitting under 'His Highness.' The chair did not collapse. 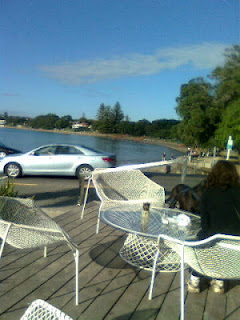 Posted by www.authorneilcoleman.com at 5:03 PM