A ‘dogs tail.’
“Stop pulling, Perdy! Damn … I can’t see where we’re going.”
Cheeky birdsong faded as we pushed deeper into the mine, a cloistered shaft full of faded dreams and songs sung by the dead and desperate. Maybe they were laughing at me, presuming that I too desired the wealth of times gone.
I stumbled as my foot hit a rock, sitting dead-centre in the narrowing tunnel. ‘Bugger … that hurt!”
Perdy looked at me, her eyes barely visible in the diminishing light. My torch held precariously in one hand, and the leash in the other, flickered, casting dancing shadows on the walls.
I shuddered. Should I turn back? “Nothing broken, girl. Kinda creepy in here though.”
Perdy’s tail was hiding between her hind-legs, a sure sign that she wasn’t happy. Her little face was transfixed on something just beyond the reach of the weak torch-light. She sat, refusing to move.
“Come on … I want to get to the end. There’s nothing to be worried about.”
Perdy started growling … that low ‘big-dog’ sound she employs when she’s made up her mind that I need to reconsider my plans. Then I felt it. A cloying smell, drifting from the interior of the tunnel … and an eerie half-light, dancing, reflecting off the quartz-studded walls.
A large rock fell from the low roof of the tunnel, causing me to jump back. I banged my head on the wall. The odour intensified, while the light began to diminish. My heart almost synchronized with the flicker.
Perdy made the decision to start pulling me … back towards the entrance. I followed, casting my eyes back. The birdsong was gone when we tumbled out of the tunnel.


“How about a beach-walk, next time, girl! Maybe 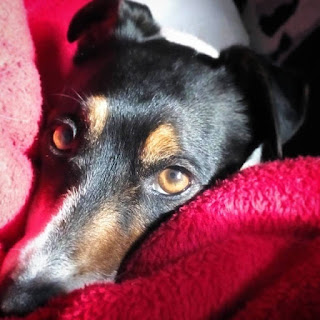 the beach can tell us some stories, eh.”
Posted by www.authorneilcoleman.com at 2:36 PM