There is a very fine line between love and hate. Both emotions are felt strongly, affecting us in so many ways. One can be up, one moment and then down in the dumps, the next. Such is my relationship----with Talkback radio.
I have often used it as a 'background,' whilst driving, doing housework (OK---the latter ---not so much, as housework is a waste of time at my place when it inevitably gets 'done again' by a partner who refuses to pass my paltry efforts as being 'good enough.' Sometimes, there is a 'thread,' re the conversation and I turn up the volume, only to be dumped, angered, entertained, but rarely 'enlightened.'
The 'wisdom' exhibited by the callers is mind-blowing, not because of the level of so-called knowledge, but more from how it represents the level that our collective knowldge has sunken to. Throw in the 'taunting' and somewhat manipulative approach from the various 'hosts' (They vary re their arrogance!) and you have a hotchpotch of all that is talkback radio.
One needs to decide BEFORE embarking on a 'listening experience,' between taking talkback radio as entertainment, or as an example of an 'informed debate, led by a sympathetic and inclusive host. I think that last part of the previous sentence almost has me throwing up!
OK---I admit to experiencing the occasional well-informed contribution and sensitive response and questioning from the hosts, but in general, I see talkback radio as being no more than a reflection of just how diverse our opinions and stances are re various issues. That is fine, but when such views are expressed via talkback radio, they are underlined by the fact that the radio stations are in this for one reason only---to get listeners and therefore to bring in the 'advertising dollar.'
A host can be skilful, in 'keeping a 'thread going,' by playing the Devil's Advocate.' Hell---some even admit that. But then there are others who consistently come from a 'particular point of view,' being dismissive of anything that goes against their 'held view.'
I am sure those of you who lsiten to talkback radio, have your favourite hosts. You probably save YOUR contributions for that time when your favourite is on the radio,  that is if you are brave enough to ring up and let loose.
My 'fascination' and viewpoint on the 'talkback radio industry,' led me to write a book about how I see things, albeit in a cynical, humorous (maybe not!) and OK---a 'take-the-piss' kind of manner. I  included another aspect of my life in the book---my attachment' to my crazy Jack Russell. I did not intend TALK TO ME to be a serious expose of the talkback radio industry because I do not have that knowledge, but nevertheless, some aspects, hidden in the narrative, do come through.
Imagine my surprise, when I heard that TALK TO ME has been nominated for the Ngaio Marsh Crime Writers Awards. It is up against books that are far more complex and skillfully written. My efforts were nothing more than to entertain, with a little bit of a swipe at the 'industry.' Spot (Perdy--of Tararu/Thames fame) plays a central role--a fun role. I get my chance to discuss the book at the 'Murder in The Library,' series at the Tauranga Library on June 8th at 5.30. Feel free to join me.
You can read it by going to my website and following the links from Neils Books. Hell, if I get enough downloads from the site--at about $3 a shot) I may be able to afford to bring it out in hard copy and sell it at the various venues, alongside ROSKILL, in the Thames/Hairaki area. Go and check it out.
If  not---well---you always have talkback radio to fall back on to be 'informed, misinformed, entertained and totally--pissed off!~
www.authorneilcoleman.com 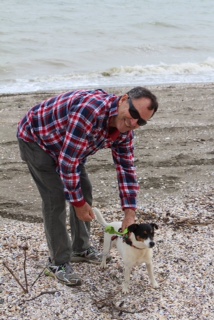 Perdy (Spot--in Talk To Me)
Posted by www.authorneilcoleman.com at 3:06 PM