'What goes around, comes around'--a strange take on that old saying.

I think I got my butt kicked today, by forces beyond my understanding. My first take on the experience was perhaps a little over the top but the consequences may be a lesson in humility.
On the way home from Orewa Beach today; where I had taken Perdy for a run, I decided to extend her pleasure and go down to the Bay, our beloved Onehunga Bay, home to the 'Dog lovers of the said Bay.'
Perdy showed no sign of being tired after her northerly jaunt. She bounced out of the car and chased the ball that I had biffed onto the sand. DAMN, I didn't see the dog, owned by a gentleman who has little control over the said beast; that is if it decided that a ball thrown somewhere in its vicinity  belongs to 'HIM.'
Too late---he pounced on the orange ball and sat in the water. I sat down calmly at first and looked to see if his beloved owner would retrieve the bright ball. Silly me. He ignored us. I got off by butt and approached him, remembering the last occasion when this had happened and knowing that I was about to lose about half an hour of time to the whims of this silly dog and 'unusually dispositional' owner.'
'Could you please retrieve my ball?' I pleaded in a voice that oozed a possible distain towards his selfish dog.
'I will call him,' he replied.
Yeah right, I thought. Now began the saga I had experienced and witnessed for other hapless owners of balls that the dog 'liked.'
Eventually the guy also got off his butt and went to his car where he retrieved a red ball, that he assured me would entice his dog to drop my ball. NO SUCH LUCK! The dog continued to mash the orange ball in his mouth and when the guy threw his red  and yes, inferior ball, his dog ignored it. Why the hell would he give up my quality orange ball?
'Can you not just take the dammed ball from him?' I inquired in a tone that he possibly took offence at.
'Oh no,' he replied, 'That would make him angry. I don't want to upset him.'
WTF, I thought. It's a bloody dog, not a kid with 'issues.'
Perdy, in the meantime watched patiently and just wandered around, sending me the odd look that said, 'It's OK Daddy.'
NO---it's not good enough I thought. This guy has no control over his dog. Hell, one of the first things I did with Perdy when she was young was to make sure she didn't bite. To achieve that I made sure she was OK with me taking things from her mouth, even food. She learned well, but I guess, to be fair, she is a Jack Russell and not a huge German Sheppard!
Thirty minutes passed and my mood slowly soured and started to border on the 'angry.'
Finally the dog dropped the ball and it rolled under the picnic table where his owner was sitting. I yelled--'Hold that dog!'
In as much as my movement could be called a 'run,' that is what I attempted to emulate. I retrieved my orange ball and moved off quickly and called out---'please learn to control your dog,' and headed towards the far end of the park. A prickly sensation coursed down my spine. Had I been unnecessarily cruel to the guy?
A few minutes later I came across one of my friends with her darling Finn, one of Perdy's 'best friends forever. I recounted my story to her and she assured me that I was NOT being unreasonable re my response to the owner of the ball thief. By now the sky was clouding over a little more and my sense of unease increased. I threw the just retrieved ball and 'walked on,' leaving Perdy to chase after it. Silly me---that was my last sight of that ball. It disappeared into the cosmos that is Onehunga bay. No amount of searching and retracing our steps brought that ball back.
I was being punished for my mean and nasty reaction to a simple lost ball and being a little impolite to the owner of the large German Shepard. After all, it was only a ball! Is it true then--'What goes around comes around,' or is Onehunga bay the centre of a 'spiritual learning.' Maybe I should buy a blue ball then! But, most definitely I shall stay well clear of the big German Sheppard and his quietly spoken daddy. 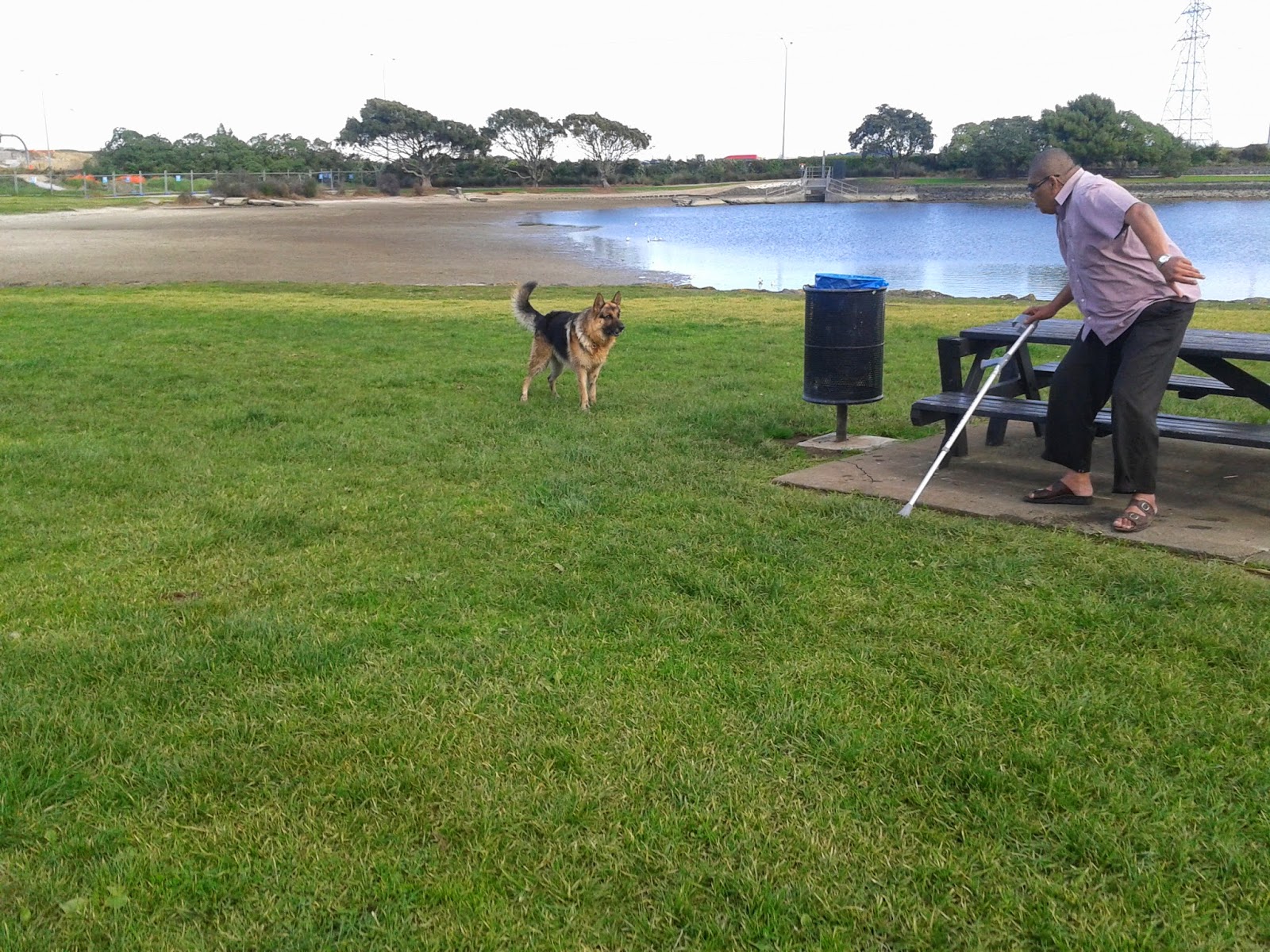 Please give me our ball back, 'nice doggie!'
Posted by www.authorneilcoleman.com at 9:33 PM