Pukeko Heaven for a Jack Russell--on a leash!

I spent the day ion Hamilton, the home of the England loss to NZ as thus giving us a clean sweep of the Rugby test series. NO, I didn't go the 'sold-out'' act; it was more about the family, siblings and a dear cousin. We took the two dogs and did our usual thing; cooking up a great feed. We did a 'repeat' of a recipe using schnitzel coated in herbed breadcrumbs with a second cooking using the grill with mustard and cheese. I only ate a small portion, even giving Perdy some.
Between courses (yes, we had a gluten-free sticky date pudding with caramel sauce and whipped cream) we took a quick trip to the lake in the m idle of Hamilton, where it is possibly to walk right around the edge on a lovely path, but today we decided to walk 20 minutes one way and then turn back.
From the moment Perdy jumped out of the car, thank God, on a leash, she noticed that there was an abundance of Pukeko and other water-birds. Her face ;lit up as she begged me to let her go!----yeah  right, Miss Perdy--you want me to get arrested by the Hamiltonian law enforcement agents--I mean my fellow dog walkers here looked a bit sideways at the black and white Taliban member!  Not on---girlfriend!
I swear that Perdy felt like she weighed in at about three times her 7-5 kilos! She jumped and pulled and did her best to break away to attack the 'blue water rats----- birdie versions.' She was pissed of---who the hell was I to keep her away from a sight that she had never before set her eyes upon. Those cheeky birds damn well knew that Perdy couldn't get to them and they squawked their distain at the 'terrorist' in their near midst.
For the entire walk, Perdy did not give up her struggle to 'get at her enemies.' How dare 'me,' someone who is supposed to love he, torture her with such a 'negation of her freedom to move.' Hell, is that not a basic doggie right under special 'United nations regulations?'
NO amount of explanation could convince Perdy that I was doing this for her. Did she not see that the Pukekos she saw, were just the 'vanguard' of the army of birds, egging her on, in the knowledge that just beyond her sight, there awaited hundreds of 'others' ready to flap their way and peck her into a place she would not like---death! Those birds are fierce; determined to defend their territory and families and one Jack Russell, no matter how big her ego, was not going to make a dent in their empire!
OH well, Perdy---another time, another day---you will be back!---with 'reinforcements! The score today?----Hamilton Pukeko Empire'---- 1---Perdy nil. Such is the life of a frustrated Jack Russell. No doubt she will re-live the battle in her dreams, moaning and twitching as she usually does after a 'plentiful day.'
www.authorneilcoleman.com 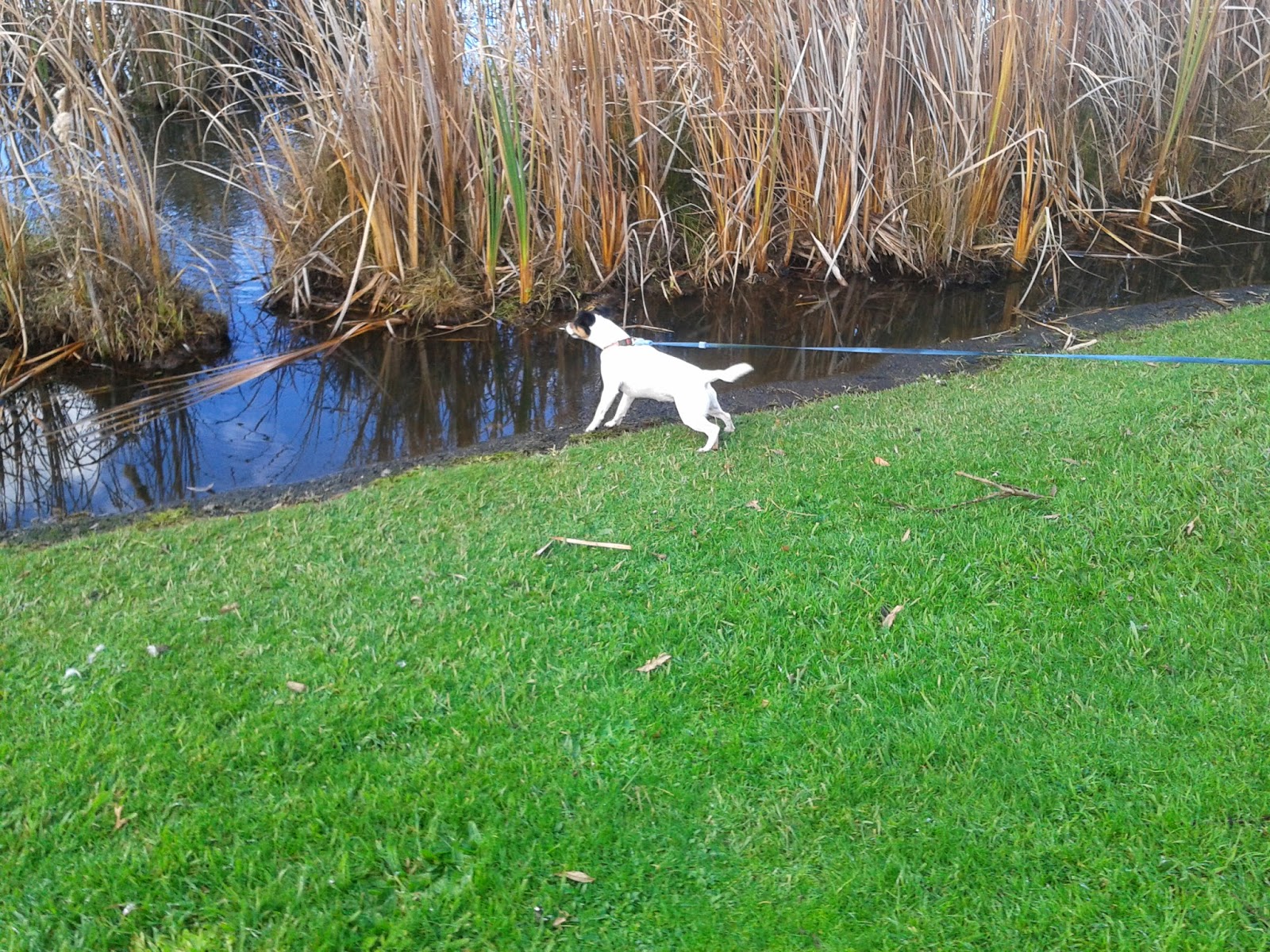 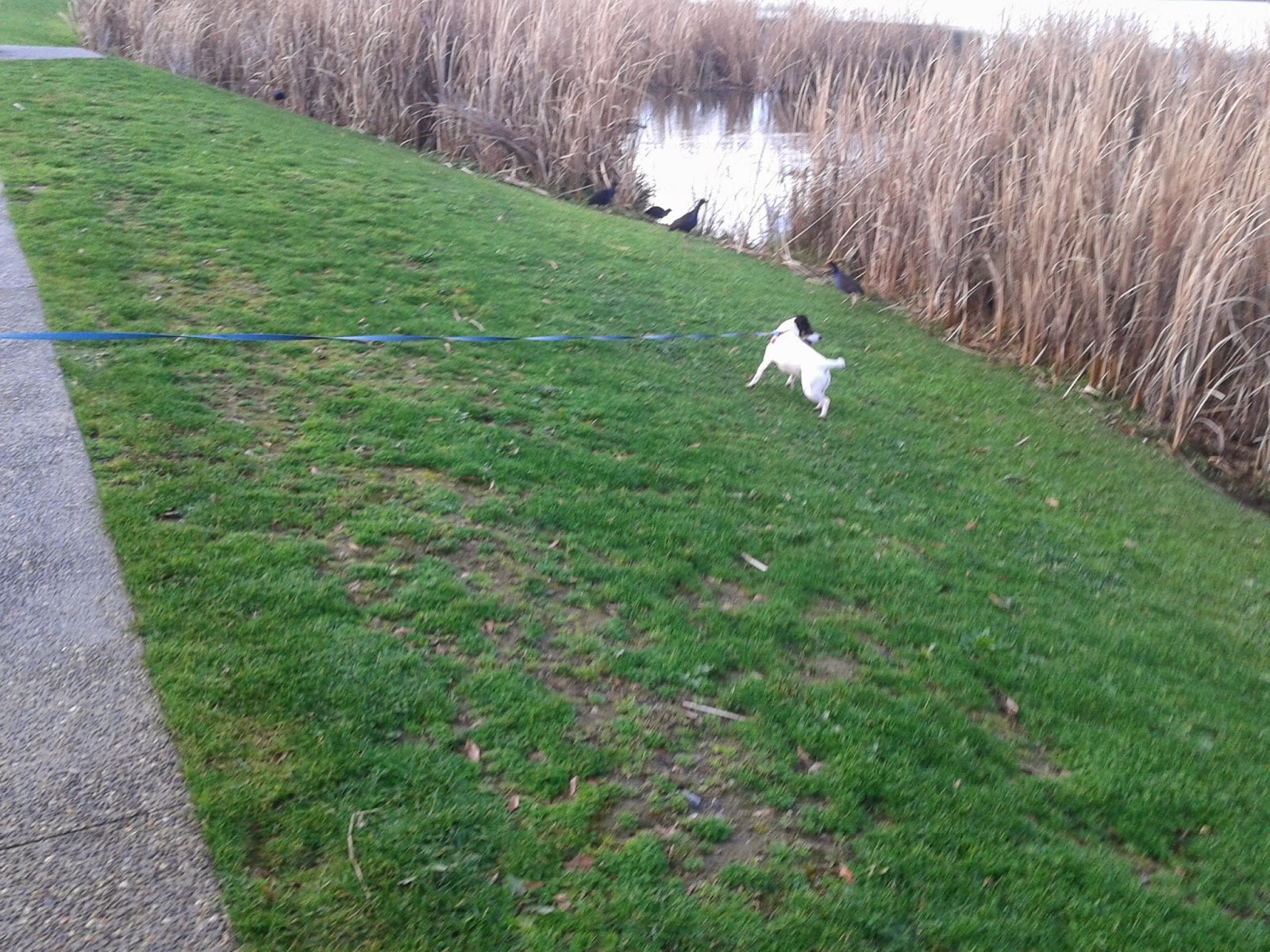 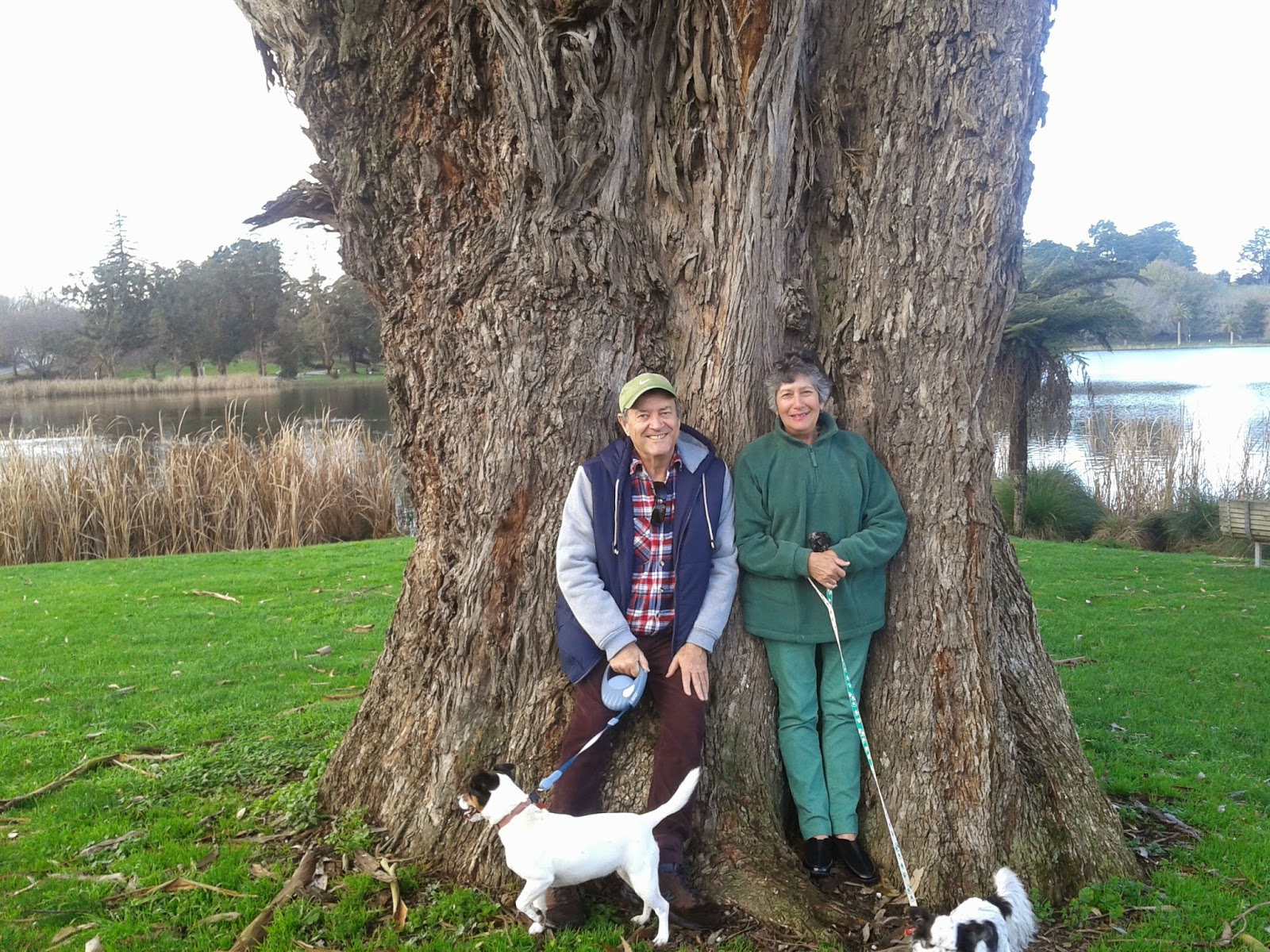 Peace has settled upon the lake. Cousin Barbara and I try to hide from the pukekos, but guess who is not convinced!
Posted by www.authorneilcoleman.com at 3:38 PM