I intimated that I would make this posting; my solar oven cooked brownies(I called them muffins in the pervious post). I had meant to cook some chocolate-dewberry muffins but I don't think that I can cook cakes as such, unless the product is more like a dessert, so I thought that the consistency of a brownie might be more to the capabilities of the oven. The problem is that it is hard to get a dry heat when moisture is given off in the oven. I know now that it will cook chicken well, given the right conditions and that it will dry (as long as I let the moisture out through a vent) tomatoes, and other fruits and herbs. But I do not think that it will cook a fluffy cake or sponge. The result is 'heavier,' hence my belief that it will cook brownies. Of course anyone knowing me well, knows that I read a recipe and tend to ignore it! I do my own thing, with quite varying results, some of which don't warrant 'telling.' My 'Brownie recipe worked well, if you believe that the outside should be sort of crunchy and the middle---well--- berry-melting delicious. If you want he recipe--just ask. Get a solar oven first though or buy mine for a million dollars! Once again. let the pictures speak for themselves! read ROSKILL to get some other ideas of my little idiosyncrasies, re cooking. Just download it on Kindle from my website.
www.authorneilcoleman.com 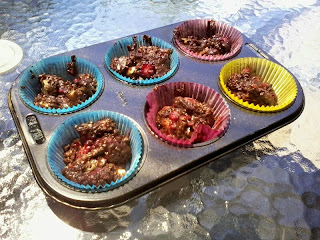 Ready to go into the solar oven. 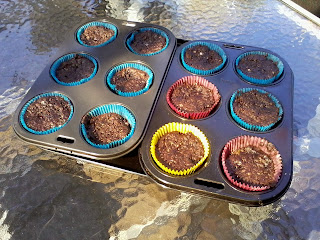 They really do have the consistency of Brownies.  Bloody yummy!
Posted by www.authorneilcoleman.com at 7:30 PM