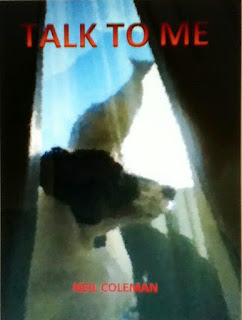 SYNOPSIS FOR    TALK TO ME.
The world of talk-back radio is a fickle one. The ratings can make or break the station broadcasting the show. Personalities are involved and back room money crunchers rule.
What happens when less than scrupulous managers employ some shady tactics to boost the ratings?
Gary is a popular host and has difficulty confining himself to the rules of the station. He balances his stressful life by walking his dog, Spot, a cunning Jack Russell, at a local park. He is friendly with a group of fellow ‘walkers.’
A scheme is hatched by the managers and Garry is soon in the middle of a cat and mouse battle between a dubious character with his own agenda, who rings in to the talk back show to taunt Garry while he is on air. Things get way out of hand.
You will laugh--- you will be frustrated--- you will be angry, probably enough to ring in some poor bugger doing his job in the real world, so I apologize in advance to all the hard working talk-back hosts.
The story is a tongue –in-cheek; take the piss exposé of an unreal world. Unfortunately it has a ring of truth in it too.
Look for the first chapter on my blog.
While you are at it, read the first chapter of ‘The River Always Flows.’

Don’t forget to click on the adverts. That is how I am going finance my books.
Thanks
Neil Coleman
neilcolemanauthor@gmail.com

Posted by www.authorneilcoleman.com at 9:52 PM