Ireland to England and beyond ... a story that is still ...resounding.

An Irish lad seeks new horizons, His sense of adventure is enhanced by an impossible 'present.'
Jack, a young man struggling with his identity, his emerging 'manhood,' and a desire to find a better life.
Join him on his adventures, sometimes heart-rending, funny the next and outright dangerous at times as he takes a huge leap of faith to reach across the globe.
Sons of Orpheus is a story based on fact, several ships, one naval and a tool of the expanding British Empire, and the other ... commercial in nature.
New Zealand in the 1860s ... a struggle between two peoples, one trying to keep its sacred land, the other ... desiring land for settlers, which it had signed a Treaty that was supposed to protect Taonga, forests and lands from being taken.  New Zealand was at the crossroads of history.
What part would Jack play?
Sons of Orpheus (Book 1 ... The Arrival, by Neil Coleman) is available on Amazon Kindle or any device (APP store for Apple and Play Store for Android) with the free Kindle App. Install the free APP and search for the book. 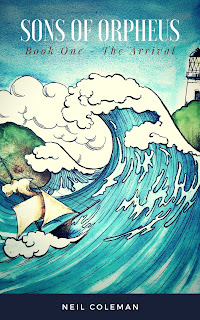 Posted by www.authorneilcoleman.com at 3:57 PM