Kia ora, Mr Putin ... I am asking in a most respectful, something quite difficult for me to do, a special favour. I was going to ask President Trump, but sadly, he is incapable of writing a letter never-lone reading one. So ... it really is up to you to come to my aid!

Now ... the issue. I have an unusually active life form living with me. This 'person' for want of a better word, has a very high energy level, demanding constant activity and 'stimulation.' Thankfully, her needs do not extend to jewellery, 'high-end clothing or top-of-the-range Teslas. No ... she is quite content as long as I do not insist on keeping her permanently 'leashed.' She loves her freedom, and let's face it ... we are both better if she is well exercised. She places fewer demands upon me!

Today began as most days do. She woke me with a lick, after performing some of her usual morning tasks ... in the bed. Yes, she likes to wash, before arising. Being an accommodating sort of guy, I give in and do not challenge these slightly 'alternate' behaviours. One has to give a little in order to keep the peace. I am sure, as ruler of one of the most powerful Kingdoms on earth, you understand such matters.
So the morning was proceeding as per normal. I was about to make my first coffee for the day and being a cold morning (That's relative, of course, in Thames, New Zealand. Cold here is a morning where the temperature is nudging 3C, not the minus 20c, you are used to!) I decided to keep the fire going. We have some dry firewood stacked by the front door, where it is easily accessible, should the box of wood beside the fire run out.

I made sure that my 'girl,' who had not completed her morning rituals, was safely inside She loves to run outside, naked, onto the road. It's in her blood. Perhaps she has a few Gypsy genes ... who knows! So I take precautions. I always make sure that I know her whereabouts if I open the front door to access the woodpile. I looked to my left (being a good Socialist!) then to my right. My girl KNOWS me so well. She darted left when I looked right and was off in a flash.

I saw this blur of whiteness (yes she is predominantly a blond) as she 'streaked' towards and then along the road. Of course, the traffic swerved to avoid her or was it so they could get a better look. She is, after all, quite a sight, first thing in the morning.

Here we go, I thought. I hope my Afibrulation doesn't kick in. That's all I needed. I yelled ... no ... pleaded for her to return to the fold. No way. She wanted to play Russian Roulette with the cars, trucks and other traffic. Yes, the traffic slowed down. They could see my predicament, and for the most part, were well acquainted with the rules of Russian Roulette. They seemed to understand that 'my girl was just 'doing her thing.'

It's at times like these, that I take a view of life where one just has to accept that some people need to be left to do their thing and trust that fate does not intervene in a tragic manner, but at some stage, after the driving force has run for a while, there is a need to take a firm hand and reign in such exuberant behaviours ... for the good of the person.

This may sound  like it is from the barnyard, but I had the help of someone else who loved this 'girl,' and together we managed to corral her in a neighbour's front yard, then when she was about to once again 'pull the trigger' in her 'Roulette,' we grabbed her and returned home, with the toots of cars and drivers, resounding in our ears.

Being the leader of a vast nation, with a long history: you have given us music, art Stalin and of course ... vodka ... perhaps you can suggest a way in which one can easily CATCH A JACK RUSSELL when she insists on playing Russian Roulette. There is no point in asking President Trump because he is way too busy with his own endless dramas!

I eagerly await your response.

PS:  My girl's name is Perdy. Here is a picture of her. 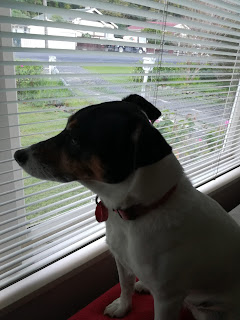 And another ... a more innocent one! 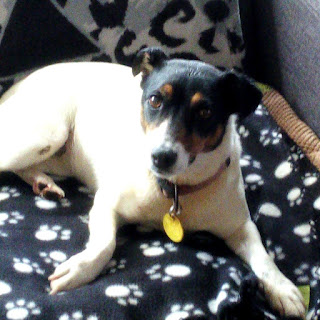 Posted by www.authorneilcoleman.com at 3:17 PM