ANOTHER pothole reminded us that small cars should slow down on metal roads. Hell ... I was crawling along and if I slowed down anymore, I'd be going backwards.
'Where's the sign? ' I said to my mate. 'The APP said the pathway is by the bridge ... oh, there's the carpark.'
I pulled off the road. 'Car park,' was pushing it. There was barely room for my car and the car that was already there. Perdy, our ebullient Jack Russell was busting to get out of the car. Her whimpering hadn't stopped since we turned down the side-road. I attached her lead and she jumped out, trying to haul me towards the bush. She wanted off, but that was a no-go. Dogs, particularly Jack Russells are not welcome in the bush ... for good reason. 'There be critters ... endangered ones,  them there hills, girl.'
Out of nowhere, a couple appeared. They approached. Perdy pulled me in their direction. 'Hi ... did you just come from the tree ... the Square Kauri?' 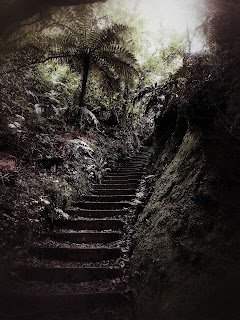 The lady answered with an English accent, one very familiar to me. A friend up the road in Tararu spoke in exactly the same variant. 'Yes ... the steps are steep but well built.'
'But where's the track?' 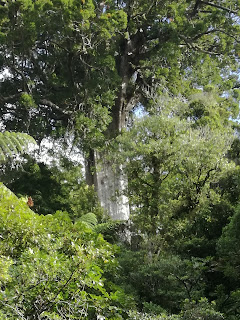 'Just past the bridge. It's well worth the short tramp,' she replied, looking at me like she doubted my ability to manage the steps. The birdsong is beautiful too.'
We chatted for a few minutes, then after they left, we headed towards the hidden track. I had an immediate sense that we were entering another world. The trees and ferns enclosed us, dripping their moisture on exposed skin, dropping the temperature a few degrees and casting an eerie light on the narrow pathway. A distant Tui called to us, interrupted by a more raucous call from an unidentified source. A large drop found its way down the back of my neck causing me to shiver.
We continued, Perdy leading the way, stopping every few seconds to sniff out unseen life-forms and to leave her 'special 'mark. About ten metres into the bush, the stairs appeared. They were well built, with metal stones filling the step-line, but a lack of handrails made for a somewhat precarious journey, given that  I was being pulled, released and pulled again by a Jack Russell that understood nothing of a steady pressure and a gentle walk.
'Jeeze, how many steps are there?' I asked, after a few seconds. I turned around. Where was my mate? Wispy tendrils of mist swirled from the canopy of ferns framing the path. My mate appeared, camera in hand. He had been taking pictures of fungi. 'Go ahead ... I'm still feeling car sick, from your driving,' he said accusingly.
I ignored the barb and continued up the next flight of steps, puffing and hoping that the tree was up ahead. We had seen it standing majestically in the bush, from the road, but the path wound its way in a manner that made me feel like it didn't want us to encroach on its special world. I took a few more steps. I seemed to be stopping every ten steps or so. 'Bugger ... I hate steps,' I muttered to the ferns. One slapped my face, punishing me for my trash-talk.
Something unnerved me. The bords had gone silent. I heard a rustling sound. So did Prdy. She pulled to the left of the path. I yanked her back. 'I ain't chasing you, girl. You get lost here and I'll have more than the Doc officers pissed off.'
I carried on, trying to ignore the growing feeling. Looking up, I noticed the patterns formed by the canopy. I heard a heavy flapping sound and a dark shadow passed overhead. Must be a Kereru, I thought, but a bloody big one, I took a few more steps. I was down to five at a time now, before taking a breath. Yet another steep section presented itself. 'Damn ... that tree better be worth it.'
I looked back. I couldn't see my mate. I felt very alone. Jack Russells don't count. 'Just a bit further.'
Perdy started barking as the shadow passed overhead. It let out a cry ... a  guttural visceral screech like nothing I had heard before. I considered turning back, to find my mate. I could just about hear him saying that we were in Jurassic Park. 'Nah ... we're nearly there.'
The steps stopped and we reached a flat section of the boardwalk, this one with railings. A view openned up, revealing distant hills covered in bush, some towering above the tree-ferns and smaller trees. Perdy tried to speed up, dragging me forwards ... to a sight that suggested a past long gone. A square Kauri tree, huge, timeless. I stood, transfixed by a vision. History teaches us that human greed is the main ingredient in our story. Even Perdy knew that we were in a special place. We just stood looking, until my mate came, camera in hand and look of disbelief at the heavenly life-form at the end of the boardwalk.
The sun broke through the mist and the birds sang again.

Posted by www.authorneilcoleman.com at 10:46 PM