I thought the Feijoa season was crap .. until...

This year has not been kind to my fruit crops. Firstly the Apricots and cherries came to nothing. Sure, they blossomed, but the rain came and knocked the delicate flowers off, meaning that the season was a wipe-off. My neighbour was a little luckier and eating the occasional juicy apricot from his tree was nought but a promise of undelivered bounty. My plums were only marginally better, after a beautiful crop last year. Oh well, at least I had the apples and grapes, along with new crops of citrus that are coming on now.

I was looking forward to the Feijoa season, but the terrible storm of January 5th put a hold to that. Then there was the possibility of the Guava Moth (The Guavas, the sub-tropical large yellow ones and the smaller purple variety, are being very kind, and I don't even mind sharing them with the Sunderland Bomber ... oops, I meant the Kereru, NZ's huge native pigeon, that one can hear from a great distance as they 'whoop whoop' on their bombing raids, sometimes leaving the trees in an almost drunken manner. Of course, The Feijoas are under the threat from different more sinister attack ... from the Guava Moth. Hort/research have a trap hanging in my Feijoa trees, and last year they found a solitary beastie. DO NOT complain when you come through  NZ Customs 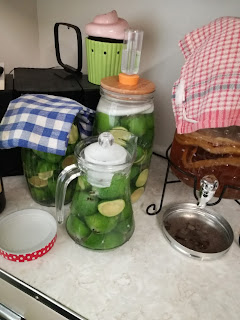 if you are checked. These blighters possibly came in because a fool did not comply with NZ's strict rules about bringing in fruit. Our economy depends on such measures ... to keep us free of unwanted pests.

I was not expecting my Feijoas to give me much more than a paltry few fruits. I noticed a few quite large ones when I was mowing my lawn, and today I went out to pick some off the ground. One does not pick them from the tree. Most Kiwis, where the fruit grows, know that the best Feijoas are the ones that fall to the ground.

Last night nature delivered something unexpected. Wind and rain visited Thames. When I searched under the trees this afternoon, the ground was festooned with large, beautifully ripe feijoas, a few hundred of them. I slipped into harvest mode, raking them gently from under the trees. Then we started out production-line. My mate cut them in half and I scooped out the scented-ice-cream-like pulp. The skins went into one container and the pulp in another, from whence we stuck it into plastic bags and into the freezer for later use.  The skins were then packed into jars, after rinsing, topped with water and a small amount of sugar. You guessed it. The skins are being fermented in two stages. In a few days, I will drain the slightly fermented water from the jars, discard the skins and add a little more sugar, poured the mixture back into the clean jars and leave them on the bench, with tight lids for the second ferment.

In a few days, I will put them in the fridge to stop them attaining an elevated alcohol level. I shall leave one bottle to 'brew' a little longer to see if it reaches a noticeable level so that the 'fizz becomes a buzz"!

Yes ... the afternoon has been a productive one. AS I have been typing this post, I have been enjoying a Kombucha flavoured with Guavas, with the first batch of my feijoa fizz back-blended into it. I can say it is ... mightily flavoursome!
Posted by www.authorneilcoleman.com at 9:28 PM