Earthquake in Thames---6.2 on the AFIB scale! 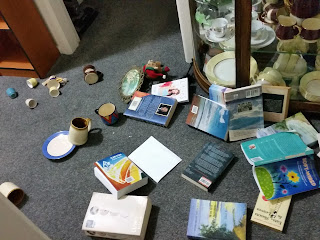 I had a beautiful day yesterday, culminating or should I say 'Colemanating' in a festive, fished-filled evening with a few glasses of excellent vino. The attempt at smoking the fish that the neighbour had sent over the fence (They were so fresh, they almost swam over!) turned out really deliciously moist and flavoursome. One glass turned into three---quite large ones. I suspect some of you know what's coming.

My brother returned to his home, which is just 1.5 KLS down the road and up the hill, from there he is able to observe the habitat of the fish we had just eaten. He also took a few home with him. I turned my attention to the Roskill (No---not my book) byelection where the Labour candidate totally creamed his opposition. I retired to my bed in a good mood.

About an hour later the 'feeling' became apparent. All was not well. I know it well and sure enough, the feeling grew into the AFIB relaity. Certain things happen to one's body, so I won't bore you with too much information! I just knew what was coming. About midnight the 'quake hit.' I had arisen to perform a biological function and and I felt dizzy. (What's new, you say!) Unfortunately, there is a book case in the hallway and it is a very tall and narrow one, not affixed to the wall!

I stumbled, crashing into the book case causing it to fall--- -- just ---OVER----but against the china cabinet pictured below. Inside that cabinet there are my precious hard-to-get Crown Lynn ceramics---quite a few thousand dollars worth. The noise was horrific and even in my addled AFIB state, I was acutely aware of years of collecting going down to the rubbish tip.

It really did feel like an earthquake; the noises of falling furniture and crashing ceramics, mixed with books. At that point, I knew I had to get  back into bed, until the attack was complete. Actually, the episode seemed to 'shock' my heart back into a more regular rhythm. Does that mean next time I have an episode, I just smash up a bit of furniture?  LOL

Rio came to the rescue, along with Perdy, who ensconced herself beside me in the bed, snuggling up close as if to contribute her little heart to my 'healing.' Bless her. In the meantime. Rio started reconstructing the damage, ascertaining the level of carnage. NOTHING broke in the book case (there were some prize ornaments in it) Everything was just scattered. He informed me that only one  piece (A Crown Lynn gravy bowl) lost its handle.

The news set me at ease and I was soon back to normal. That is the nature of an AFIB episode. I am surprised that the neighbours did not hear the crash, because it was momentous, but on reflection, part of the episode entailed a few weird symptoms, one of which is an accentuated hearing. Everything seemed louder.

The learning (again!) from this?  A glass of wine must be a standard drink---not one of the behemoths from the past. Furniture should be attached to a wall if it is likely to fall in an earthquake, be it from 'natural causes, or by ME!
Posted by www.authorneilcoleman.com at 12:21 PM