My journey back from Auckland was one of those where 'thinking' intruded way more than I would have wished. Luckily, I was NOT tired, as in the previous trip, because the eye issue was resolving itself.  I was also very pleased with the visit to the hearing clinic, where I had learned that the Government subsidy had lessened the cost of the new hearing aid. It seems that my hearing in my right ear has further decreased since my last 'test,' about 8 years ago, hence  the need for a new device to replace the one that was damaged by an exuberant Jack Russell, called PERDY!

My thoughts during the drive home to my beautiful Thames on the Coromandel Peninsula, turned to my Bariatric Journey. I laughed, thinking of the massive swings my body has taken; from the skinny youth (see the pictures) in the 70's to a huge dude in the ealry 2000s. There were times in between, when I reversed the trend , but then---old habits and the weight returned.

Perhaps some of you think that it is just a matter of putting less in and exerting a bit more energy so that 'more goes out,' in terms of calories. Yes, for some people, that is the simple answer, but we are all different, complex, and react in different ways to food and to the emotional underpinning that may or may not cause us to 'eat more than we need.' Maybe you feel quite judgmental, which will probably mean that you will stop reading at this stage. I have reached a point on 'my journey,' whereby I no longer care about negative reactions to how I have lived or continue to live my 'new life.'

Let's go back to the 70's. I enjoyed socializing and had a love of food, re the preparing and the consumption. I enjoyed entertaining friends and family, enjoying the many different cuisines, that had begun to thrust themselves' onto the New Zealand foodscape. Gone were the days of 'meat and two veggies.' I can well remember the massive meals I cooked, be it as a BBQ or as a roast with 'accoutrements!'

The serve-sizes were ridiculous, but that was the norm. We returned for seconds and thirds---and then the 'pudding!' I suspect it would not have been uncommon for me to consume about 4000 calories at one of the 'dinner parties.' I was NOT alone in this. The result of this over the decades  from my 20'sto 40's was a huge gain in weight----but it was a journey that had many 'ups and downs.' I started at about 68 kilos and by the time I entered the 'big stage,' I was more like 110 kilos plus, with many health issues.

I was not blind to the weight gain. My clothes, the pictures from the time, tell the story. I attempted to rid myself of the kilos---but---the trend was always----well---let's leave that for the next blog. For  now---look at the pictures, and I apologize for the grainy images, but we did not have high resolution in those days. next blog---'The Battle!

Thats me in the middle at about 21 and ---well the bottom picture---me again, after my failed battle! 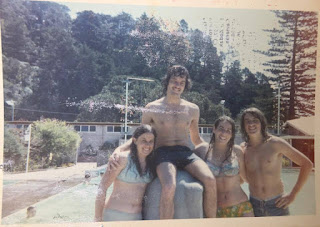 Posted by www.authorneilcoleman.com at 11:52 AM